Nathan Beard’s Journey Back Into the Studio 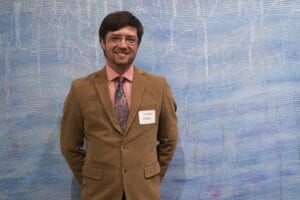 In my latest contribution to “Making Art in a Time of Social Distancing,” I spoke with St. Pete artist Nathan Beard about what it’s been like trying to make art during these past few chaotic COVID-19-fueled months.

When the pandemic started, Nathan Beard still had his job at the Dunedin Fine Arts Center. Of course he worried about the future. Like everyone else, Beard wondered if he’d get to keep his job, if his upcoming shows would be cancelled, if his art sales would decrease because more people are worried about money now.

“It was kind of nerve-wracking,” says Beard. “Part of me was like, I need to apply to these grants right away, especially to the Pinellas County one (the $500 grant) and the St. Pete Arts Alliance Grant. But at the time when those came out, I had a job… there was no actual evidential need.”

It’s hard to predict what your need will be at the beginning of a crisis. Unlike Ruth’s Chris, Beard worried someone else might need the money more. 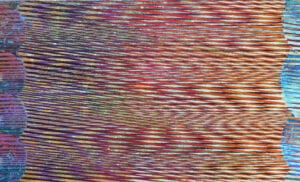 Even though the lines are dead straight, they appear to bend as they interact with the layer of lines below. It is as hypnotic as a dancing fire.

“Then the art center closed, and a few weeks later they were forced to put some of us on furlough,” says Beard, who was furloughed for two weeks.

“I thought this time would have been a really awesome opportunity to make a lot of work and really focus on the studio and not get distracted by worries and stuff,” Beard told Creative Pinellas.

“Was it, though?” I ask, thinking of my own struggles to stay motivated and focused during this pandemic.

“No, it wasn’t,” he replied without hesitation. “I couldn’t concentrate. I was worried about how we were going to pay rent. The time that I wanted to spend in the studio, I had to spend looking for a job or grants.”

Beard also updated his e-newsletter, so he could get his work in front of potential buyers in the absence of physical art shows.

When he finally returned to studio work, Beard suddenly wondered if his work was still relevant with everything that’s happening in the world now.

Exit Music #97 (Brigid’s Flame) was conceived during the COVID stay-at home period and forged in the weeks leading up to Summer Solstice. This painting is a meditation upon keeping the flame, forging strength through community, and resiliency in general.

“Should I be making something else?” he asked himself. “A more direct statement about what’s happening? What’s the role of the artist in all of this? In the end, I was just able to get back to work, and I was pleased with that.” 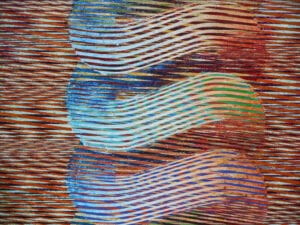 This was when Beard started painting Exit Music #97 (Brigid’s Flame). As Beard spoke with me about the piece, it soon became clear that he was processing the pandemic, the protests and the role of art in society while he was actively painting.

Beard looks back upon this time as an artistic metamorphosis, an incubation or gestation period chronicled in layers of paint.

“[Brigid’s Flame] went through a lot of stages,” says Beard. “First, I wanted it to be about social distancing. So I had these two forms at either end of this long skinny painting”

“Then it became about people longing for each other again, and wanting to meet in the middle.”

When the protests started, Beard thought, “maybe that’s what this is about, people coming together and trying to find something in common.” That’s how the central form came to have so many layers to it. “One is a straight up rainbow, speaking to diversity,” he explains. “The next layer was all the flesh tones. It just kept adding.”

As Beard contemplated the role of artists in these times, he considered that “maybe it’s to keep the flame of creativity and hope alive through our artwork.” These thoughts brought yet another layer to Brigid’s Flame — the flame of inspiration itself, represented by the central coil in the painting. 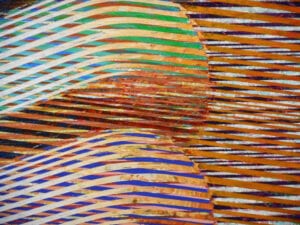 “I was thinking about flames, and keeping flames alive, and tending flames,” says Beard. “Then I really got into mythology.”

As Beard researched mythological figures, he was particularly drawn to Brigid, the Celtic goddess of healing, inspiration, fertility and the forge. “She’s like THE goddess,” says Beard. “She’s the goddess of everything.” In artists’ depictions, Brigid is often seen with flames meant to symbolize the flame of inspiration.

Beard’s work has always been abstract and layered, but COVID-19 gave it a third dimension.

It’s interesting how Brigid’s Flame parallels the way Americans responded to this pandemic in stages — from the introduction of social distancing to feelings of longing for our friends to a desire to help others and keep creativity alive.

“In the end, the whole process was about how I could give back,” says Beard. 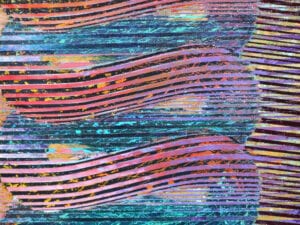 “Here’s this organization whose sole purpose is to lift women up, and to keep their fire or spirit going,” says Beard.

Beard’s now trying to tie all of his paintings to social situations and charities. He already has about five paintings in this series completed, all with ties to specific causes he wants to support.

Cases of domestic violence have surged during the COVID-19 pandemic. The mission
of CASA St. Pete is to challenge the societal acceptance of all forms of Domestic Violence.
CASA stands up to silence through Advocacy, Prevention, Intervention and Support Services –
serving thousands of survivors of domestic violence in Pinellas County each year.
casa-stpete.org