Making Art in a Time of Social Distancing 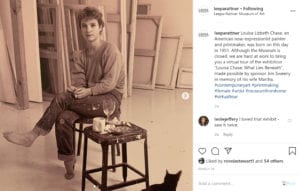 When art museums around the world temporarily closed due to COVID-19, a new movement began.

Museums around the world started sharing exhibitions online via the new international social media movement, Museum from Home. Simply type #museumfromhome into Instagram, Twitter or Facebook, and the world of art is cracked open before your eyes.

You can discover the Dutch golden age and view major works from the Italian Renaissance at the Louvre in Paris. . .  color in black-and-white tracings of Louise Lawler’s photographs courtesy of the Museum of Modern Art in New York City. . . or see the Rosetta Stone in the Egyptian Sculpture Gallery at the British Museum in London. 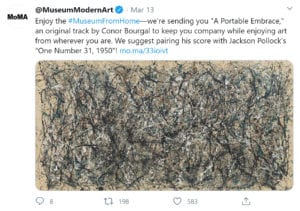 There’s no such thing as a local art show anymore. With #museumfromhome, any art show anywhere can suddenly go global — including art shows in the Tampa Bay area.

Like most social media movements, it’s difficult to determine exactly where and how #museumfromhome got started. The Museum of Modern Art in New York City was the first museum to use the hashtag after the World Health Organization declared COVID-19 a pandemic. But right now, it sure looks like the San Francisco Museum of Modern Art is running the show. SFMOMA posted their first #museumfromhome on Twitter March 14, then promptly started inviting museums from all over the world to join them, starting with the Louvre in Paris. 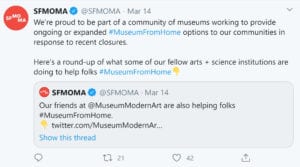 In Pinellas County, the Leepa-Rattner Museum of Art was first to hop on the #museumfromhome bandwagon, announcing their participation via Instagram on March 18, the same day they announced their temporary closure.

I was supposed to head to LRMA to write up their Luisa Chase exhibition. Chase is one of many lesser-known female artists the Leepa-Rattner Museum of Art chose to highlight in conjunction with Women’s History Month. Sadly, the exhibition was a bit overshadowed by impending doom, courtesy of COVID-19.

The Dalí joined on March 17, sharing a link to their online exhibit archives, which now include Midnight in Paris, Dalí: Record Mania and Discovering Dalí in Book Illustrations. 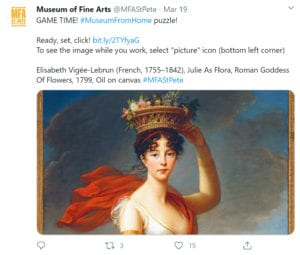 On March 19, the Museum of Fine Arts in St. Petersburg posted their first #museumfromhome #museumgame on Twitter and Instagram — a virtual jigsaw puzzle of Elisabeth Vigée-Lebrun’s “Julie As Flora, Roman Goddess Of Flowers”. Close-up views of paintings from the collection are another MFA #museumfromhome highlight, especially Joaquin Sorolla y Bastida’s Playa de Valencia (The Beach at Valencia) and Jasper Francis Cropsey’s Temple of the Sibyl, Tivoli.

The James Museum joined #museumfromhome on March 31 with their first weekly museum theme — Cowboys. The Cowboys theme features pictures and descriptions of six works of art from the museum’s collection, three movie recommendations, six short-film recommendations, a book recommendation, a children’s storytime video and art activity — and a few more surprises in the just-for-fun category.

I spent most of a day joyfully researching #museumfromhome options both locally and around the world for this article, and every day there is more content to explore.

As much as I’d like this pandemic to be over already, I also look forward to more lazy days on the patio with my laptop, enjoying the world’s art museums from home. 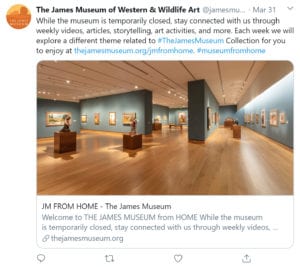