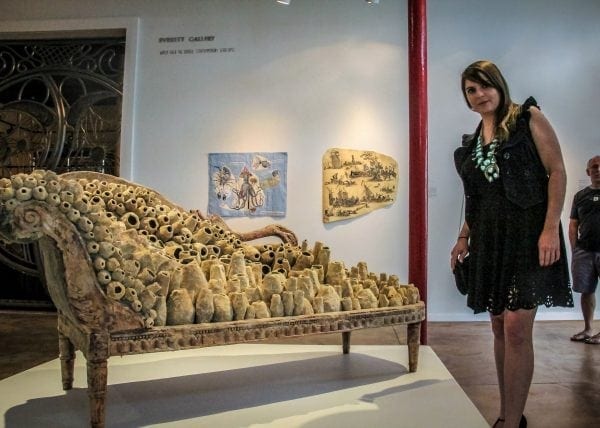 Clearwater-based artist Kate Helms with her mixed-media installation, Colony 1, created with resin, cloth, sandpaper and found chaise, measuring 74 x 28 x 35 inches. The piece is included in Water over the Bridge, showing through Friday at the Morean Arts Center. Photo by Daniel Veintimilla. 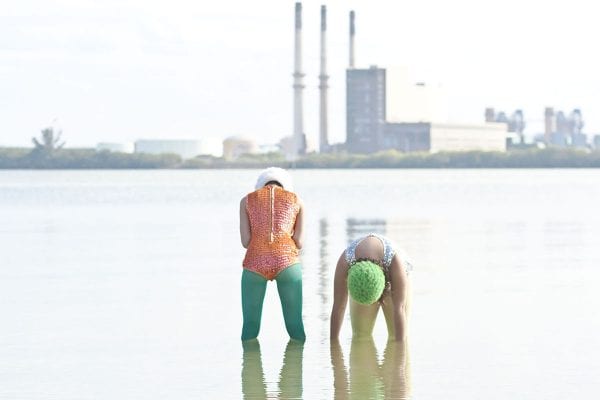 Florida faced not only a frightening close call with a hurricane in the past year, but other immediate and far-reaching implications around climate change have us a bit shaken and uncertain.

Considering the scope of the problem, we can’t help but beg the question why climate change isn’t tackled more by Florida artists.

Fortunately, we’re seeing a sea change. Artists from the Sunshine State (and others) are assuming the mantle for bringing attention to a subject that is as dire as it is censored — heck, the words “climate change” are even forbidden from being included in official documents, a mandate from Gov. Rick Scott.

At the Morean Arts Center, the comprehensive exhibition Water over the Bridge: Contemporary Seascapes displays both accessible and challenging works in a staggering variety of media. Curated by D. Dominick Lombardi of Valhalla, N.Y., and Amanda Cooper, the Morean’s Curator of Exhibitions, it’s a must-see for anyone who cares about supporting visual art and gaining perspective on the environment.

“Contemporary artists can very often be like the canary in the coalmine warning of the presence of deadly gases,” Lombardi wrote in the exhibition’s program. “Artists can bring to light the changes in sea levels, and the industries that contribute to the problem by simply exposing, with visual and written references, a very troubling reality that we are in the thick of a political battle for our very future, and the futures of the animals and plants we love.” 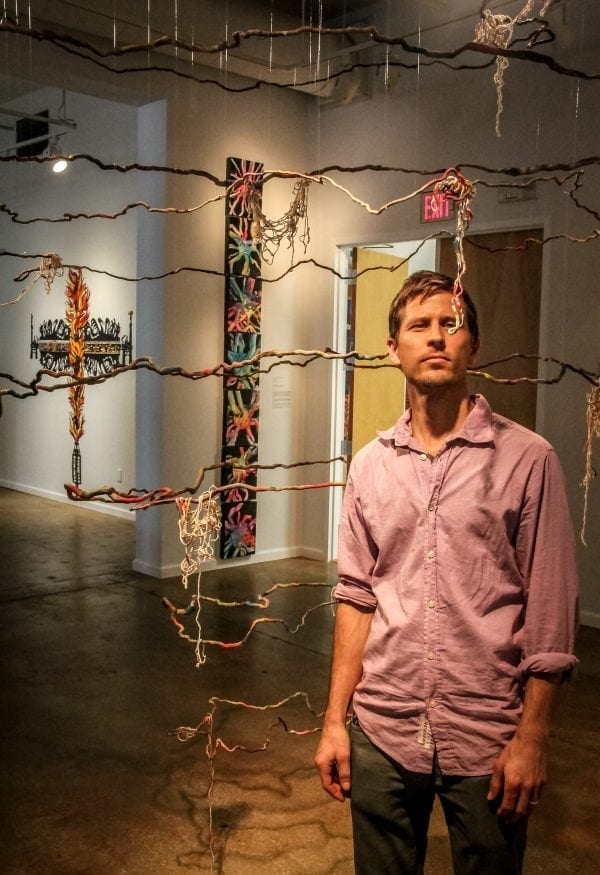 While some  may flinch when invited to a climate change-focused exhibition for fear of a heavy-handed downer experience, “Water over the Bridge” does much more. It elevates the discussion, offering as much that’s life affirming as is foreboding. It provides humor and whimsicality as well as punch-you-in-the-gut pathos.

“If you look at works by Don Doe, Bill Gusky, Scott Hatt, Dale Leifeste, China Marks and Selina Roman, you will see that they are raising our awareness of rising sea levels with a bit of humor,” Lombardi elaborates. “I also believe that we have to be thankful for the not-for-profit institutions like the Morean that will mount challenging shows that raise important issues like climate change. Since not-for-profits do not have to rely on selling the work they exhibit, they can show art that goes beyond saccharine seascapes and landscapes. Living in New York I am no stranger to rubberneck delays on highways. It’s a shame there is such great interest in slowing down to look at the carnage of a car accident across a roadway, while issues about the environment have become a nasty political battle.” 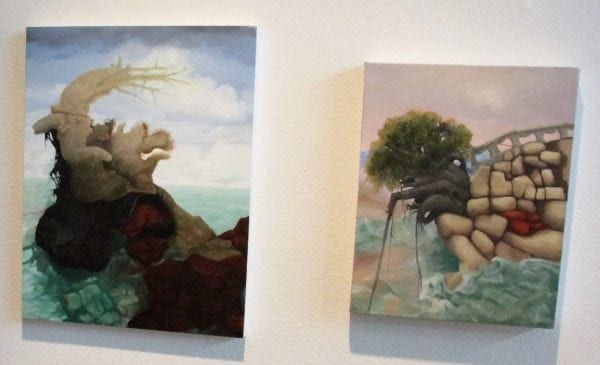 According to her artist statement, Kate Helms calls attention to the “parroted paradise … born of stout St. Augustine grass, primly planted medians, perfectly spaced palms, and gracefully arcing sprinkler showers.” Her works are “united by a desire to question cultural attitudes about the fabricated environments we inhabit and fetishize to the point of precarious delusion.”

Her installation Colony 1 (pictured top of page) proposes a creepy hypothetical scenario; it foresees the future state of an antique chair in an opulent Florida living room after its been submerged for decades — the chair’s once opulence is reduced to an absurd oddity as realistically crafted barnacles overtake it. It’s both a poignant and humorous look at how nature may conquer us if we don’t stop abusing it.

“I haven’t lost all hope and you shouldn’t either,” Helms said during her recent gallery talk at the Morean, adding that her work is not intended as a death knell but a call to action.  A Stormwater Program Administrator for the City of Largo, the scientist/artist has painstakingly tracked the effects of runoff and expresses no doubt that climate change is human-influenced. 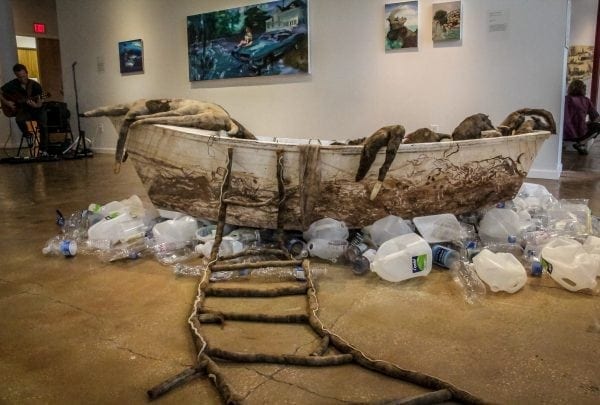 Babs Reingold’s mixed-media installation The Last Sea mirrors a more current reality, one that harks viral videos of wildlife strangled by plastic bags — a canoe filled with flaccid, nondescript small stuffed animal corpses and strewn with plastic litter. In addition, one of Reingold’s Luna Ladders hangs overboard. From one perspective, it denotes a “jump ship” attitude like those of wealthy people who believe they can just colonize Mars. On the other hand, the ladder could intimate one last hope for survival. Adding a touch of dark humor, the boat’s name, the piece’s title, spelled out in a boat name painted whimsically in a recognizable 1950s-style semi-cursive font. It’s a light touch on a dark piece. Ultimately, The Last Sea offers a chilling scenario, a proposition of the last major body of water on Earth. Its theme, a progression of Babs Reingold’s series “The Last Tree,” takes its inspiration from Jared Diamond‘s 2004 TedEx talk, when he asks, “What was the person who cut down the last tree on Easter Island thinking?”

The ideal exhibition to bring teens and tween students to, Water over the Bridge engages and elicits critical thinking and discourse; a highly prescriptive antidote to reactive social networking and comment-board trolling.

“This exhibition does succeed as a kind of protest,” Co-curator Amanda Cooper says in the brochure for the show. “If you ever thought about land conservation and wondered why it was important or whether you should care about it — one only has to look at these paintings to see what we stand to lose. Sometimes a beautifully and lovingly crafted work of art speaks louder than a megaphone.”

In tandem, The Morean Arts Center is also presenting a solo exhibition by an established artist who places an emphasis on the joy and wonder we feel while encountering nature. “Leslie Neumann: Manna from Heaven … and Earth,” shows the trajectory of an established artist and conservationist‘s work over a long period of time, focusing on the beauty of nature vs. our troubling current events. 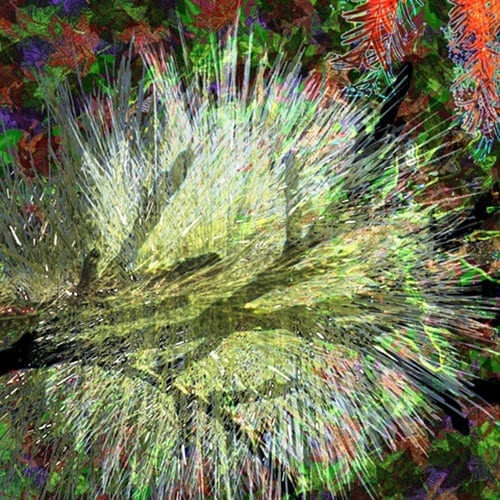 Also, if you Google “artists and climate change,” the first hit you get is the informative website Artists and Climate Change, which currently features as its top story a piece on a partnership with The Arctic Cycle,  Xavier Cortada and our very own Creative Pinellas to support the global reach of 90N: North Pole.

In the feature, “Communicating science through art: Introducing the work of Xavier Cortada, we learn about how Cortada has called attention to the melting of polar ice, which has begun melting at such an accelerated rate that the stake marking the geographical location of the South Pole, where all longitude lines converge, has to be relocated annually. “Cortada used flags,” author Jennifer Ring explains. “He planted 50 flags into the polar ice sheet, with each flag representing the location of the marker in years’ before. They formed a row, half a kilometer long, with each flag about 10 meters away from the next.”

Cortada’s project FLOR500 uses art to aid in reforestation.When the state turned 500 years old in 2013, Ring adds. The artist commemorated the quincentenary by initiating a campaign to plant 500 new Florida wildflower gardens across the state. In addition, he invited artists from regions throughout the state to draw each of the flowers. Local participants include Carrie Jadus and Kristen Gilpin.

90N, a solo exhibition of Xavier Cortada’s work at the North Pole is on display at Creative Pinellas through Sept. 2. An opening reception with the artist kicks off the exhibition on Friday, June 29, from 6 to 9 p.m. Gallery hours are Friday and Saturday, 10 a.m. to 5 p.m., Sunday noon to 4 p.m. and by appointment through Sept. 2.  Details at cortada.com/event/2018/90N

Arguably the world’s most urgent problem, climate change not only hits close to home on both the figurative and literal level, but offers a number of philosophical quandaries to explore — from the most elemental of human needs to more abstract, complex issues around stewardship of our planet, morality and evolution. 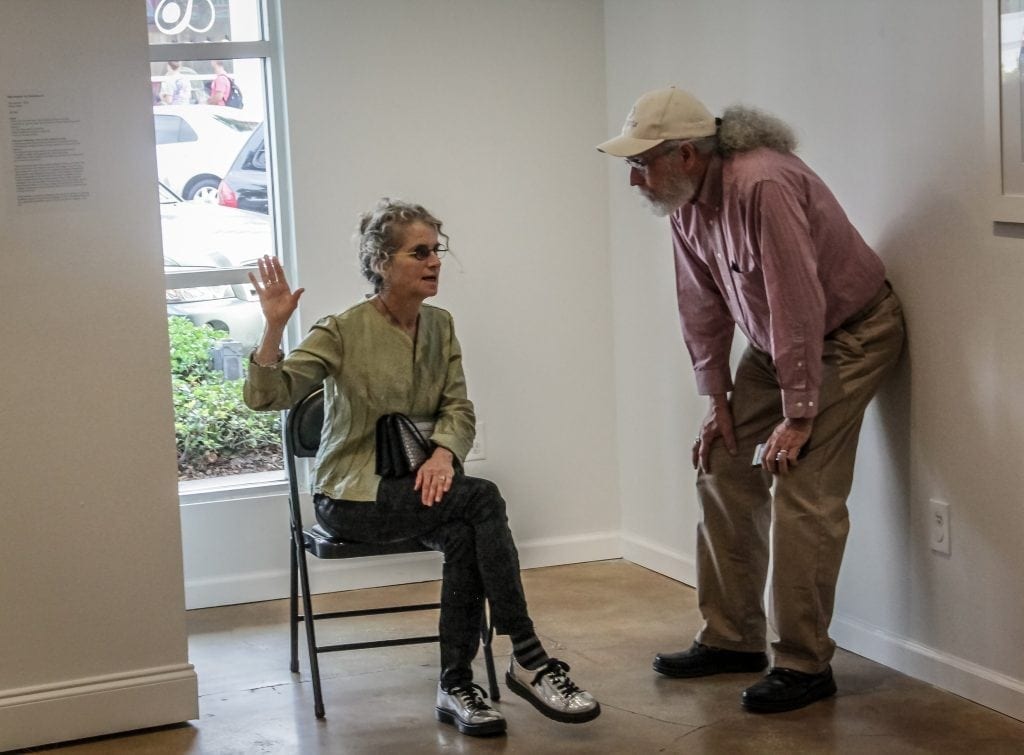 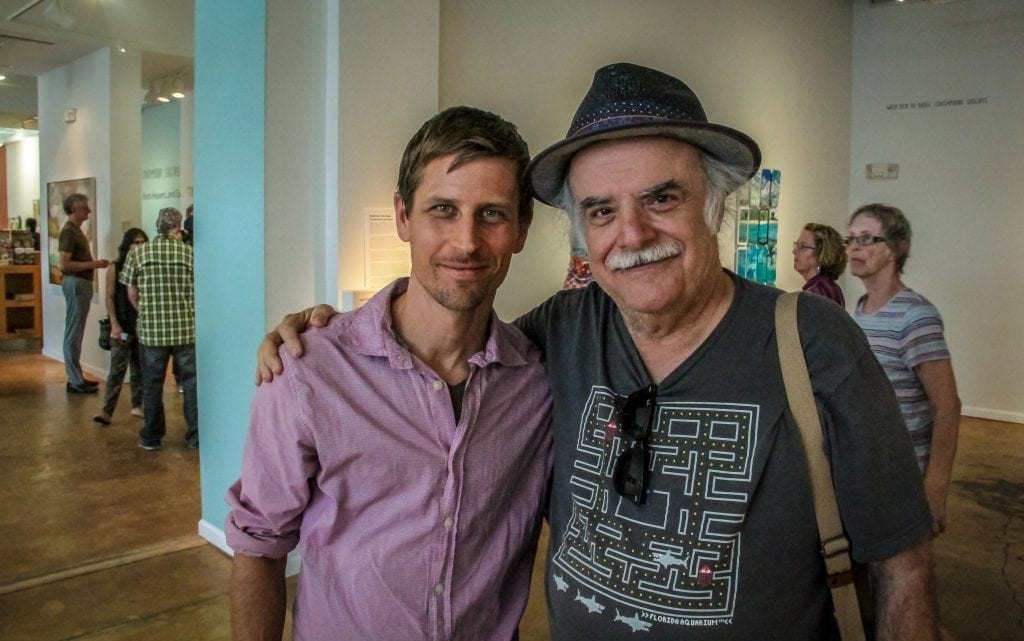 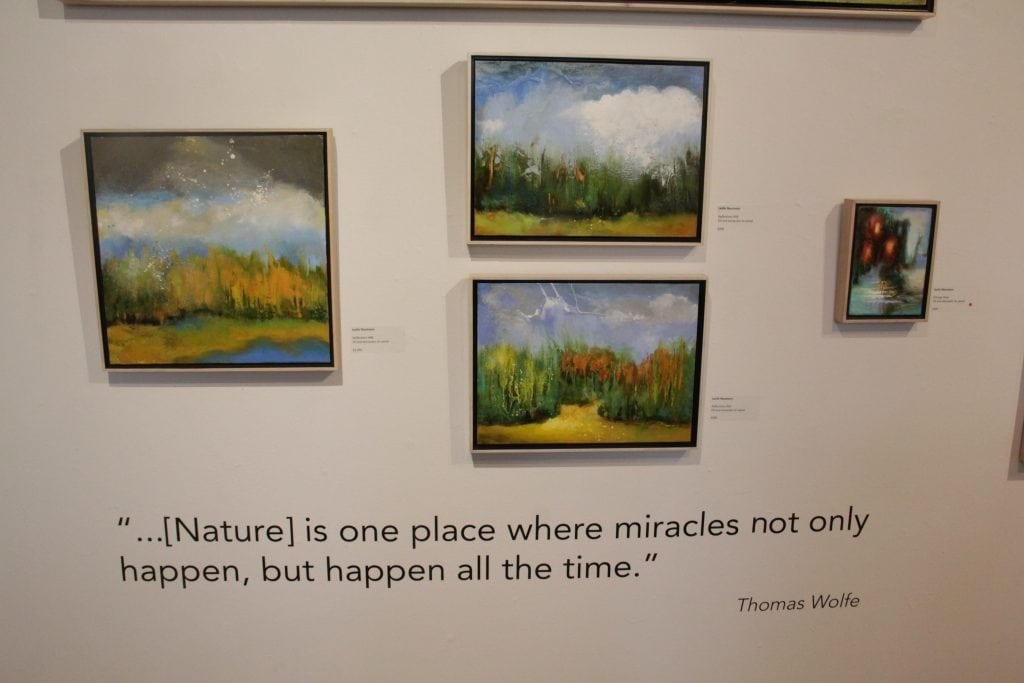 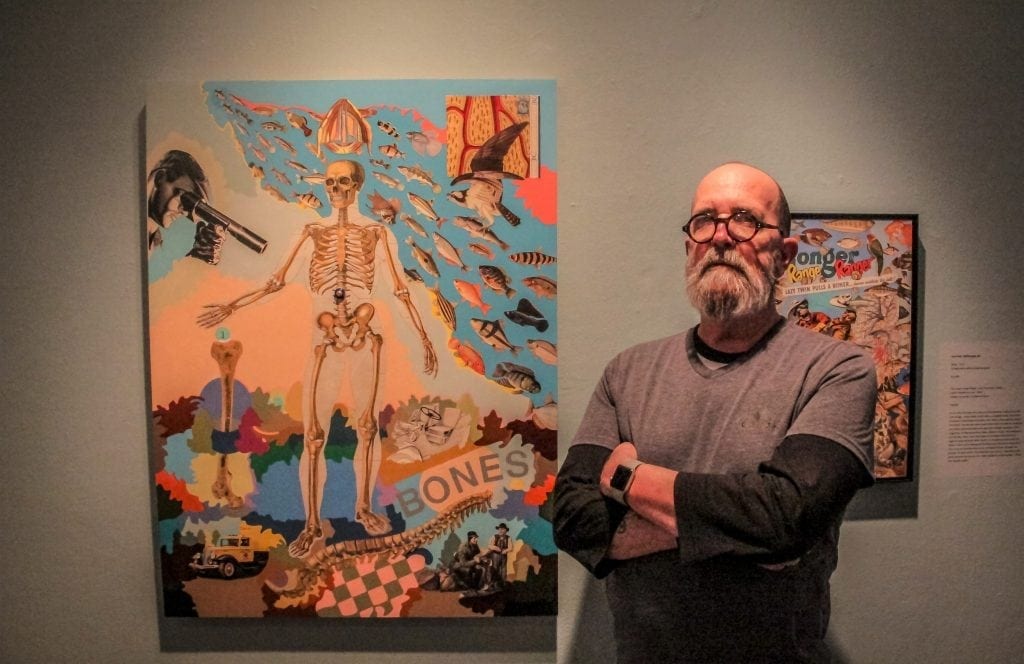