Midnight in Paris:
Surrealism at the Crossroads, 1929 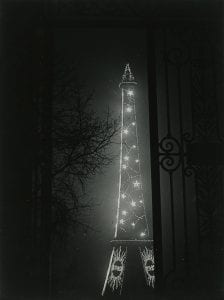 Picture in your mind a disco ball. It is a sphere that occupies space yet it reflects a myriad images of life unfolding around it.

This was Paris in 1929 — a city clearly defined by its past but a place of frenetic, outward-thinking artistic invention.

The newly-opened exhibition at the Dalí Museum, Midnight in Paris: Surrealism at the Crossroads, 1929, gives us a deep sense of just how necessarily diverse and original artistic output was at that time.

In spite of André Breton’s best efforts to keep the members of his Surrealist group in ideological, Communist lockstep, they were more dedicated to the idea of breaking boundaries through independent thought and action. Surrealism, in its truest sense, allowed this herd of artist-cats to resist being corralled, moving in many directions at once while still holding to their core ideals — freeing themselves and us from the bonds of imposed rationality.

It must be pointed out that Surrealism is indebted to the groundbreaking efforts of the Dadaists working before them in the second decade of the 20th Century. Rocked by the cataclysm of WWI, Dadaism shredded what was left of a linear progression of artistic expression in the West. 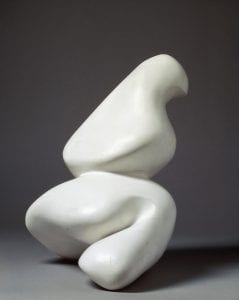 The Surrealists felt free to pick and choose from the creative debris, recombine the shards in new ways, and introduce new media and methods that had never been tried before, i.e. sculpting with ordinary wire, painting with sand, automatic writing and drawing, unorthodox film editing, etc. Materials were now put in service of the message and the sky was the limit.

It may be overly optimistic to say that there is something for everyone in this exhibition, but that is exactly the point being presented. You’ll find everything from a charming, child-like abstract painting by Joan Miró to the gruesome slaughterhouse photographs of Eli Lothar.

If you like small, highly detailed, dreamlike painted images that work simultaneously as still lifes and landscapes, then Pierre Roy’s work will delight you. If you are a fan of collage, Max Ernst’s mind-bending mash-ups gleaned from illustrated catalogs and books will fascinate you. 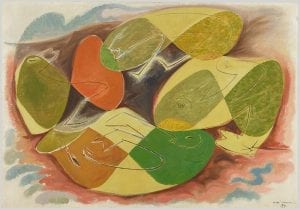 What makes this exhibition so important is this — one could argue that for the first time in the history of Modern Art, artists were free to use their chosen media in ways that amplified content. In other words, all previous academic rules governing how to apply paint, write, edit film, draw or sculpt could be ignored. 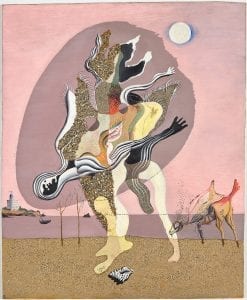 From this point forward, the perceivable process of creating art could itself be a reflection of the subject AND an indication of the artist’s psychological and emotional state. This is why so much of today’s art is deemed to be difficult. The work crosses the theatrical fourth wall, so to speak, and comes at us. The safe, protective veil of propriety is removed.

An added bonus is an exquisite 29-minute video written and performed by Roxanne Fay as Gala Dalí and starring Ned Averill-Snell as André Breton. Relax into a red velvet seat and watch Gala and Breton engage in a lively, funny and pithy discussion about the nature of Surrealism. You will walk away both thoroughly entertained and knowing all you need to know about why 1929 Paris was a breeding ground for artistic revolution.

The exhibition was organized by the Centre Pompidou, Paris
and The Dalí Museum and runs through April 9.