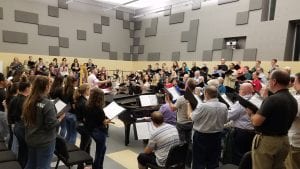 The benefits of joining a chorus go far beyond the singers, listeners, concert hall or church, says Liza Beth, a spokesperson for Chorus America, an advocacy group based in Washington, D.C.

Choral singing is the most popular form of participation in the performing arts, with nearly 43 million Americans currently active in a community choir. Children who join a chorus not only gain valuable life skills but are involved in a structure that encourages academic success, according to Chorus America’s Chorus Impact Study.

“In a society that seeks civic engagement and student achievement,’’ the report says, “the data suggests that it would be a mistake not to leverage the benefits that choruses bring to children, adults and the communities they serve.’’

Experience singing in a group 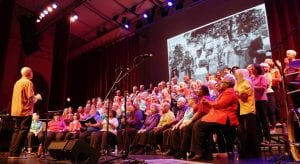 St. Petersburg’s One City Chorus welcomes both new and experienced singers at their Monday evening rehearsals.

As their website explains, “The underlying philosophy of our chorus is that singing in a group builds community and leads to new relationships and better understanding among people. It’s our hope that we’ll attract singers and audience members from the widest possible range of races, cultures, creeds and communities.

“We believe the world would be a better place if everyone sang.”

One City Chorus rehearses on Mondays at 7 pm at the Carter G. Woodson African American Museum, 2240 9th Ave. S. in St Pete. All singers are invited.

Find out more at onecitychorus.org

Singing in a group, where your voice is resonating with other people’s voices, just feels good – as music researchers know.

Here’s an article from Choral Director Magazine on the scientific proof. 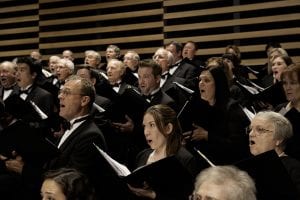 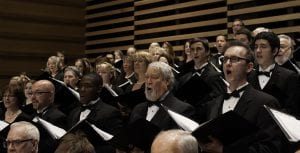 No local arts group has been more vocal about the place of music in our lives than the Master Chorale of Tampa Bay. Over the last 40 years, this polished group of sopranos, altos, tenors and basses has delivered on both the choral classics and new works, offering a tradition that listeners can call their own.

“The Master Chorale is the voice of the Tampa Bay area,’’ says Brett Karlin, the group’s new music director. “Every member of the chorus is a resident here, individuals who believe in strengthening the cultural fabric of our community.’’ 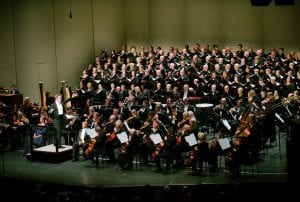 That’s key, because this is our chorus, and performances over the last four decades are as much a part of home as our people, politics and palm trees. Together, these concerts have become an indelible part of our culture, including the Passions of Bach; the Requiems of Brahms, Verdi and Faure; Mendelssohn’s Elijah; Mahler’s Resurrection; Orff’s Carmina Burana; Beethoven’s Ninth Symphony; Prokofiev’s Alexander Nevsky; Fanshawe’s African Sanctus; Walton’s Belshazzar’s Feast; and dozens of contemporary and commissioned works new to our ears.

Why does it matter? Because this music can transform anyone willing to listen.

“Singing in the Master Chorale allows me to experience the profoundly human and spiritual longings that can be expressed in no other way,’’ says M.L. Moore, a member of the chorus since 1989. 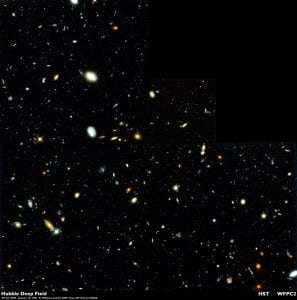 The legacy of the chorus – and the promise of its future – is part of the 40th anniversary season that began last spring with Haydn’s Creation with The Florida Orchestra. It continues on November 9 with one of the most unusual programs in its history: Deep Field: A Cosmic Experience, a collaboration with The Florida Orchestra. The three concerts feature Grammy winning choral composer Eric Whitacre, who wrote music to accompany a visual mosaic of images taken by the Hubble Space Telescope.

The film, orchestra and chorus will take audiences on an intergalactic ride through the Milky Way, past supernovas and nebula, a spiral galaxy and a distant realm billions of light years away, known as the Hubble Deep Field. The concerts also feature Lux Aurumque, a short choral work that Whitacre composed in 2000 on a commission by the Master Chorale.

The chorus goes back to its roots this March by returning to Bach’s St. John Passion, the first major work performed by the chorus under the direction of Robert Summer, who founded the choir in 1979. The concert featured 19 select singers along with the University of South Florida’s University Singers and a small orchestra.

By 1982, the group expanded to 85 singers and tackled Bach’s crowning work, the Mass in B Minor, the focal point of the week-long Choral Masterworks Festival in Tampa. In 1986, they became the principal chorus of The Florida Orchestra – the state’s largest performing arts organization – a partnership that allowed for a greatly expanded repertoire. 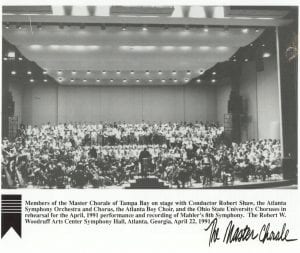 Over the years, Summer and subsequent music directors honed the singers into an instrument of impressive depth, subtlety and power. They reached a level of national prominence, and set a benchmark of quality for repertoire that demands an exacting degree of preparation and delivery.

It might be argued that the chorus changed the dynamic of musical life in the Tampa Bay area by making us hear masterworks as if for the first time. The great choral conductor Robert Shaw echoed this sentiment after rehearsals of the Durufle Requiem in Tampa in 1988.

“I think it’s an absolutely superb chorus,’’ Shaw told the Tampa Tribune at the time. “I think it’s the finest preparation I’ve ever heard in my life.’’ 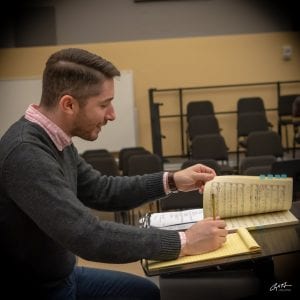 Karlin, 32, believes the legacies of Summer, Shaw and other talented leaders have kept the chorus in sharp musical focus. He hopes to build on that through creative programming, blending much-loved works of the past with new pieces that reflect our own time. Being enveloped in such magnificent art – in what he describes as “invisible vibrations that travel through the air and communicate emotion” – inspires awe.

“Music is the closest thing to magic,’’ he says. “It’s my religion, and it’s the most profound communicative experience humans can achieve.’’