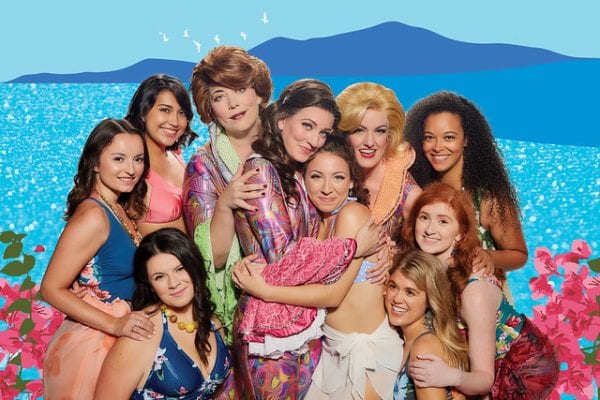 The women of Mamma Mia! Photo by Beth Reynolds

American Stage’s outdoor production is as warm and breezy as its outdoor venue.

While walking to our seats before American Stage in the Park’s Mamma Mia!, I was immediately struck by the gorgeous stage design by Jerid Fox. With wood slats painted like the ocean. jewel-toned tapestries and hanging lights as accents, the set gave me ideas about my future rich-hippie dream home, but for the evening, the imaginary home belonged to a single mother running a hotel on a random Greek Island.

Further building up my anticipation, a keyboard intro provided an almost prog-rock arrangement, letting us know the Abba-influenced jukebox musical was about to start. Within almost a second, the packed audience stopped their wine-soaked conversations and focused on the stage.

Julia Rufino, as Sophie, was the first to grace the stage and her talent in the song “I Have a Dream” clued us in to the fantastic night ahead. We figured out the plot — if you haven’t seen the musical or movie, it’s about  a young woman who has invited three men to her wedding because one of them might be her father. A weird concept, but it works better than the similar storyline of the 1980s Paul Reiser sitcom My Two Dads.

Alison Burns as Sophie’s mom, Donna, was a standout throughout. She belted like a local Idina Menzel but with a name John Travolta can pronounce. She captivated us in the second-act power ballad “The Winner Takes it All.”

The women in the cast dominated with more believable portrayals than their male counterparts, revealing more strength in hitting the challenging notes and seemed more authentic overall — not that it was a competition. But it was hard to beat the natural humor that Jennifer Byrne and Becca McCoy brought to the roles of Donna’s friends, Tanya and Rosie, respectively. McCoy, especially, received howls with her rendition of “Take a Chance on Me.” 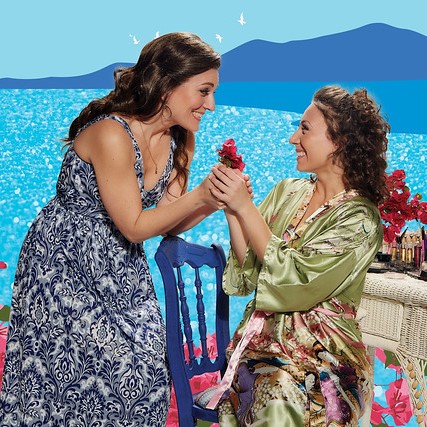 The collaboration of the production worked well in every aspect. The superb direction of  Stephanie Gularte, American Stage Producing Artistic Director, revealed in the smooth, tide-like set changes. The dance numbers, arranged by choreographer Shain Stroff, led to some amazing moments especially from Dance Captain Erick Ariel Sureda. Sureda’s moves, leaps and jumps were pretty spectacular. Costume designer Jill Castle did a great job keeping with the Mediterranean-bohemian theme which could have easily went the way of a Beall’s Outlet sale rack.

Sitting pretty close to stage right, I was able to see the talent and humor of Music Director/keyboardist Michael Raabe. From the first note, he was hard not to watch. I have not seen someone having such a good time doing, well, anything. He became an integral part of the performance but no spoilers — just keep a corner of an eye on him.

The cast and crew of the American Stage Stage in the Park have a hit on their hands with Mamma Mia! — and the standing ovation and the beaming audience, said so.

Mamma Mia continues its run at American Stage in the Park; Wednesdays-Sundays at 8 p.m. through May 12 at Demens Landing,Bayshore Drive and Second Avenue S., St. Petersburg; $20 to $50;  Click here for more information.