Making History
at the Leepa-Rattner Museum of Art 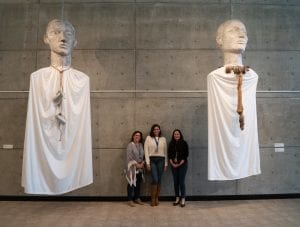 There’s an old quote that anyone who’s ever taken a course in evolutionary biology has heard at least once: “Nothing in biology makes sense except in the light of evolution.” The sentence first appeared in a 1973 essay by evolutionary biologist Theodosius Dobzhansky in the journal American Biology Teacher. I’d been studying biology for about six years before I heard it, but I immediately recognized its wisdom.

In biology, it’s all about survival and passing your traits on to the next generation.

Obviously, art is different. There are as many motivations for making art as there are artists in this world. But when it comes to understanding art, nothing is more helpful than understanding history. Art is almost always a product of the time in which it was made. One could say that nothing in art makes sense except in the light of history.

Leepa-Rattner Museum of Art curator, Christine Carter, expresses it as, “I love being able to put contemporary art into historical context. Being a fan of history, I think it’s more important than ever to break down those barriers people have or pre-conceptions about contemporary art — that they’re not going to understand it because it’s an abstract or something.

“When you put it in context, like Guernica for example, you’re able to comprehend a place and time in history, relate it to other things and understand it in the fuller picture.”

LRMA excels at placing modern and contemporary art into historical context. You can see it in their exhibition of items from their permanent collections, in their Made in Florida gallery shows, in their choice of local contemporary artists and traveling exhibitions — and more recently, in their community partnerships and programs.

The Leepa-Rattner Museum of Art is a museum with many stories to tell. Here are just a few. 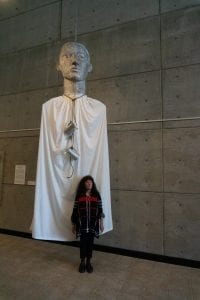 Deborah Masters standing in front of Dionysis, a sculpture inspired by her father

Through January 5, 2020:
Deborah Masters: Spirits
and ALTARed States:
From the LRMA Collection

LRMA is currently showcasing spirituality around the world with two exhibitions.

Contemporary artist Deborah Masters is known for her larger-than-life sculptures. Seven of Masters’ Big Spirits currently hang from the high ceilings of the Leepa-Rattner Museum of Art. Their clay heads are three to five feet high. Their ghostly white gowns fall another 10 feet to the floor. The LRMA crew spent about two weeks on lifts installing the 250 pound sculptures.

“[Masters’] work really offered us an opportunity to sort of pull from the depths of our collections all these seemingly disparate pieces of art and put them together in [ALTARed States],” Wilkins tells us. 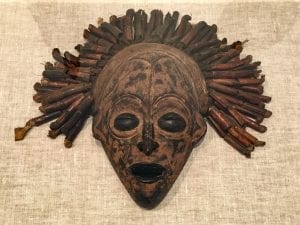 Rattner often addressed religion and spirituality in his artwork. The LRMA crew pulled five Rattner drawings from the collection for ALTARed States. Along with these, the exhibit showcases altar-inspired mixed media sculptures drawn from the Gulf Coast Museum of Art Collection, ceremonial masks from the Patricia A. and Thomas J. Lehnen family art collection, a trio of ritual-inspired photographs by Tampa-based fine art photographer Rebecca Sexton Larson and much more.

Masters’ monumental sculptures were part of the inspiration for a new partnership with the Tarpon Springs Area Historical Society.

On November 16, 2019, LRMA and the Tarpon Springs Area Historical Society paired a curator’s tour of Deborah Masters: Spirits and ALTARed States with a historical society tour of Cycadia Cemetery. Historical reenactors honored and remembered the stories of prominent Tarpon Springs’ residents buried at Cycadia Cemetery, as many of Deborah Masters’ Big Spirits honor those she’s lost (a father, a beloved pet).

Spring 2020: Luisa Chase: What Lies Beneath and Woman-Made: From the Collection 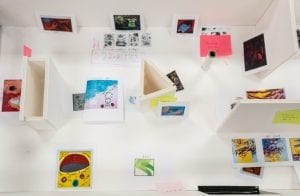 In 2020, museums around the U.S. are honoring the 100th anniversary of women’s right to vote by displaying and acquiring art made by women. LRMA kicks off their celebration of female artists in spring 2020 with an exhibition of Luisa Chase’s work paired with woman-made artwork from their permanent collections.

LRMA is collaborating with several collectors of Luisa Chase’s work on this exhibit, including local collector Jim Sweeny, the Polk Museum of Art in Lakeland, the Orlando Museum of Art, the Museum of Fine Arts in St. Pete and the Luisa Chase estate in New York.

The exhibit will allow for a much closer look at a female artist working in the male-dominated postmodern neo-expressionist movement of the 1970s and 1980s. 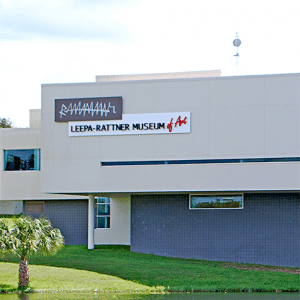 Summer 2020: Jared Ragland: Where You Come From is Gone

In summer 2020, LRMA is showing Tampa-based photographer Jared Ragland’s Where You Come From is Gone. For this series, Ragland photographs Native American sites throughout the Southeast using a 100 year old camera and mobile darkroom.

It’s hard to look at these desolate landscapes without feeling that something’s missing. LRMA is arranging tours of Pinellas County’s Native American sites to complement the exhibition.

“We’re really excited to talk about local history and really highlight the Native American cultures that have been here since the Tocobogans, for the past 600 years,” says Wilkins. 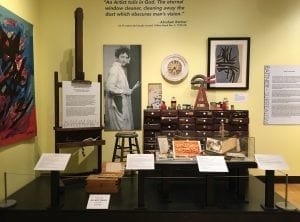 A recreation of Rattner’s studio for Rattner and Surrealism exhibition

Leepa was an artist from a family of artists. “[He] maintained not only his personal collection of his own artwork and what he’d collected, but [also work from] his mother, Esther Gentle, and [his stepfather] Abraham Rattner,” Carter explains.

“Every piece of paper [Abraham Rattner] ever drew on and every iteration of any print that had been produced, Allen Leepa had kept.”

That initial collection amounted to about 4000 works of art by Allen Leepa, Esther Gentle, Abraham Rattner and several of Rattner’s contemporaries in 1920s-1930s Paris. It’s one of the most significant collections of modern art in Pinellas County. 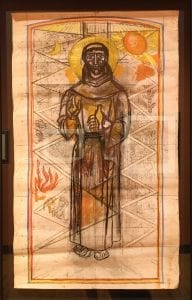 Rattner’s paintings are masterful, and I’ve enjoyed seeing them in multiple exhibitions over the years. But one of the most valuable portions of the collection — Abraham Rattner’s journals — are mostly hidden in the basement. “It’s probably my favorite part of the Rattner collection,” Carter shares. “The rich history that’s in his letters and his journals is amazing. He has a journal from 1968 where he talks about the day that Martin Luther King was assassinated and his thoughts on that.”

In a journal entry from September 2, 1939, Rattner writes of taking the last free tram out of Paris ahead of Nazi occupation. Britain and France declared war on Germany the next day.

Having both Rattner’s art collection and his journals allows the Leepa-Rattner Museum of Art to tell a rich story of life and art from World War I to World War II and beyond.

In Rattner’s Contemporaries in Paris (2017), the Museum told the story of art in 1920s and 1930s Paris using work from Rattner’s contemporaries, including Picasso and Max Ernst.

In 2021, the museum plans to tell the story of Rattner’s role in the development of modern camouflage during WWI. This will be paired with artwork from additional artists who survived war and have something to say about it. 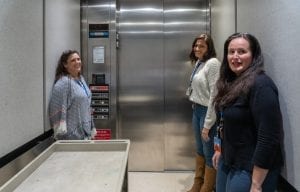 LRMA is still processing all the art in Leepa’s collection. “We’ve had a core of volunteers that have been with the museum since the very beginning who, week after week, for the past 17 years have culled through the collection,” Carter tells us, “and there’s still work, especially from Rattner’s collection, that we’re still processing after 17 years.”

“Everything’s cataloged, but I think it’s a matter of sort of filling out the different entries that we have,” LRMA Director Dr. Teresa Wilkins clarifies. “So like going back and learning more about this painting, when it was created and what is the meaning behind it. [We’d like to be] able to fill all that out in our databases so we can make new connections and put together a really comprehensive catalog of all the pieces.”

There is real history within the Rattner collection, much of it yet to be recorded. Wilkins tells me that LRMA is now working with St. Pete College to develop a new interdisciplinary class on creating history. “Students will be working in the archives here with us, digitizing things and creating online access for everyone in the world to be able to go in and see these images and learn the stories behind them — and how they impact us today, especially the journals,” says Wilkins. “All the fun anecdotes that we have. It will be great to be able to share those with the world.” 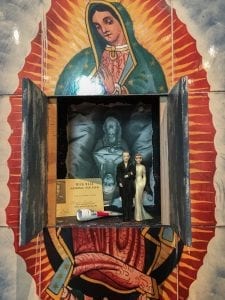 A look inside Jack Breit’s Jesus, Jack and the Velcro Bride, 1995, mixed-media and cibachrome photography, 58 x 19 3/4 in., from the Gulf Coast Museum of Art Collection

Carter was managing the Gulf Coast Museum Collection in Largo in 2009, when the museum closed. “They were facing the dispersement of the collection to different museums around the state. At the last minute, in the 11th hour, Dr. Cutler, who was the president of [St. Petersburg College] at the time…offered to take the collection in its entirety,” Carter recollects. “The Leepa-Rattner now has half of that collection.”

As with the original Leepa-Rattner Collection, the Gulf Coast Museum Collection tells a story — the story of modern and contemporary art in Tampa Bay

Christine Carter, who worked at the museum during its final 10 years, explains:

“The Gulf Coast Collection was around for 73 years. It’s a great cross-section of collecting in Tampa Bay from the 1930s to the time it closed in 2009.

“Georgine Shillard-Smith, who owned the property in Bellaire where Florida Gulf Coast Art Center was eventually built in the 1950s, was an art collector and an artist. She was amassing art from, at the time, major artists in New York like William Pachner and all of these 1940s and ‘50s era modern artists moving into abstraction.

“As the art center grew, there was that explosion of arts and cultural institutions in the ‘70s in the Tampa Bay area. [With this] came a rise [in] local talent…

“There was a hotbed of activity, kind of like there’s a renaissance now in the arts in Tampa Bay. But in the ‘70s, there was a renaissance in that things happened at USF, and you had Theo Wujcik and all of these different artists coming to the area. That was sort of a springboard to our contemporary Florida artists collection, which is what the Gulf Coast Museum of Art really became known for.

“When [the Gulf Coast Museum] collection came [to LRMA], our collecting focus, which was really centered around Abraham Rattner, all of a sudden had a secondary collecting focus of Florida artists,” Carter says.

You can always see work from Florida artists in LRMA’s Made in Florida gallery — not just work from the Gulf Coast Museum Collection, but also paintings from artists working in Tampa Bay right now, like Steven Kenny, Kevin Grass and Lance Rodgers.

It’s our now, but one day these paintings will be art history.

Find out more about
the Leepa-Rattner Museum here