Let’s all go to the drive-in at freeFall Theatre

. . .
Leave it to Eric Davis, Michael Raabe and the creative cabal of freeFall Theatre to come up with a new production that checks off all the boxes of what’s old and new and amazingly possible in COVID-19-era theater.

freeFall’s War of the Worlds – the first in a series of drive-in live productions to be staged in the St. Pete company’s parking lot – will offer campy terror with ample sides of local humor and slick multimedia presentations (like today’s news but with more wit and sass).

Inspired by Orson Welles’ 1938 radio broadcast of The War of the Worlds, the radio show-style performance re-creates the famed chilling announcement about Martian invaders from the POV of the program itself with live comedy and musical performances backed by a band instead of a studio orchestra.

Music Director Raabe and Executive Artistic Director Davis combined their talents to re-create the campy thrill of the War of the Worlds broadcast with the help of performers Eileen B. Lymus, James Martin Roberts, Robert “Spence” Gabriel and Heather Baird. The band, led by Raabe on keyboards, features Burt Rushing (drums) and Kenny Walker (bass).

Extra touches by way of concessions, projection screens and “radio sponsors” make it a must-watch as much as a must-listen. Davis clues us in on some of the unique aspects of the production.

“We really wanted to do something where being there live mattered,” he explains. “Because we’ve all been experiencing so much sort of long-distance connections to the arts right now with just various Zoom broadcasts and things like that, we wanted to do something that would not only be safe for everybody in their separate cars but that would feature elements that you could only enjoy if you happen to be there.” 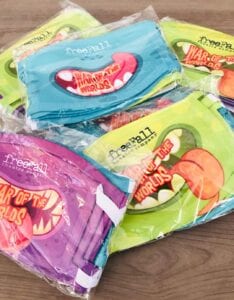 War of the World-themed masks, on sale by freeFall

While the show hearkens the late-1930s-’40s, don’t expect everything to be depicted in that time. The era of the sci-fi tale, after all, hasn’t always been that clear-cut.

“The original novel, of course, is set around the turn of the 19th to the 20th century in England,” Davis reminds us. “H.G. Wells wrote it commenting on sort of British imperialism, and at that time, the top of the food chain when it came to imperialism was Great Britain. So, in order to comment on what would it be like if another power tried to colonize England, he imagined that that would be aliens from Mars. And so the original novel does that – sort of like satirizing and critiquing and interrogating British imperialism through this sort of science-fiction story.”

H.G. Wells depicted the attack in the then-future year of 1939. A few decades later, Orson Welles performed his broadcast version on October 30, 1938.

“Taking a cue from Welles’ adapting the piece to be set in upstate New York, we’ve transported War of the Worlds to taking place around Florida,” Davis reveals. “People will hear places and things that they’re familiar with in Florida and it’s as though it’s taking place now – but it’s sort of like an alternate timeline that feels very different than the actual 2020 we’re living in.”

When asked if the show’s anachronistic aesthetic could be compared to noir comedy movies like Terry Gilliam’s Brazil, Davis gave us a resounding yes.

“That is exactly the vibe,” he says. “I hadn’t thought of the Brazil connection, but that’s absolutely the type of idea – an anachronistic present or future that feels a lot like the 1940s or ‘50s.”

As far as referencing the world in our present and fears of the future, Davis hints at some commentary embedded in the campy disaster movie moments of the show.

“In a tasteful way, we’re satirizing and poking fun at some of the things we’ve been dealing with over the last six months to a year,” he says. “But the show takes place in a world without COVID. Instead of a virus, we’re being attacked by Martians.”

Less heavy on dialogue with more emphasis on music and dance numbers, the production will include  projections of “virtual appearances by local celebrities, newscasters, drag queens, politicians … and Martians.”

Adds Davis: “I think that we’ve struck a really nice balance with the show, keeping it fun and light and entertaining, which is something that we all really need right now.”

War of the Worlds runs October 23 through November 22. freeFall Theater is located at 6099 Central Avenue in St. Petersburg.

Admission is by vehicle with up to four occupants.

Two sections of the parking area will be general admission, with cars in two rows. Vehicles will be parked in the best available spot, based on the size of the vehicle, on a first-come, first-served basis. Wheelchair-accessible spots are available.

The radio show being created live will be broadcast to your vehicle via its radio or your smart device via a free app.

freeFall requests compliance with posted policies, including the wearing of an effective face covering if audience members choose to leave their vehicle for any reason.

The theater has undertaken heightened cleaning procedures and policies to prevent the spread of COVID.

Tickets can be purchased at freefalltheatre.com or by calling 727-498-5205. Walk-up sales at the box office are temporarily unavailable.