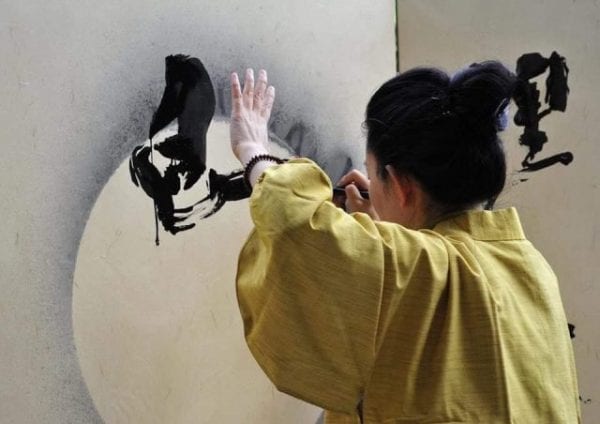 Ladies in Painting|
The Divine Feminine

Two Japanese women share their interpretation of tradition and contemporary art in a special performance exhibition.

In a fitting crossover of the work of two Japanese women artists, history and modernity take two different forms that combine traditional Japanese techniques and contemporary elements of experimentation and expression. 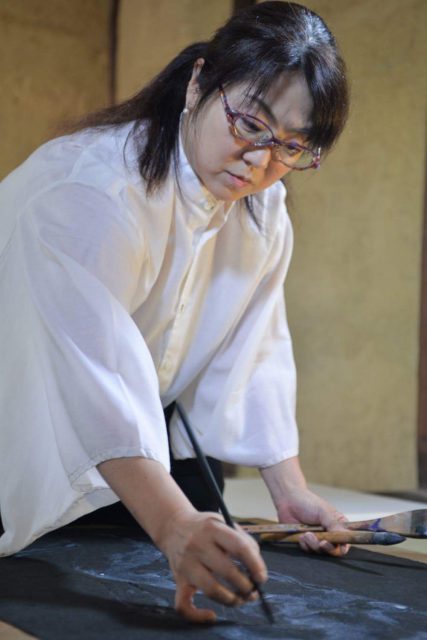 Calligraphy master Koho Kurihara’s work takes the form of sweeping and staccato full-body movements, using Japanese calligraphic techniques that have been passed down for centuries in her large-scale works, her body moving as a calculated extension of the brush she uses—her experimental dance-like performances seem to bring history into the here-and-now. Her performances are full of energy and allude to the Fluxus movement, though her final works of art are as meaningful and visually pleasing as watching the artist dance them into creation.

One can see in Ai Kawamura’s finished work the influence she feels from Georgia O’Keeffe’s work, her up-close floral imagery resting in conjunction with oxidized silver foil, a part of her interpretation of the Japanese Rinpa tradition. A possible homage to the extremely long history of the Rinpa art form, alive since the 17th century, Kawamura’s oxidized silver is representative of the passage of time. Like Kurihara, Karamura uses traditional Japanese brushes and inks, although contrastingly on a smaller and more delicate scale. Both women’s work is often created whilst accompanied by live music, heightening the traditional elements that live in their art.

This is both artists’ first time performing in the United States, and luckily there are a couple of opportunities to catch the performances.  Safety Harbor-based artist Noriko Kuehn arranged the event and organizes cultural exchanges between Japan and U.S.

The second performance will take place on Thursday, March 21, from 6:30 to 8:30 p.m. at the Dunedin Fine Arts Center for $10. The DFAC’s Palm Café will be open for food and beverage purchase during the event. dfac.org.