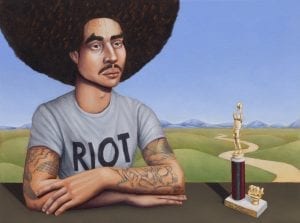 Jake Troyli is on his way. In 2017, the St. Petersburg artist received a Creative Pinellas Emerging Artist Grant in Visual Art to honor his talent, technique and promise in the field. To no one’s surprise that promise continues to be realized.

Now, he’s entered a new stage in his career —  one where collectors are starting to scoop up his work and gallerists have taken note, making room for him on their walls and in their schedules.

On the horizon, a solo show with the well-regarded Monique Meloche and her namesake gallery will round out a long, productive stretch.

In between a residency at the Skowhegan School of Painting and a fellowship at the Fine Art Works Center in Provincetown Jake took time to share his thoughts and the view from atop this shift in his career.

So a solo show next?

Yes, the group show that I was in in Chicago with Monique Meloche did really well. They sold out of my work.

Thank you. I’m figuring out what goes in the solo show. I’m in this weird stage now where I’m working and experiencing the art market more. Everything is happening really quickly. It’s super exciting but I have to be on guard all the time.

Yeah that’s the new reality, right? And people seem to always want to have a relationship with the artist, not just the work.

They can feel like they’re buying a piece of you, too.

So how do you do that?

That’s kind of been the trick. Making sure that I’m working with the right gallerists. Monique is amazing. Since her program is so good. . . The artists that she represents, this isn’t just some aesthetic shit. There is some conceptual meat to this work. So being with her, it contextualizes the work.

The way that I paint, using humor, people could do this quick read and be like that’s it, that’s all they care about. I don’t want that. So making sure I’m with her and in serious programs Is important to me. 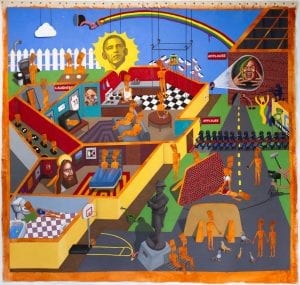 Let’s talk a bit about your style and the self portraits that are predominant in your work right now.

I draw a lot from classical painting, Northern Renaissance painting — specifically, the weirdness of it. A lot of the artists I look at in that way like Hans Memling, these painters that were super masterful. I think about it a lot and I think about my relationship to it.

I think that early on I developed this relationship with things and I don’t know if it’s a class thing. I think it might be a class thing, but the things that I really loved, but obviously couldn’t afford — I wanted to make ‘em. So if I couldn’t have it I wanted to make it. And I’m a student of painting — I want to paint really, really well. So I look to true mastery and to me it’s a level that I could never reach so it keeps me pushing.

So beyond your actual image in the self portraits, all of those pieces of you and your perspective are present in the work.

Yes. We form this visual language and for me it’s this combination of Mad Magazine and Northern Renaissance high high art.

Now I’m figuring out how to use it and make these images that are really important to me — and how can they also speak to the universal things. Definitely you want to walk these lines because it can’t be too personal, but without it being personal it’s not genuine.

And in the work there’s definitely this theatrical element to it. This figure that’s me, but it’s not me. It’s me, right? But it’s this persona and everyone is playing this part doing something different and existing frozen in this moment, but also they all exist simultaneously.

So I really think it’s something I can mine from, but I don’t just want to be painting self portraits. You want to make sure that you have many ways of working that give you room to grow and operate. So those large-scale works function in that way for me right now.

If I do a show I have one large-scale work and some of the portraits so that they bounce off of each other and they can contextualize each other in certain ways where I’ll take moments of the big painting, and repaint them in the classical fashion, like a vignette. 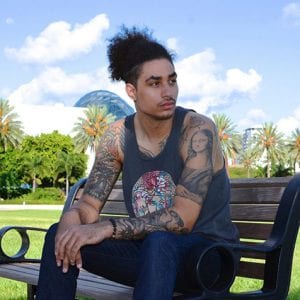 You’re going to be hanging another show relatively soon. The way you’re going to hang a show, are you thinking about that when you create?

Totally. My mom has always told me that this way of thinking is because I’m a Virgo. I’m so fucking organized, everything has to be planned out . . .

I think of shows — so right now I’m thinking about it. I know the big piece I’m doing. I know some of the moments that are going to be separate, the vignettes taken from the big piece.

There’ll be humor obviously, tongue in cheek, self-deprecating and self-critical but it’s there for the people who want to see it.

Otherness is obviously something that’s in my work as well. Being othered as a person of color and also being othered as a tall person. I walk around every day and some dude is like, “You tall as hell.” Yeah, I actually did know that.

Yes, and having the stereotypes as a tall man of color, I can guess the next thing people might say — but in your case you actually did play ball.

Right. I love basketball but I hate the NCAA, these systems that use people, more specifically put people of color through this grinder. But now I look at it and see all these lessons I learned from basketball, like I can compete with you but still be supportive of you.

For me, it’s not a hate-each-other type of thing, and I can also take criticism really well. . .  When they come into my studio and just roast me  . . . I understand that you’re trying to make me better — and also I just think it’s important to hear these critical viewpoints.

I think if you’re invested in anything that you do, you’re willing to take criticism.

What do you want to be doing in your career a year from now?

I want to do a solo with Monique and I want it to be great. I want to make the best work that I’ve ever made. Figure out where I’m gonna settle. After this fellowship it feels like Chicago is the leading option — LA would be good too.

I want to make that [show] go really, really, really well. And I want to get another solo show lined up. I just want to keep my momentum going, keep making.

You know there are a lot of residencies I want to do. There’s a list that I’m looking at. I just want to keep doing, keep an upward trajectory. I don’t ever want there to be a let down. There are ebbs and flows always but I want to fill a solo show and build another one behind it that’s amazing.

Troyli’s dedication and the arresting work that arises from it ensure this won’t be the last we see of him, on this arts coast and beyond. But he is well and truly launched, far from the banks and out into the wide, blue possibilities. No doubt, he’ll find many places to explore wherever he settles and for this next stage of his career at least, his work will be the discovery that rewards us.

Want to keep up with Jake?
instagram.com/jake_troyli/

You can hear a conversation with Jake Troyli on Arts In.