If Nobody Sees an Art Exhibition,
Does it Really Exist? 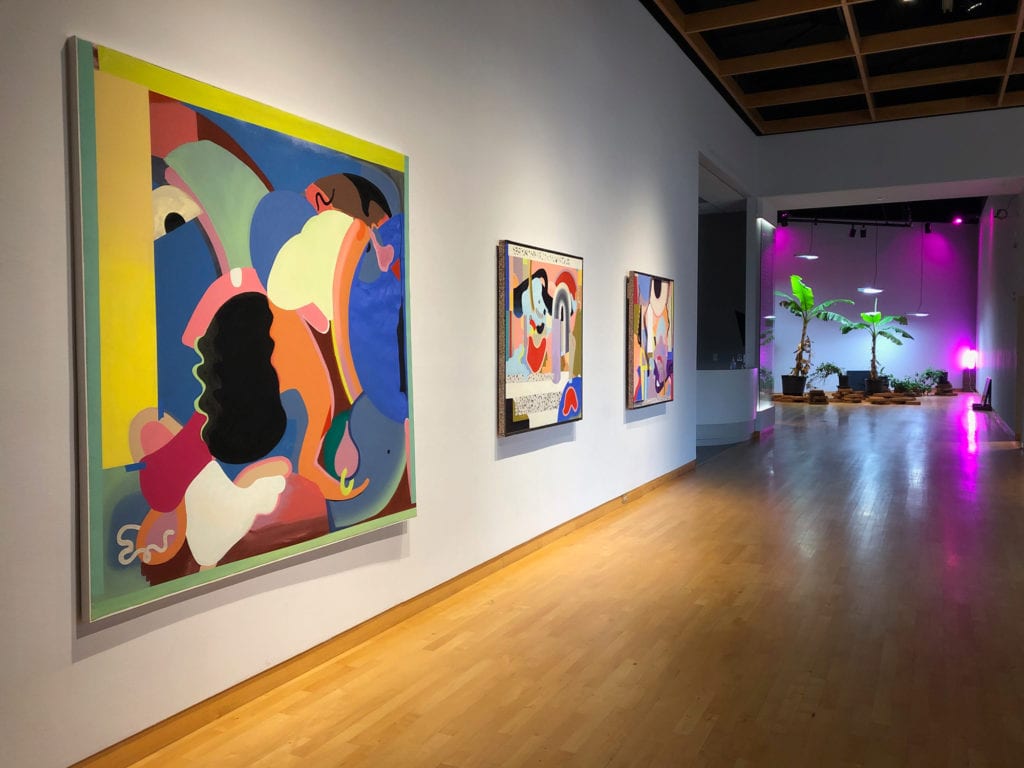 “If a tree falls in the forest but nobody is around to hears it, does it make any sound?” first appeared in the 1910 book Physics by Charles Riborg Mann and George Ransom Twiss.

Even earlier in 1710, philosopher George Berkeley originated this idea in his book, A Treatise Concerning the Principles of Human Knowledge, stating “to be is to be perceived.”

In a later version, Niels Bohr, one of the physicists who founded quantum mechanics, said that the Moon does not exist if no one is looking at it. His friend, Albert Einstein asked, did he actually believe that? Bohr replied that he would be hard pressed to prove otherwise.

Today’s parallel statement, “Pics or it did not happen” is a frequent retort to Twitter posts of events not accompanied by pictures.

So this ‘if it is not perceived, does it exist’ question has evolved through many human experiences — and now it’s happening at the USF Contemporary Art Museum (CAM) with the current exhibition, Battin’ A Hundred, the 2020 USF MFA Graduation Exhibition.

This show opened on April 3 and yet all these weeks later, has anyone seen it? 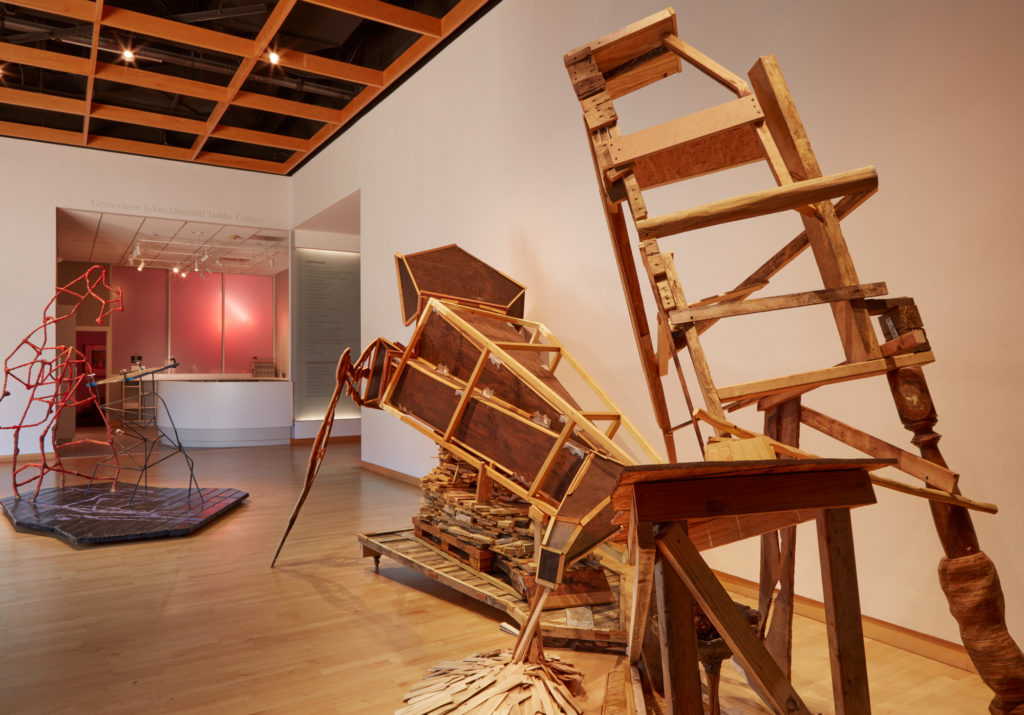 Under the Coronavirus cloud, and the ever-shifting governmental responses, CAM’s exhibition team spent a couple of weeks in the beginning of the lockdown with the MFA artists, installing their works — a culmination of their three years of study, research, experimentations, critiques, late night pondering, failures and triumphs.

Social distancing complicated the whole process since art installations are often a team effort requiring close proximity for safe maneuvering of the art works. But somehow everyone found their rhythm and space, and the installation was finished on time and no one got sick.

The opening reception was scheduled for 7 pm on Friday, April 3. But with the stay at home order in effect, the opening and all events were cancelled.

Now, the museum doors remain locked and the galleries dark. The exhibition inside is still unseen. And like Niels Bohr’s Moon, if no one is looking at it, does it exist?

Here’s a brief description of the exhibition, unseen by anyone,
but very real to each of the artists involved. 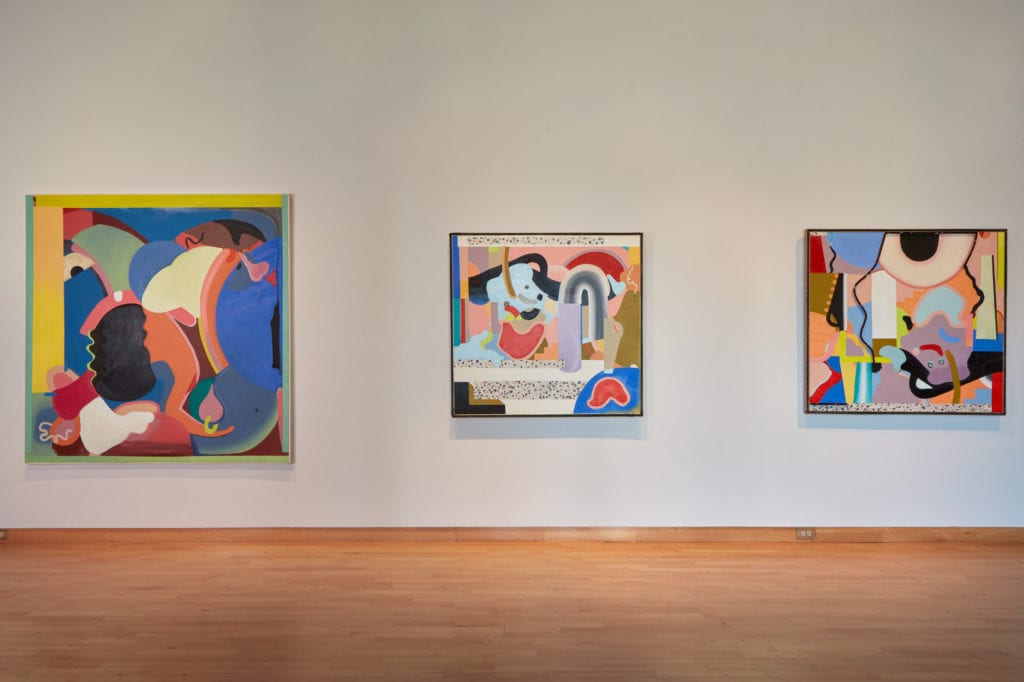 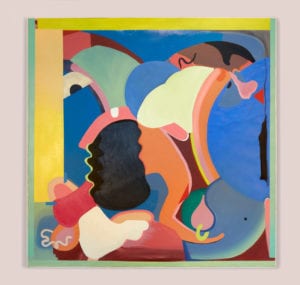 In the Lobby space is work by Jenal Dolson and Kyle Timberman.

To the right as one enters the museum, Kyle Timberman installed three awkwardly balanced sculptures/structures so contrasting to each other in materials, scale and form, that they very much belong together. 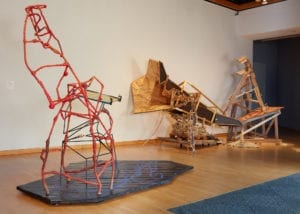 They are mysterious objects left by some civilization that future historians will mightily attempt to analyze, and trace their origins.

On the left wall hang three intriguing paintings by Jenal Dolson. A quick careless glance interprets them as idea boards collaged with samples of materials, colors, trompe-l’oeil and actual textures and shapes. But these are more deliberate and specific, referencing some organizational structure and humor system. What is actually being seen and revealed? Is that shape a character from some Japanese manga?

Turning right from the Lobby leads into the West Gallery. Here is Jezabeth Rocha Gonzalez and Jon Notwick.

Jon Notwick tacks to one wall a large printed image on vinyl of the first atomic blast. Seven life-size cutouts of people stand in semicircle facing the blast, their shadows falling behind. The figures, all male, look like tourists. 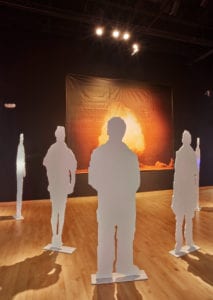 There is in fact, a few years back, a trend called dark or disaster tourism where people go sightseeing to war zones like Iraq or Afghanistan, or to disaster sites like flooded New Orleans after Hurricane Katrina. But the artist may have other perspectives on these places of human catastrophes. 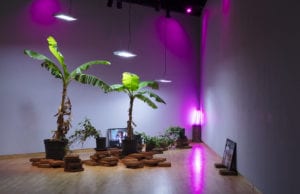 In the other half of the gallery, Jezabeth Roca Gonzalez creates an environment, maybe an enclosed courtyard garden, where pots of living passion fruit plants and plantain trees sit on adobe tiles under grow lights. Against the facing walls are two TV monitors showing domestic scenes of perhaps the family whose courtyard we are invading — or the artist is expressing aspects of her roots in her new country.

Occupying the middle floor, inspired by river deltas, Matthew Campbell arranged a group of islands he made out of concrete. In this in-between place where the river meets the sea, silt accumulates and often forms temporary islands, creating ever-changing and fertile landscapes. 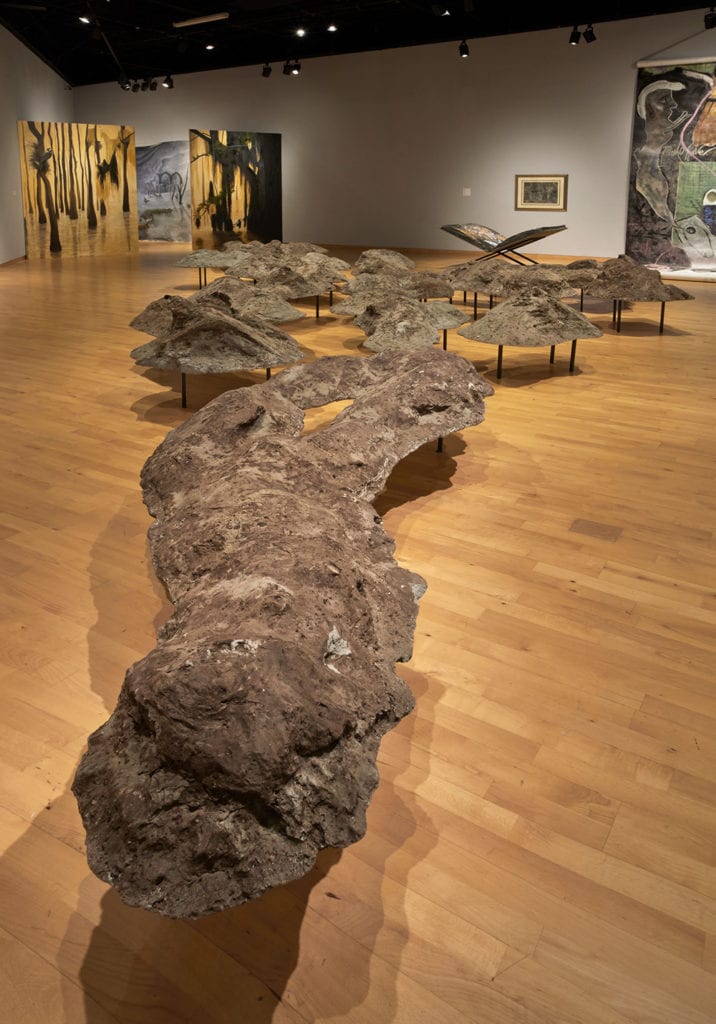 In the actual world, one such silt island appeared in the Bay of Bengal in the Ganges-Brahmaputra Delta region in 1970 and disappeared in 2010. During its existence the island was claimed by both India and Bangladesh. India at one point stationed a military presence there.

CAM’s galleries are triangular. On one of the three walls are four large paintings by Rhonda Massel Donovan. Total destruction and deconstruction of the well-regulated traditional flat canvas surface.

There are no stretchers, frames or forms of physical support. The paintings are on the wall somehow, draping down to sit on the floor. They are large mixed fabrics that have been torn, cut, folded, sewn, added onto and subtracted. The paint not so much sits on the surface as it impregnates like dye. They could be unruly tapestries.

But these are sands of the Middle East where wars took place and are still taking place, and people died and are still dying. Original images were gruesome and war-torn. Azar has sanitized the images by erasing the corpses — but tank tracks and other human traces hauntingly remain. 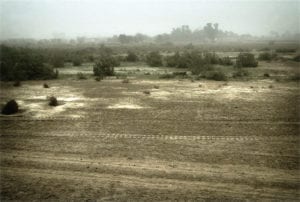 On the third wall is Mahya Amini. A heroic ten-foot wide scroll unrolls from 12 feet high, straight down and out across the floor for another ten feet.

Next to this sits a gigantic bookstand holding a gigantic book. Behind this hangs a smaller painting. These three pieces makes up a portrait of the artist, born of an ancient land, whose book, textures, primal drawings and somber colors tells a complex story, like tangled roots reaching deep into the Earth. 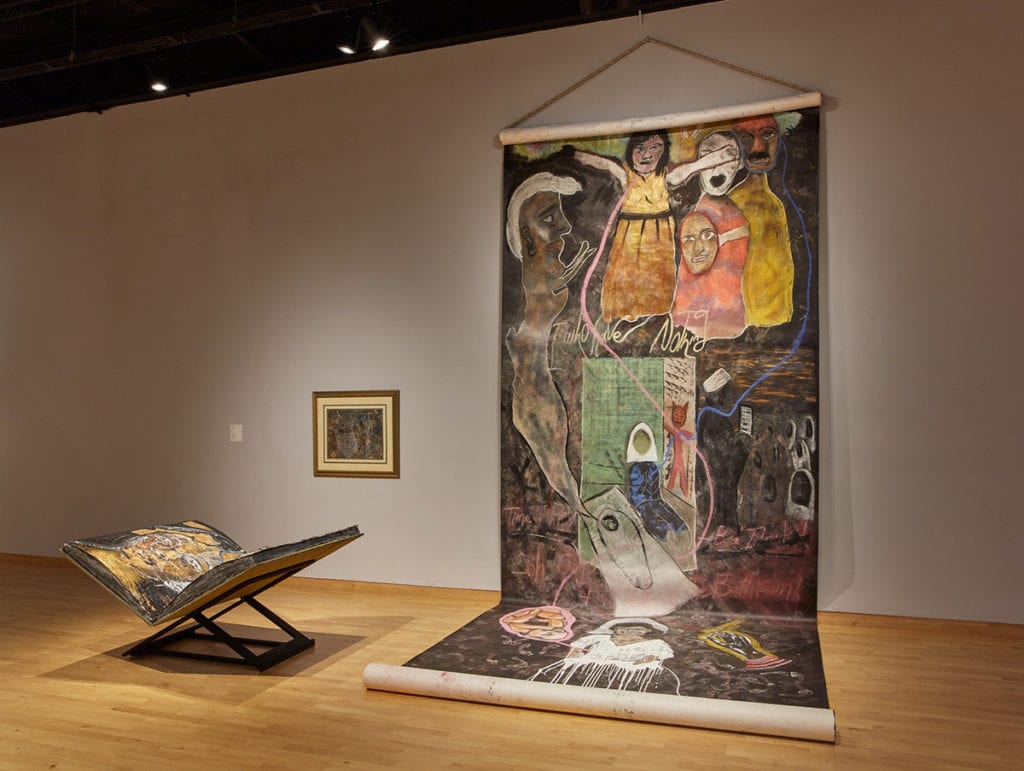 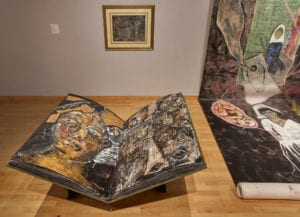 In the gallery’s infamous 45-degree corner is an epic painting installation by Rachel Underwood. The scale and how the artist wrapped the painting around the corner form its own gallery within the larger space. 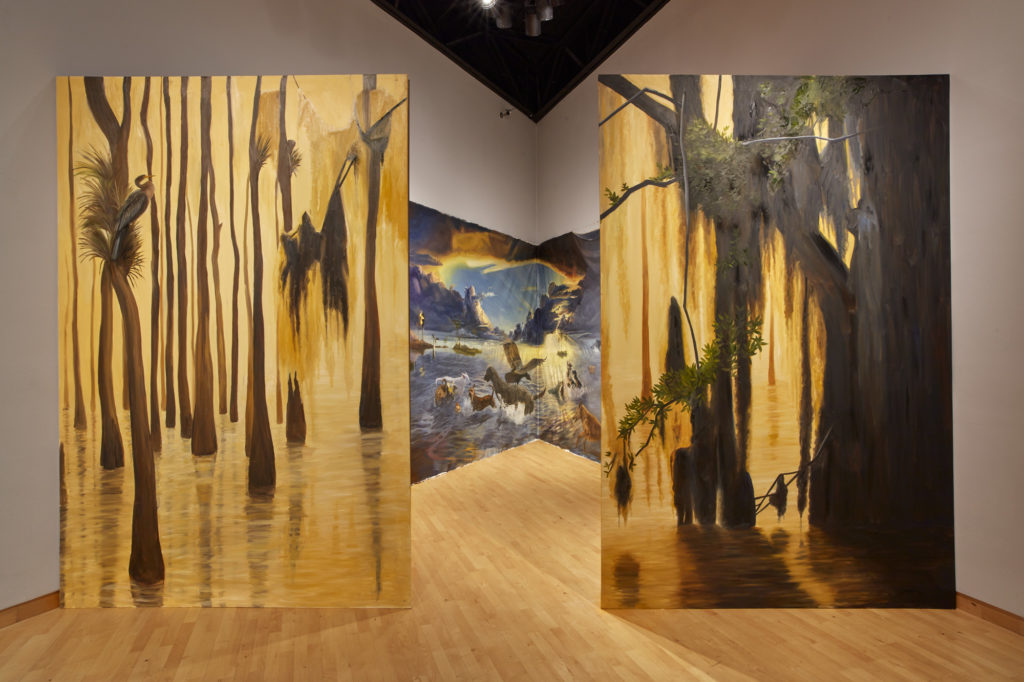 It’s a very Florida scene, reminiscent of the Highwaymen painters. The entrance is through a diptych painting of cypress swamps — with a panoramic view of the ten-foot tall by 50-foot long painting. In the apex of the 45-degree corner is the iconic Florida sunset, or it could be sunrise, with dogs and wildlife and an aircraft carrier. 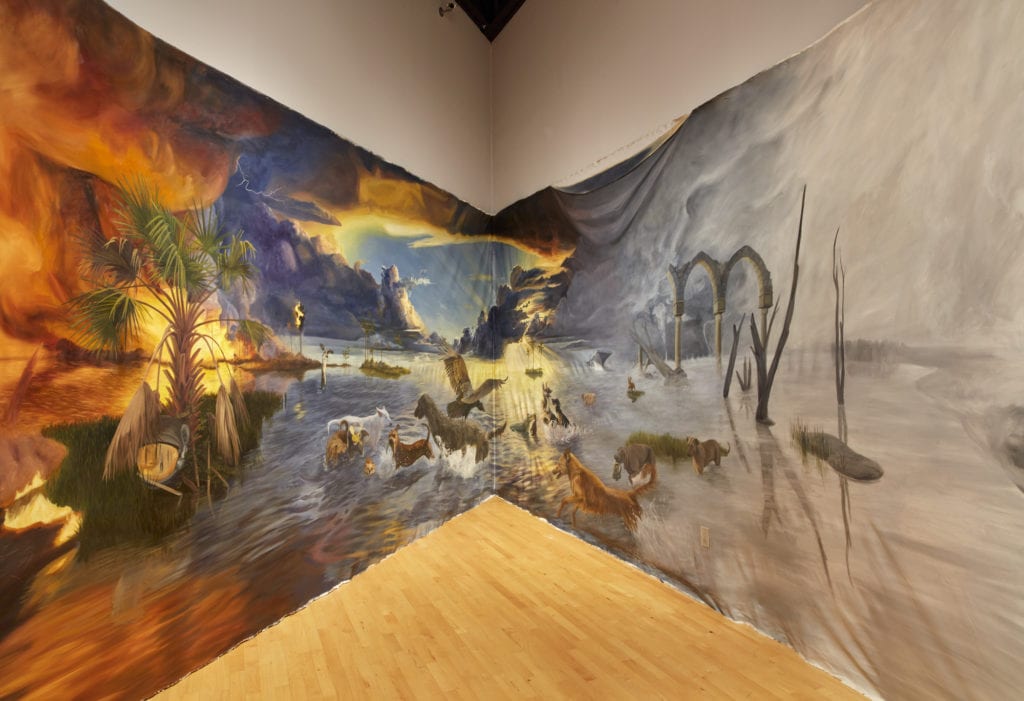 On either side is a progressively altering view of the environment — on one side sliding towards a bleak white winter, and on the other side towards scorching uncontrolled fires.

In an elongated space that connects the East and West Galleries architecturally, is a corridor. Many artists have created fascinating projects there. 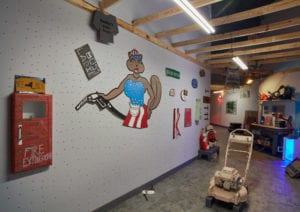 Now it’s Ash Lester’s garage! Stoop under the partially rolled-up garage door and enter this elongated space. Like many real life garages that no longer have room for cars, the space has been converted for other purposes. A hint of Pee-wee Herman’s playhouse, — but many years later, it’s a garage with his tools, guns, workbench, trophies, lawnmower, fridge, fantasies, knickknacks and stuff of everyday. Objects, while retaining some original semblance, are all a bit morphed and distorted.

These are the ten artists and their works, but no one will see any of it.

Maybe a loophole in reality? Not able to physically gather, CAM organized a virtual opening on the scheduled night, using the Zoom video conferencing platform. Pictures of the exhibition scrolled continuously as people logged in from wherever they are. Each artist spoke a bit on their work. There was familiarity, but with tentative steps of entering new territories.

Many poems and songs speak to such moments, maybe this by The Kills: 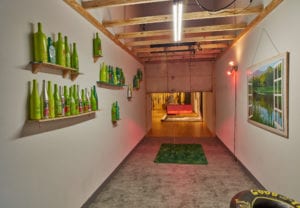 The USF Contemporary Art Museum is using other means to make the exhibition visible. An exposé of each artist, with pictures, is up on CAM’s website and Leslie Elsasser, Educations Curator, is posting podcast interviews with each artist.

There is also a catalog for the exhibition, available in both a physical printed edition and in a digital version.

Links to all these videos and other related materials can be found on the CAM website and Facebook page. 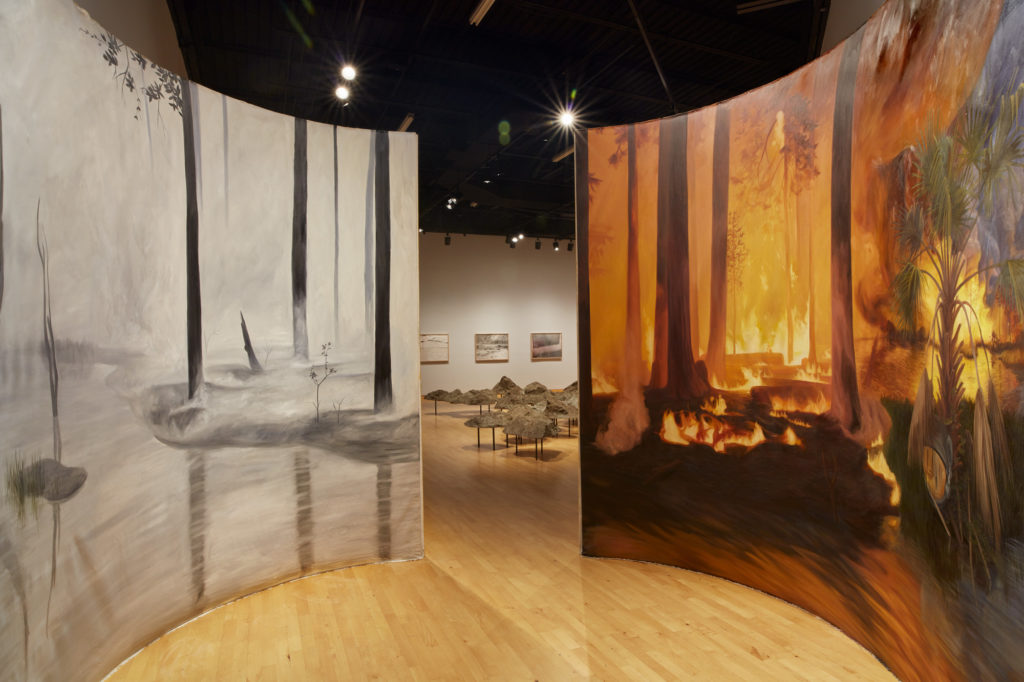