How My Artistic Practice Has Changed During the Pandemic 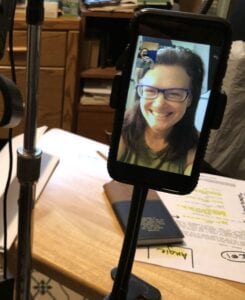 The new way of auditioning, courtesy of Becca McCoy

Where do I begin to enumerate the changes that 2020 brought to those of us who work in the theatre? Of course, we cannot rehearse, perform, audition, teach or take classes in-person. Our contracts have morphed from being under the auspices of one union (Actors Equity Association) to those of AEA, SAG-AFTRA, or a combination of both (after a very public fight between them), changing how we are able to accumulate work weeks or monetary levels to gain access to health insurance.

Further complicating health insurance available through union work is the protracted shutdown of the highest-earning contracts (the former and recent LA hiatus in response to the ICU crisis there, Broadway and tours), causing both unions to restructure their health insurance offerings.

Contracts I have been offered during the pandemic started out as full salary/benefits and got smaller and shorter as COVID has dragged on and theatres have become more stressed. Many theatres operate on a rather thin profit margin and I am sure we will be missing many of our regular employers by the time we can return to live performance. We all know theatre staff who have been furloughed.

It is notable that other countries have been able to return to live and on camera performances faster than we have because of their government’s response to the pandemic, even when they have had to go to various phases of shutdown several times. In addition to a renewed interest in filming in studios in order to exercise more control than possible on location, American production companies have traveled to Australia and New Zealand in order to film their projects. We have a pianist friend who was back performing to full houses in Australia before their last shutdown. French theatres have resumed performances. 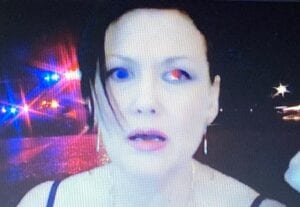 The obvious “new media” has been that of producing online theatrical content via Zoom, either live or edited together in post-production similar to film or TV. I don’t feel we have broadened our audiences but we can now perform with actors who live in distant states, even if we have had to become our own costumers, prop mistresses, camera techs and crew! Theatres have reimagined their venues beyond the Zoom screen, from empty storefronts (Miami New Drama) to parking lots (freeFall).

One hundred percent of auditioning takes place in the actor’s home in the form of self taping or, more occasionally and mostly for on camera work, online live auditions. I’ve heard that several episodic auditions (those for television series) have asked actors to tape the given scene first as they would regularly and once again while wearing a mask!

The downside is we are having to come up with new ways of relating to those on the opposite side of the table, since most traditional small talk is eliminated in this format.

The upside is we can increasingly be seen by casting and directors across the country, and be considered for roles in other markets than our geographical home. Which in some ways can lead to another downside – we are literally auditioning with every other actor of our gender and type in the whole country and sometimes abroad.

Speaking of abroad, I was able to study with a casting director located in Sydney right before the pandemic forced these changes upon us. Now, more and more acting studios are offering their classes online, again opening classes and teachers who were previously only available to actors in their particular market to actors across the country. 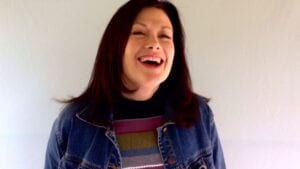 A still of an assignment for Self Taping School from The Audition Technique in Sydney, Australia.

I believe some of these changes will continue once we can again gather together safely. Self taping is here to stay as well as some form of online theatrical presentation. It is my hope that new platforms will be developed for both, as Zoom and other applications made for corporate distanced meetings are woefully inadequate when it comes to artistic control.

I also hope there will be some cross-pollination between English-speaking countries’ theatrical, film and television communities, furthering artists’ opportunities and cracking open the accepted American “look” of self tapes. Technology and necessity are forcing the unions’ hands to modernize and rethink older restrictions. I believe we will see a turnover in elected union officials within Equity as members respond to what many feel has been a lack of leadership in this crisis.

All of that said, I have been extremely lucky to have worked as much as I did in 2020 and to be able to connect with colleagues old and new online. Kudos and thanks to those employers who made that possible.