Her World in Focus

Women Photographers from the Permanent Collection 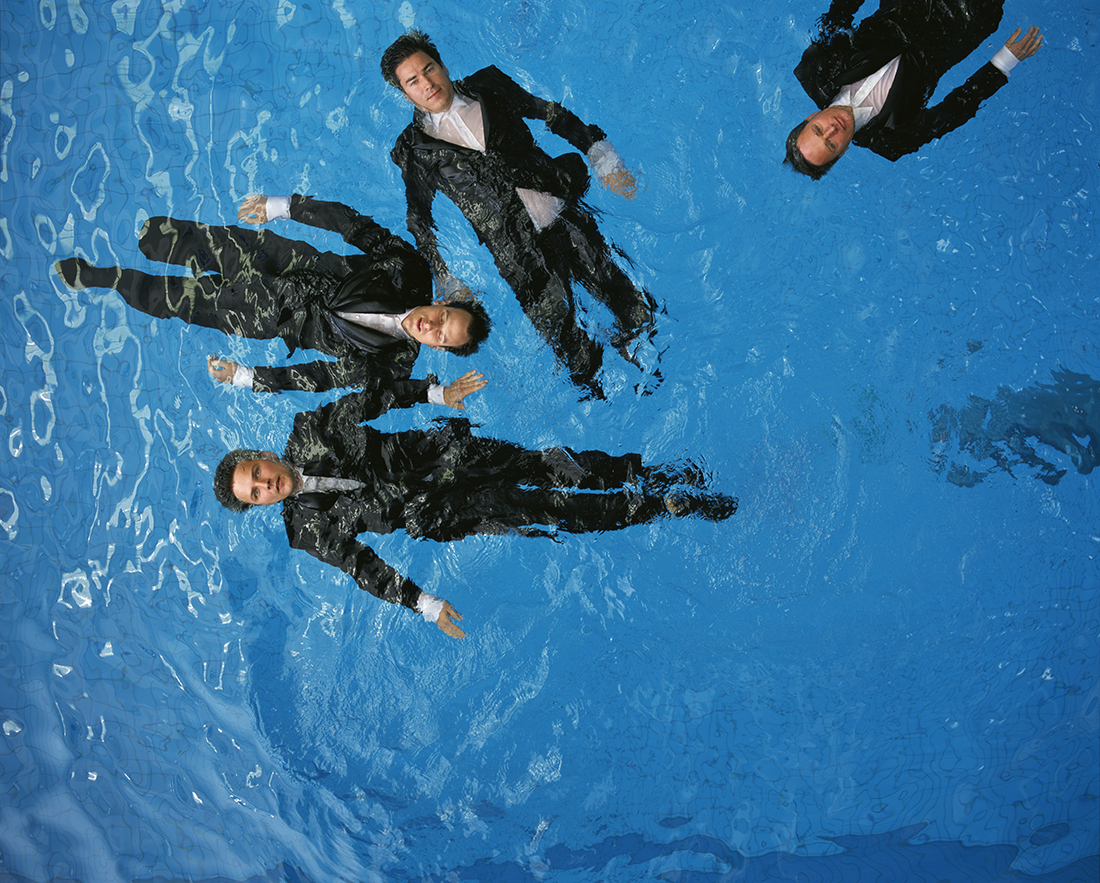 . . .
Congratulations to the Tampa Museum of Art (TMA). They celebrated their 100th anniversary in 2020 in part by presenting a series of exhibitions drawn from their permanent collection. Photography is a large part of the Museum’s holdings, so it follows that these shows would include a gallery dedicated to photography. 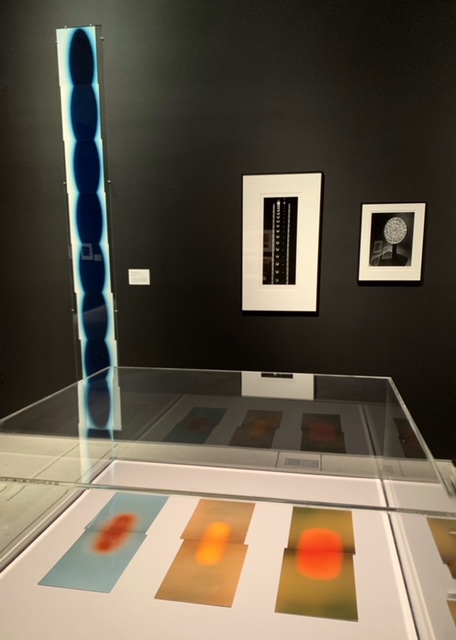 Her World in Focus exhibition, with Penelope Umbrico’s work in the foreground and black and white images from Berenice Abbott behind.

TMA created a small exhibition of works focusing on women artists – Her World in Focus: Women Photographers from the Permanent Collection. In a single gallery, 37 photographs by 13 artists are presented. These works were created in the latter half of the 20th century and represent a wide swath of photographic mediums and interests. There are some wonderfully creative and thought-provoking images.

Perhaps my favorites are chromogenic prints by Penelope Umbrico (Canadian-American, b. 1957). Umbrico addresses her domestic surroundings by photographing the ends of objects in her house. These she has made into glowing abstractions. Like the dreams of an everyday housewife, she has taken the mundane and turned it into rich, colorful beauty.

Her work is usually formed from found images pulled from the internet and the like, so this work seems particularly personal – perhaps an allegory on the difficulties of being a woman in a society where domesticity is not always valued.

Also working with her domestic surroundings is Jan Groover (American, 1943-2012). Displayed are two untitled still lifes, one from her series The Kitchen, 1978, the other from the portfolio The Indomitable Spirit, 1989. The series name alone gives you a clue into her themes of transforming the commonplace into the sublime.

Groover started her career as a painter and you can see this influence in her carefully constructed assemblages that reference art history. Everyday items like forks, plants and tchotchkes are carefully arranged to create formal tableaux. 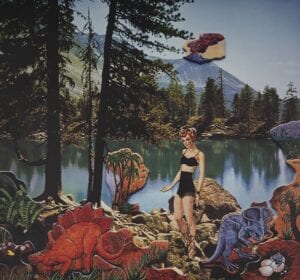 Suzanne Camp Crosby (American, 1948-2020) is also known for creating staged photographs, and the three works in this exhibition provide a good overview of her playful and creative inventiveness. Three dye construction prints illustrate how skilled Camp Crosby was at not just composing a compelling scene, but in conquering the difficult skill of this three process hands-on printing technique. Reality and construct play off one another.

Camp Crosby died recently of cancer. Her influence on Bay area photography is profound after teaching generations of students over the 38 years she taught at Hillsborough Community College. Her archives have recently been gifted to the Florida Museum of Photographic Arts (FMoPA), which will be cataloging, digitizing and distributing the works. [Disclosure: I work at FMoPA and will be involved in this endeavor.] An exhibition is planned for the summer of 2022.

Allowing light to enter through a tiny hole to hit a sensitized medium with no way of focusing often creates a blurred image – in this case almost to abstraction. This print offers a nightmarish version of the family story. Ess was a “No Wave” musician in Manhattan’s downtown punk scene in the 1980s and ‘90s, and this work compellingly reflects that sensibility. 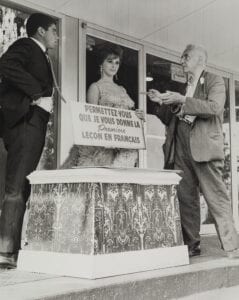 The remaining photographs are thematically all over the place. Topics include the exploration of masculinity by Maria Friberg (Swedish, b. 1966); landscape by Sally Gall (American, b. 1956); computer image assemblage by Maggie Taylor (American, b. 1961); nude collages by Deborah Beblo (American, b. 1955); and a comparative historical portrait by Nancy Webber (American, b. 1945).

There are examples of photographers exploring topics they are not particularly associated with. Dianora Niccolini (Italian-American, b. 1936) began taking provocative photographs of nude males years before Robert Mapplethorpe, but here is represented by snapshots of her friend Weegee (American, 1899-1968) trying to pick up a pretty woman in Greenwich Village. That is, until the boyfriend interferes.

Berenice Abbott (American, 1898-1991) is best known for her iconic photographs of the architecture of New York City, but this exhibition presents three works exploring her interest in nature and science.

The artist most represented in numbers of works is Maria Martinez-Cañas (Cuban, b. 1960). Seven of a group of 15 photographs are included from her series Quince Sellos Cubanos (Fifteen Cuban Stamps), 1991-1992. The series is inspired by a stamp collection that the artist’s sister had given to her. She reinterprets these stamps into wonderfully inventive graphic creations. The actual stamps that offered inspiration are also on view, which makes the process of exploring the images even more fun. 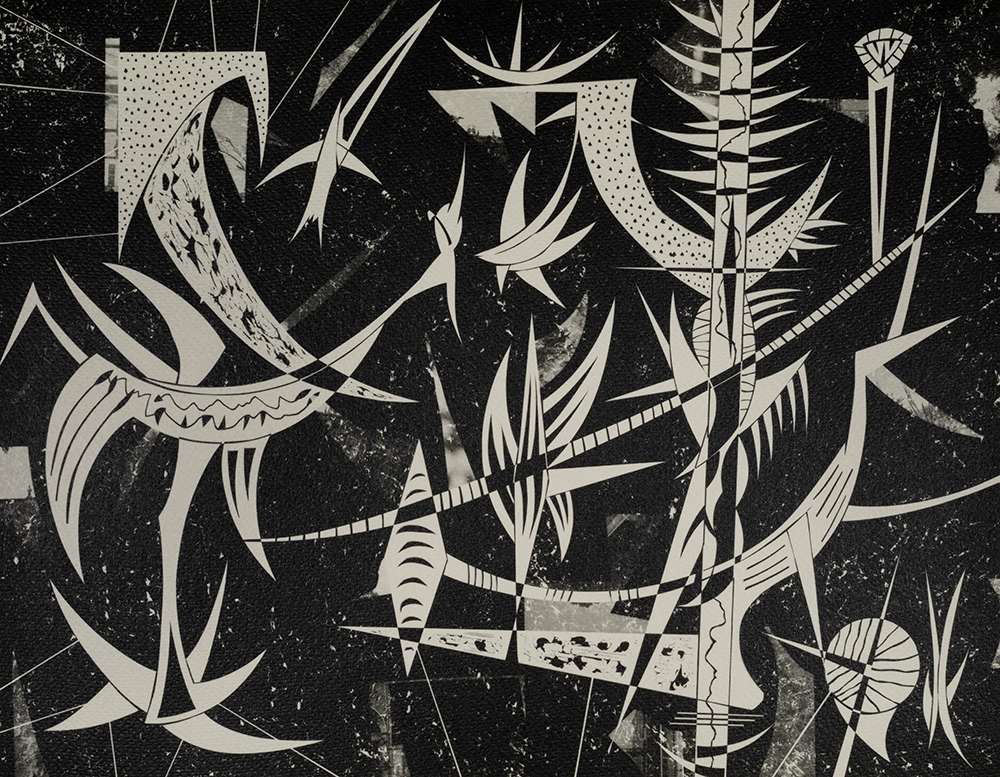 . . .
And no exhibition on female photographers would be complete without Cindy Sherman (American, b. 1954), one of the most celebrated and successful artists of our time. The print offered is an untitled photograph from The Indomitable Spirit, 1979-1989. This followed her seminal Film Stills series of 1977-1980. 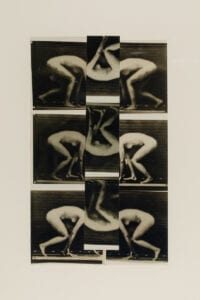 In the earlier black and white works, she photographed herself posed in staged settings reminiscent of film stills as a comment on female stereotypes. This photograph, while color, seems to follow that earlier theme, but The Indomitable Spirit: Photographers + Friends Against AIDS was a 1989 group exhibition at the International Center of Photography, New York exploring photographers and artists responding in the time of AIDS.

Staged outdoors, Sherman appears in a white wig, smoking a cigarette while she paints her toenails bright red. Her eyes are engaged in a sideways glance of apprehension, as though afraid of an unseen force sneaking up on her. Perhaps an allegory for the horrendous HIV virus that snaked its way through an unknowing population for years.

My one regret about this exhibition is that I wish they would have titled it, Her World in Focus: Photographers from the Permanent Collection, leaving off the descriptor “Women.” As Patti Smith famously said, “Nobody says, ‘Picasso, the male artist.’”

I know, I am perhaps being a bit sensitive, but I look forward to the time when we will no longer feel the need to make up for the decades, okay centuries, of undervaluing female artists. This exhibition shows the range and skills of a wide swath of artists coming from various backgrounds and origins. It is worth the visit.

Also be sure to check out Her Story: Stories of Ancient Heroines & Everyday Women. This exhibition has wonderful stories to tell.

It gathers art from across mediums – jewelry, pottery, sculpture and photography – to explore the roles played by women in ancient history and mythology. The artwork is by men and women, and it does a wonderful job of celebrating the idea of strong and courageous females throughout history.