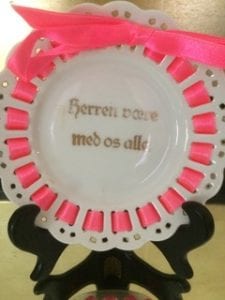 In my recent feature, “Feeling Isolated? With Books You Can Be Surrounded by People Again (Although Some of Them May Be Zombies)” — I mentioned in passing the story of my grandmother’s experience during the Pandemic of 1918.

I was recommending books — scary titles that I thought might make us realize that others had gone through worse — when I remembered the story my mother had told me about that flu epidemic (which was called “Spanish” then, although it didn’t start in Spain at all).

The story involved a ceramic plate she had in her china cabinet. I remember her telling me that when she was five years old, her mother — my Swedish grandmother — had gone into the house of her Danish neighbors when they fell ill with the deadly flu, bringing them soup and caring for them. The Danish family had credited her with saving their lives and gave her the plate as a gesture of thanks.

I got a lot of comments about that touching story and requests to see the ceramic plate (which is now in my own china cabinet).

Well, as it turns out, I had remembered only half of the story (a reminder that memory can’t be entirely trusted). When I sent my niece Sonja the piece, something jarred her own memory about that story and she found my mother’s version of it in her copy of Post Scripts: A Writing Life After 80. I was the one who had put together Post Scripts, a compilation of all the columns my mother had written for the St. Petersburg Times, so I was flabbergasted that I hadn’t remembered my mother had written down the story about the 1918 epidemic.

Under the headline “Good Neighbors, Good Memories,” my mother told the story as a “good neighbor tale” — not as a horrific tale of a deadly pandemic, which may account for why it didn’t register with me.

But when I re-read the column, I realized how much she had included about that time that must have been terrifying for a five-year-old. Hospitals that were no longer able to care for patients. Medical personnel in short supply. Churches and schools closed. Children ordered off the streets.

She also filled in the other half of the story that had dropped totally from my memory (perhaps because it was too terrifying for me to contemplate?). After my grandmother’s kindness toward her Danish neighbors, my grandmother herself had fallen ill with the deadly flu and the Danish family had returned the favor and nursed her back to health. 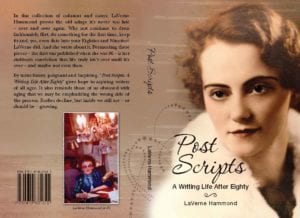 My mother wrote this column nearly two decades ago about an event that occurred 102 years ago. Now, of course, the details she provided have an eerily familiar ring.

Why wasn’t I more shocked by my mother’s story? Why did I only remember the part about the neighbors being sick? Because it happened so long ago? Because I didn’t want to imagine that my grandmother could have been one of the 50 million people worldwide who had died of the “Spanish” flu? Because I couldn’t imagine such a pandemic could ever happen again?

Funny how a few weeks of quarantine can change your perspective. Now, I relate to my mother’s tale of “two strong women” helping each other out during a pandemic in a totally different way.

Now I look at that ceramic plate in my china cabinet with a far more grateful heart. Now I understand that what the Danish saying on that plate — Herren voere med os alle  (The Lord be with us all) — really means is this: “We’re all in this together.”

We hear a lot these days about neighbors feuding — over fences, pets and lawn ornaments — but what about the good things neighbors do?

Too often those good deeds are forgotten, then something comes along to jog our memory. Maybe, as in my case, that something is a porcelain plate.

The plate with fluting around the edge and laced with a red satin ribbon once stood in my mother’s china cabinet. I had always thought it came from my grandmother because of the Swedish inscription on it: Gud voere med os alle (God Be With Us All). I later learned that the inscription was Danish, not Swedish.

My mother told me the story of her neighbor Greta Jenson, who had brought the plate from Denmark and had given it to her as a farewell gift.

The year was 1918. It was the beginning of the influenza epidemic and by that autumn it had spread worldwide. The peaceful rhythm of our town was about to be greatly altered.

The hospitals were filled, beds and medical personnel were in short supply because of the war, and most influenza victims were being cared for in their homes. 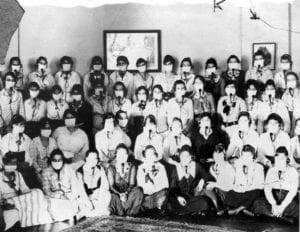 Women of the community were asked to help at the hospitals or in neighborhood homes. My mother helped by cooking soup and baking bread for the stricken households.

Eric Jensen and I played in our back yard because all children were ordered off the streets. My brother, George, who was 17 months older than I, was in first grade, but when churches and schools were ordered closed, he sometimes joined us in the back yard.

Mr. Jensen was among the first in our neighborhood to become ill. My mother helped Mrs. Jensen and her husband during the illness; he survived.

Then, even though my mother was strong, she came down with the disease.

My father stayed home from work to care for her, but Mrs. Jensen took over. She burned something in a copper urn to help my mother breathe more easily. When she left, she took her paraphernalia home but always left some smoldering in a small container near my mother’s bed.

Mrs. Jensen also made soup for us. It was spicy, and she told us to eat it because it would kill the germs. My brother was convinced that the spiciness of her soup would kill anything.

Mrs. Jensen mopped our floors daily and wiped the counters and all the doorknobs with a disinfectant. Our house smelled like a hospital corridor.

My mother recovered. Our family always thought it was Mrs. Jensen’s magic potion that did the trick. My father was so grateful for her help during my mother’s illness that he arranged for Mr. Jensen to get a job at the auto plant.

When we moved out of the neighborhood, Mrs. Jensen gave my mother the porcelain dish.

Later Mr. Jensen developed tuberculosis and had to leave his job. He spent several months at the Willowbrook Sanitarium in Kenosha, Wis., where he died. Mrs. Jensen and Eric returned to Denmark to live with her parents.

The porcelain plate now sits on an easel in my curio cabinet. The frayed red ribbon has been replaced by a pink one. It is a gentle reminder of the friendship between two strong women. With their generous and giving hearts, they both earned the title of “good neighbor.’’