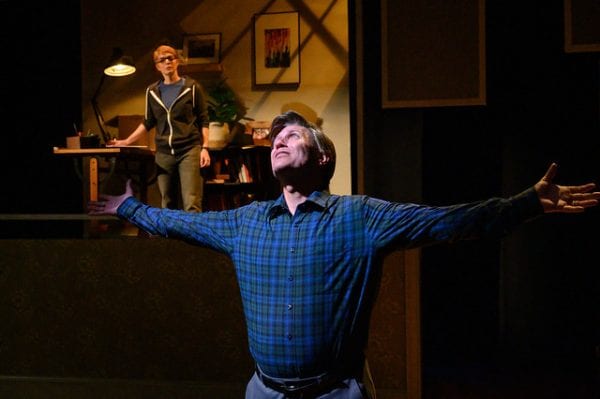 Fun Home Is Where the Heart Is

In the 1980s-’90s, the personal and public act of coming out picked up steam as a rite of passage, but parents were much slower to warm up to the concept.

Fun Home memoirist/illustrator Alison Bechdel grew up during this pivotal era. One of many to brave the precipice of the generation gap, she disclosed she was a lesbian to her parents while attending Oberlin College, and the news shook her household and just about knocked the hinges loose from the closet that hid her father’s true identity.

The aftermath was brutal, and her 2006 graphic memoir provided a therapeutic release. For the rest of us, it’s a compelling, historic work of contemporary literature.

Some thoughts from the director

“I came out in the ‘90s,” shares Karla Hartley, director of American Stage’s production of Fun Home and Producing Artistic Director for Stageworks Theatre in the Channel District.

“My parents were very good about it actually, They struggled because of their connection to religion but ultimately knew that I was their daughter and they love me.”

At the same time, there were plenty of loved ones who had it much tougher, Hartley added. There were friends who didn’t come out at all.

“Mostly it was silence. Introducing your partner as your ‘friend.’ No acknowledgement is worse than a terrible one sometimes. People felt unseen and unworthy.”

Hartley has certainly paid forward that love and acceptance as a director, production manager, performer and more. She, like her Stageworks predecessor Anna Brennen, has gravitated to work that’s socially conscious, promotes diversity and makes a courageous statement about injustices and inequality.

Some thoughts on the production

The Tony-winning musical with words and tunes from Lisa Kron and Jeanine Tesori, the first female writing team to win the prestigious award, mirrors the book, flashing back to Bechdel’s discovery of her own sexuality, her close and oftentimes troubled relationship with her father. Lyrics like “We arrange and realign / Everything is balanced and serene / like chaos never happens if it’s never seen” convey Kron’s poetic grasp of Bechdel’s prose. 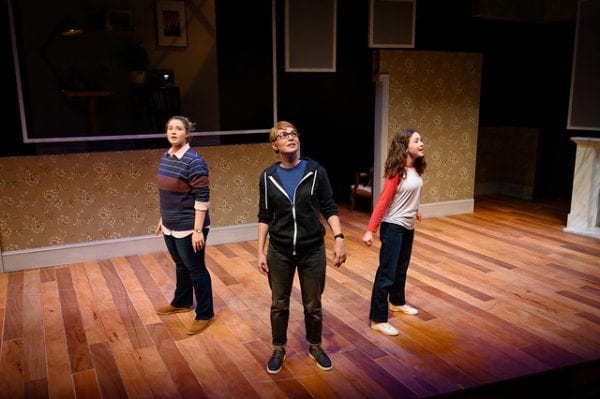 In the play, the protagonist/writer Alison Bechdel (Adrianne Hick) sits at her drawing table from above, in the present, from an elevated platform in the background. She picks up objects and photographs to remember her family life, depicted below. She sits above and sometimes beside – like a ghost of future past – the actors playing her younger self as a tween (Mercy Roberts) and college-age (Mollie Posnik). All three exhibit range and power in their portrayals and vocals.

For a good chunk of the play, Fun Home takes us back to the 1970s musically and visually with flashbacks of Al as a tomboy-type wearing tube socks up to her knees, coming under the derision of her doting father, Bruce (the always amazing David Mann), who tries to mold her into the type of high-society literatus profiled in The New Yorker or Vanity Fair. Alison isn’t on his elitist trip and forces him to  accept her choice not to wear dresses. The military man and intellectual purist resents that she’d rather be drawing comics than painting still lifes.

Al’s mom (Kristin Carbone) delivers the most dynamic portrayal I’ve ever seen of a wife enduring life as a placeholder, especially in the searing “Days and Days.” Brinley Degwert and and Tanner Grant show promise as the young Bechdel brothers. Skylar Rosenthal, a former UT student of Hartley’s, is amusingly low-key as Alison’s first girlfriend, Joan. Xavier Reyes elicits mixed emotions as various Bruce boy toys. All the actors are making their American Stage debut.

All of the performers command the stage, harmonizing and belting out mightily. There’s even a fun number of the Bechdels mocking a famous late 1960s/early ’70s TV family (no spoilers!).

Dad commands the kids à la the Von Trapps in Sound of Music to maintain an immaculate picture-perfect historic funeral home, hence the abbreviated title, but his efforts have dramatic irony written all over them. His attachment to the past and maintaining appearances become revealed as desperate attempts to conceal the inner turmoil, confusing desires and shame of a closeted homosexual, manifest in self-destructive behaviors that lead to his undoing.

A hearty shout out to sound designer Stephen Kraack for making us feel like a Mack truck is about to hit us, and lighting designer Mike Wood for his luminous effects, transforming day to night and past to present. 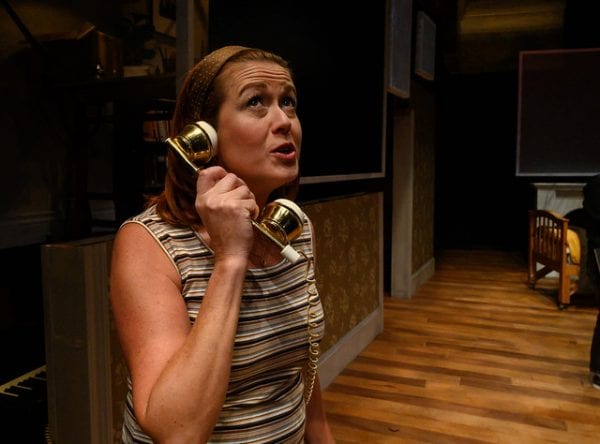 The exceptional Kristin Carbone (Helen) brilliantly conveys the trauma of being married to a closeted gay man.

Over the course of the play (one act, no intermission) we witness Al growing up and attending college, where she encounters a cultural club that inspires her to come out. Contrasting her experience, we see the world of her father and mother implode as she blossoms outside the lovingly nicknamed “fun home.”

Not only does Fun Home reveal the effect of accelerating societal change on a family, but it brings us into a home with all the joys, disappointments and conflicts we’ve all felt around our family.

Hartley shared that American Stage Producing Artistic Director Stephanie Gularte had chosen the play for the “Life. Out Loud.”-themed season and hand-picked her to direct it.

“We both connected with the play’s theme and felt that addressing the painful process of coming out,” Harley said.

Through dynamic and inventive staging and authentic portrayals, the award-winning director and the cast take us through the confusion, highs and lows of family life with exhilaration and poignance.

After the curtain, the audience sprung up in a standing ovation, shedding tears of both laughter and sadness. So much so, playgoers were shyly casting their glances downward, wiping their eyes and breaking their silence with words like “amazing”  and “breathtaking” as they filed out of the theater. I was among them, as entertained as I was moved by this outstanding American Stage production. I came away feeling like I was emotionally tethered to the Bechdel family, if just fleetingly.