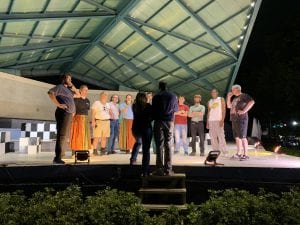 It’s events like these that reanimate downtown St. Pete’s Williams Park ever since it emptied out after removing the bus depot.

“You can talk about reclaiming a space, or you can do it,” says Bob Devin Jones. “The Community Foundation gave a significant sponsorship so we can pay the actors and staff. The community can partake for free.”

If you went to last year’s production of A Midsummer Night’s Dream, co-directed by Bob Devin Jones of The Studio@620 and Veronica Leone Matthews of the St. Petersburg Shakespeare Festival, you may remember they had sound issues early on with harsh crackling and blocks of silence.

“We made adjustments after opening last year which improved the sound,” Matthews explains. “We continue to strive for better sound, but performing outdoors is always a challenge! Since our performances are free for the public — but far from free for us to produce — we appreciate the support to afford better sound. Interested readers can donate.” 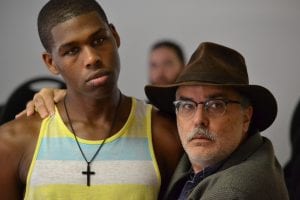 Jones has heard people say they used to go around Williams Park, now they come through the park. Some have never been there after dusk, he says, but it’s a beautiful, safe urban setting with all the lights from the buildings around, making it easy to enjoy The Taming of the Shrew.

“There’s also ambulances,” actor Amadeus Dameron adds. “One night there was a police helicopter flying overhead. There’s sound issues and we’re dealing with that. It’s a challenge and it makes you better and more aware as an actor and as a person practicing patience.”

While the script is rough on women, Matthews explains that the play was chosen because “as long as we live in a society where men are in control and exercise that power by abusing women — as well as other men and people of any gender or orientation — this play will be relevant.” 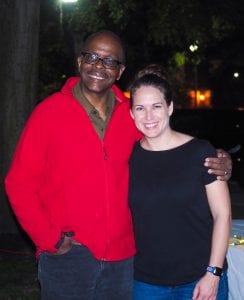 An all-male cast brings to life a 400-year-old story about a brash and “unloveable” woman who falls for a violent, abusive man as he strategically woos her. Through a series of events, she goes from outspoken to doormat, and thus he tames the shrew.

“Like Shakespeare, I wouldn’t personally want to see a woman referred to as chattel for two hours,” Jones says. “So it’s a great piece of literature, it’s of its time, but this is our take on it.”

Dameron plays a woman, Kate, and he says the role taught him about the “horrifying” path laid out for women in centuries past.

“It provides a nice backdrop for the political issues we have going on today,” he explains. “We’re taking old mythological tropes and putting them under the spotlight of today’s cultural lens, and it’s interesting to see all the landmines in this terrain, the terrain of the script.”

Dameron thinks he was given the part without auditioning because of his reputation for being a sharp-tongued loudmouth, with is Kate’s core issue in the play.

“She is someone who sees how backward and bullshit her situation is, and her reputation in the play is being too sharp-tongued and whatever the opposite of gentle is, ill-tempered,” he says. “I see Kate as looking to be accepted as someone who can be honest about how inextricable the situation is — the problem of wanting to be a genuine human being but society being so tense that she is becoming a pariah for trying to be an individual. She reminds me a little of Arya Stark from ‘Game of Thrones.’” 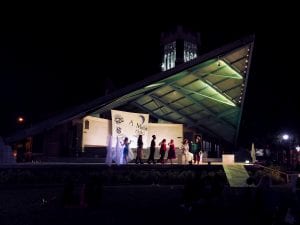 Opening night for 2018’s A Midsummer Night’s Dream. Photo by Our Photo Tribe.

Jones connects with the idea of making people feel deep things that ultimately benefits society, if only in little pockets of an evening. We need these moments of levity, storytelling. He lights up describing the special bond that can form between two people.

“At some point, you’re going to want to occur with another human being,” Jones says, “and you want your journey witnessed and so there’s a moment where Kate and Petruchio go — in this play at some point Kate and Petruchio go — I got you. I got you. That’s the celebration, we’re ending with ‘Crazy Little Thing Called Love.’ And that’s right, cause love IS crazy. It’s crazy.”

The play opens up singing the Queen lyrics “Find / me / somebody to loooove…” and the style reminds Jones of another song.

He asks me to put on “Sky Blue and Black” by Jackson Browne. We’re sitting in a coffee shop. I blast it anyway. He sings along with his eyes closed and head down. He says he listened to this song 50 times on a drive through Georgia to Jacksonville, to catch a plane to win an award. He brings his hand up to his face and may have started crying.

“Bob, are you tearing up?” I ask, continuing to type.

And he keeps singing.