By Carol Mickett and Robert Stackhouse

Too often we take foundations for granted.  Oh, not again.  Can’t I skip that.  I think of when I was taking singing lessons and I had to do all those warm-up exercises with vowels and scales.  I just wanted to sing the song!

It was my good fortune to have a good teacher: Molly Jessup. She was the renowned musical director in Kansas City, MO, of the plethora of theaters and at its campus of the University of Missouri’s Theater Department.  She taught me well that those warm-up exercises were invaluable to a good voice.  Even to mine, which would never be great, but good enough if I had to do a line or two of singing in a theatrical production or while giving a talk or even around the house.  I still have all my recorded practice tapes somewhere in the archive boxes.

So, when Robert and I were starting to do some paintings on canvas, I asked him to give me his gesso talk.  Afterall, he ran the BFA program at the Corcoran College of Art in Washington, D.C., for umpteen years and has a master’s degree in painting.  It may seem odd that I wanted to hear about gesso, but many may not realize that we rarely paint on canvas.  Our paintings typically are on heavy watercolor paper that is mounted on canvas.  No gesso required.  But, now, at my urging, we are going to do some paintings directly on canvas.  Hence, the gesso talk. 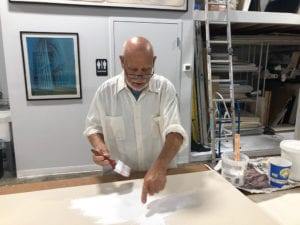 Robert instructing and demonstrating how to apply gesso

Robert has always said that Barnett Newman maintained (or was it Phillip Guston or Agnes Martin or . . .) that gesso is the most important part of a painting.  I knew this had to be true, since the gesso is the foundation.  It is that which allows a painting to be strong, to not move, and to be preserved.  Doesn’t sound much different from the foundation of a house.

We thinned the gesso to make sure that it would seep into the canvas rather than to have it just sit on top.  Our gesso is made for painting with acrylic paint and is designed to seep into the canvas and bind it.  But just like the singing exercises, once is not enough.  The gesso is applied in layers.

A finished, well-gessoed canvas works in tandem with your brush.  It will pull the paint off the brush as it moves across the canvas.  The brush activity directs how the paint is distributed.  Of course, the artist does play a role in all of this.  With a good foundation, she will be well on her way. 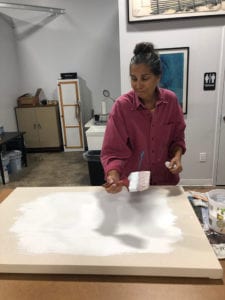