On View at The James Museum

Environmental Impact was an art exhibition that traveled to 10 venues between 2013-2016. Curator David Wagner has followed that first act with Environmental Impact II at The James Museum in downtown St. Petersburg. The exhibit will travel to seven other museums across the country over the next two years.

Environment is defined as the conditions and influences that affect the development, life and survival of all organisms in a particular place. In Environmental Impact II, that place is planet Earth and the prime influencers are humans. 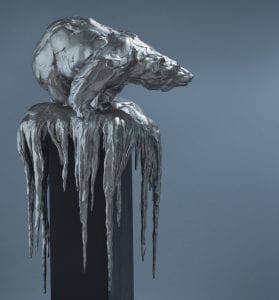 Cole Johnson’s Power To The People pictures a red-tail hawk dangling from power lines, dead. The irony, such a wonderfully executed graphite drawing, depicting such an undignified end.

In similar sadness are two beautifully carved sculptures by Leo Osborne of shore birds – a big footprint stomped next to a plover, and black caulk simulating an oil spill polluting the habitat of sea birds.

What if there are no trees?

Suze Woolf’s State of the Forest installation is a walk in the forest. Poetically. Translucent fabric, cut into tree shapes, suspended, creating its own island in the gallery. Each tree, created from several layers of translucency, gives a dimension, both physical and historical to its life. Together they tell of natural cycles, which include regenerative forest fires – and show that humans lack understanding of the process, enabling more destructive fires.

Robert Bateman’s acrylic on canvas painting, Carmanah Contrasts, bisected horizontally with the top image of a verdant old growth forest on Vancouver Island, and the larger bottom half of the painting depicting the same forest after clear-cutting.

Bateman’s painting was completed in 1989, while Woolf’s installation was created this year. If only they were isolated events in this span of 30 years, but they are part of ongoing wanton destructions happening even now, as news tells of deliberate fires set in the Amazon rain forests, the lungs of the planet. Any lessons learnt? 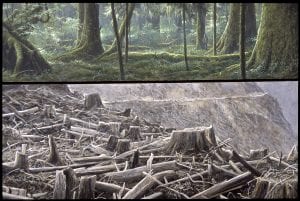 There are 21 artists in the exhibition. Walter W. Ferguson died in 2015. Three of his delicate paintings are included, part of his artistic legacy. One shows a young child playing at the beach. Strewn in the sands behind her are a wide range of trash. The legacy of unconscious living.

From the very first piece on the title wall that welcomes visitors, an oil on canvas painting titled, Have an Ice Day by Karen Hackenberg, the message of the exhibition is quite clear. Smack dab in the middle of a nice blue seascape flies a large plastic bag from one of those ubiquitous ice vending machines.

In literal depictions, in metaphorical imageries, in poetic statements, each artist directly confronts how we have occupied this Earth.

Breathing in, breathing out. That is our inspiration and expiration. From the first breath to the very last, we should all live and die with dignity. 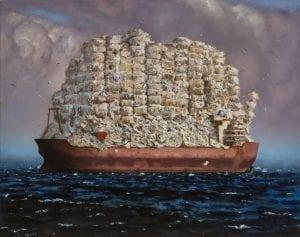 There have been many environmentally-based exhibitions world-wide. Some are more political, some more focused on specific ecological issues.

Environmental Impact II provides an overall view, a general sounding of what is happening on land, sea and air.

By hosting this exhibition, The James Museum has done a challenging thing. The focus of the Museum collection is Western and wildlife art. Environmental Impact II provides interesting counterpoints to the wildlife art in the galleries.

Much of that art depict animals, birds and aquatic life in more or less ideal, pristine settings. Then around the corner, in Environmental Impact II, are equally well-executed art works – but marine life is defaced by splotches of an oil spill. Or in an environment that is dark and foreboding, the artist actually used tar in the painting.

In the show’s iconic piece installed near the museum entrance, Sayaka Kajita Ganz’s blue whale Nanami is made of discarded plastics. A beautiful piece. Perhaps she has made it too seductive to convey the danger that plastic is insidiously invading every landscape.

Idealized, there might once have been a paradise we imagined and long for, a biblical Garden of Eden of sorts. In reality, is this incredible planet where we all exist and have deep connections, and potentially a very profound future.

Some of the creatures depicted in both galleries are on the endangered species list, while humans continue sawing through the very branch on which we all sit.

Find out more at thejamesmuseum.org