Echo Quilt is Made of Stories 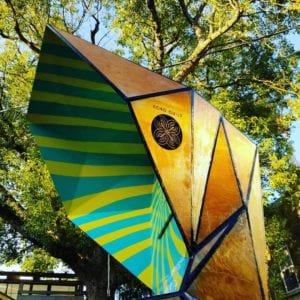 You can obey the “Safer at Home” and curfew orders while still enjoying the local ongoing art project The Echo Quilt — a creation of LiveWork Studios.

Debuting at the Sulphur Springs’ nonprofit Community Stepping Stones, the piece is an interactive mobile sculpture that has a working phone system for people to listen to or tell stories — or both — of the Springs and other parts of Tampa. Though the actual sculpture can’t be enjoyed up close right now, people are encouraged to call the Echo Quilt and explore its offerings.

The Arts Coast Journal talked to LiveWork’s Devon Brady — who co-founded the cooperative with Janine Awai and Mike Lemieux — about the project and how art is helping him get through the quarantine. We also got an update on the highly anticipated immersive Florida art celebration Crab Devil — a project they are collaborating on with other key members of the Tampa art scene.

How did the idea of the Echo Quilt come about?

Echo Quilt was kind of a synthesis of several project ideas that we had been batting around for awhile. We were initially thinking of producing art installations that could occupy space without having much of an actual physical presence — kind of a way to tie spaces together through art.

We started thinking of placing radio transmitters in places around the city that would broadcast audio to listeners and link the spaces together, but we eventually became just as interested in what the content of that audio would be and how we could make it user-generated.

In 2010, outside the Japanese town of Otsuchi, resident Itaru Sasaki constructed a phone booth with a disconnected rotary phone that he used to meditate and make “phone calls” to a deceased relative. After the tsunami in 2011, this became a spot where thousands of Japanese would come to mourn and speak with their lost loved ones. We were struck by the way in which the intimacy of a phone booth could allow people to express their stories and emotions. 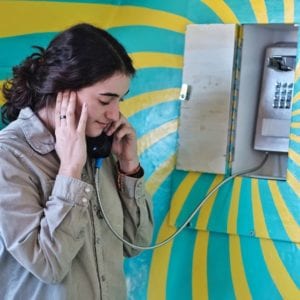 We were looking for a way to connect the residents of Tampa’s different neighborhoods through the power of storytelling and the intimacy of a single human voice. When Treasure Tampa issued a call for projects that would encourage “creative placemaking” in some of Tampa’s underserved communities, this seemed like a project well-suited for their mission.

When you have an idea, how do you turn that into something tangible?

These things usually go through several different iterations before becoming reality — if they do so at all. Much of what we do starts with a question of feasibility. We have an idea but we don’t really know how to make it work, or if it’s even possible at all.

Part of what we have been doing for the last 25 years or so is establishing a network of like-minded weirdos who are excited about taking on these kinds of projects. In this case, we assembled a group of collaborators made up of academics, community organizers and tech people to craft the initial grant proposal.

We explained the idea of a telephone-based system to our friends, brothers David and Daniel Dye, and they put together a working prototype of the system using Twilio, an open-source cloud-based system generally used by businesses for setting up phone tree systems. It uses the Amazon file sharing platform to store recorded audio.

We cobbled together a prototype of the technology using an analog push button telephone, a solar panel, an autodialer and a digital converter used to send the signal via Bluetooth through a standard cell phone. To our surprise, it actually worked.

How did you get involved with Community Stepping Stones?

LiveWork’s relationship with Stepping Stones started through the Music Box: Tampa Bay project, realized in March and April of 2016. USF Curator Sarah Howard brought in the New Orleans-based arts collective New Orleans Airlift to put on a traveling version of their ongoing Music Box project that started in New Orleans after Katrina.

The Airlift artists used reclaimed materials to assemble villages of “musical architecture” (structures that function as musical instruments) and then program a series of performances by a variety of artists in these magical spaces.

For the Tampa iteration, LiveWork and St. Pete artist Tory Tepp were brought in as the local collaborators. The project was set up on the Stepping Stones property in Mann Wagnon Park and we used the materials harvested from the demolition of old buildings on the site to provide materials for the project. We developed a strong working relationship with Stepping Stones at that time, and we had been looking for ways to incorporate them into other projects since then. 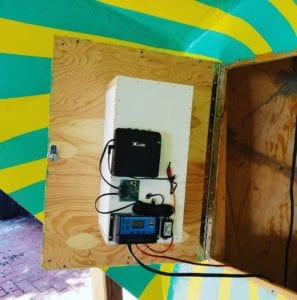 Behind the Echo Quilt – photo by Devon Brady

Was the interactive part of it always planned on being mobile?  Is there a date for the permanent piece?

The mobile unit started out as a proof of concept for the project and slowly grew to be something larger than that. Our initial intent was always to have a permanent installation of the project in Mann Wagnon Park, but we have encountered an ongoing series of hurdles in our attempts to make that a reality.

As of now, the project remains unfinished (as an ongoing project, it may never be “finished”) and we are retooling things a bit. We are working to make some more (smaller) mobile units and to continue to deploy the project to different parts of the city for everything from single-day events to months-long engagements.

Also, we have a fetish for bicycles. LiveWork co-owner Mike Lemieux likes to say that it’s not really a LiveWork project if there isn’t a bicycle attached to it somewhere.

How do people react to talking about themselves or telling stories? Does it come easy for most?

Honestly, we are still working on this one. In its initial conception, the piece would sit in a quiet park and people could approach it on their own time, in private, and have an intimate conversation over the phone.

In reality, most of what we have done to date is to take the mobile unit out in the neighborhood or to events where we are inevitably standing around, talking to people, and explaining how the project works. I think this has been an impediment to us getting people to really open up at times.

Part of what I have been doing lately is simply giving out the phone number that people can call to record stories from the privacy of their own homes.

Part of the difficulty of explaining the project to people is that it is meant to be a piece of art that can exist even without a physical presence. To me, the mobile unit and even the proposed permanent installation are just ways to draw people in and make them comfortable in sharing their stories. If it works out better to have them do that from the privacy of their own homes, then I’m fine with that. 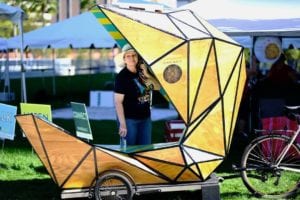 What are the most interesting stories you’ve heard people tell?

When we were set up in Curtis Hixon Park for the Gasparilla Festival of the Arts last year, we had a woman come by and record a story of her experience from shortly after September 11th in the Bank of America tower that overlooks the park where we were set up.

She was working in the tower on January 5th, 2002 when a local high school student, Charles Bishop, stole a Cessna and crashed it into the side of the building. She and her husband, who was also there working at the time, heard the impact and ran to the site of the collision where they tried, unsuccessfully, to rescue the pilot from the plane. I listened to the story the next morning with chills running up my spine and tears in my eyes. I’m getting choked up now just thinking about it.

This project has been a long time in the making and it’s come together in fits and starts, but when I heard that story, I knew that we were on the right track. If we can get people to open up in that way and share their stories with others, I think we can consider the project a success.

What kind of art, personally, gives you comfort in these times?

I’ve really been enjoying the social media postings lately. I love any kind of original content. I’ve always treated social media that way myself — it’s such a cheesy platform, but I view it as a challenge to craft things that are humorous or heartfelt or inspirational. It’s kind of like trying to write a poem on a Speak and Spell. 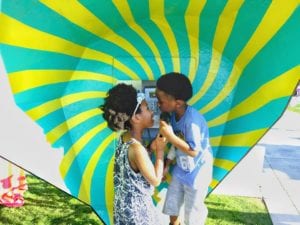 Lately, I’ve really been enjoying my musician friend’s contributions, live-stream performances and recorded songs. I’ve been doing some myself even though I’m not much of a solo performer. I can’t really play or carry a tune very well, but right now I don’t even think it’s about that. It’s more about putting yourself out there for the people that you love, and not being afraid to be vulnerable or flawed.

I love how our current situation has stripped off a lot of the bullshit and walls that people previously put up between themselves.  People are sharing some really intimate moments, and not really in a TMI sense, more just expressing their anxiety or fear or hopes for their fellow humans. It’s encouraging to see.

Personally, I’ve mostly been writing a lot because I feel like my voice is pretty strong right now, and it’s easy to do. I can do it from right here in this giant depression I’ve created at the end of the couch.

Another project LiveWork is creating is an immersive arts attraction
imagined as a family-friendly cabinet of curiosities ripe with kitsch, bizarre history
and fantastical lore showcasing Florida at its most weird and wild,
presented through the guise of a typical roadside establishment, the Crab Devil Bait Shop.
crabdevil.com

While I have you, how is Crab Devil coming along? Are you still moving forward as planned, as much as one can in a quarantine?

Crab Devil is moving along as much as can be expected. There is a ton of planning, permitting, legal wrangling and general administrative/organizational work to be performed on a project of this size, and most of that is still able to proceed.

We have finally assembled a full set of architectural and engineering documents that we need to proceed with the work on the site and as soon as we can settle on a contractor, we should be able to start making some physical progress on the building.

We have approved proposals from 8-10 artists at this point and they are starting a second round of revisions to their conceptual work so that we can fit things better into the project as a whole and then we will get them started actually building things.

We had planned a big rollout of the project to pitch to potential investors at the end of the month, but obviously that is having to be rescheduled. We are still strongly committed to moving it forward and we just hope that we are able to proceed once this current storm has passed.