Dancing with a Hurricane | Kenny Jensen 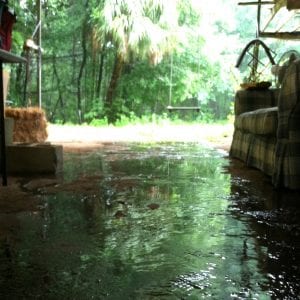 “My favorite place on the Earth is that land, at Gulf Hammock,” artist Kenny Jensen says in an achingly earnest way.

I immediately Googled “Gulf Hammock, FL” and dipped into the street view: there is little more than a single intersection home to blinking red lights, an abandoned gas station, a tiny post office and long curtains of trees. Jensen’s cabin, barn and art studio are nearby, surrounded on three sides by Florida swamp. Gulf Hammock seems like the kind of place that is far from anywhere that is not Gulf Hammock.

Jensen’s grandparents purchased the land in the late 1970s before retiring 20 years later and moving to St. Petersburg. Jensen moved from California to Florida and now owns the land with his wife Maggie. Often, he works in the open barn area that is free of most of its walls.

“It’s a really convenient studio space to do large projects,” he says. 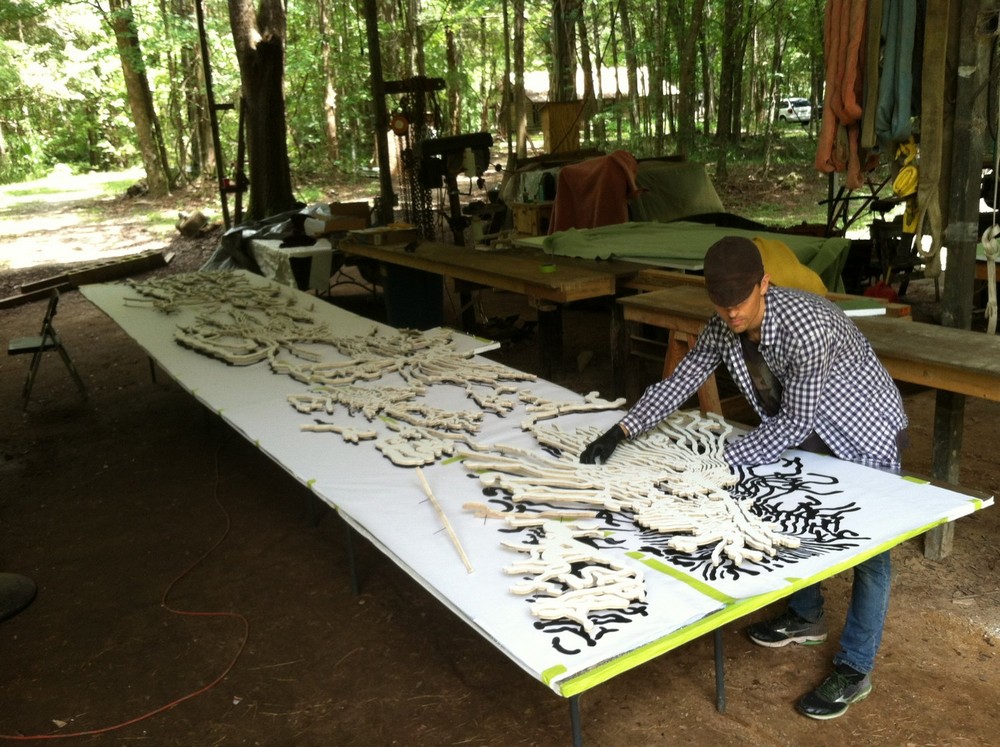 Kenny Jensen working in his Gulf Hammock studio. Image courtesy of the artist.

The open nature of the barn however, draws peculiar nighttime studio-mates.

“When there’s big lights, it tends to bring things,” Jensen says. “I usually have a couple barn owls follow me around each night.”

One post on his Impact Returns blog features photos of owls, wrens, various spiders, a water snake, an armadillo, a bullfrog and a beetle—all visitors in a single evening.

“There’s something wild about it that encourages me to be wild,” he says about his surroundings in Gulf Hammock. “For the curious there’s a lot to dive into.”

Ultimately, it’s this curiosity that appears to largely drive Jensen’s work. As much as it is an outward expression, his practice is also a diligent inward investigation.

Jensen subtly pulls back at times during our interview—not in an effort to maintain his privacy, but, I sense, to spare me having to follow him down a meandering and engrossing train of thought.

Jensen seems to revel in complexity. If a single person’s smallness in a holistic view bothers him, he doesn’t show it. Rather, his comfort with this idea is perhaps borne out in his Gulf Hammock studio space, a spot of shelter in acres of forest and swamp.

This existential smallness reaches a special clarity in Gulf Hammock and all of Florida in the shadow of an approaching hurricane. Stretching hundreds of miles and setting millions of people into mass movement to safer places, the scale of hurricane Irma was overwhelming.

“The hurricane was very traumatic in some ways,” he says.

Installed for the Creative Pinellas Emerging Artist Exhibition barely a month after the storm, the brightly-hued hurricane/galaxy swirled high on the wall. The Divine Dance soared over every other artwork in the exhibition, near the wall’s terminus, demanding viewers to crane their neck. 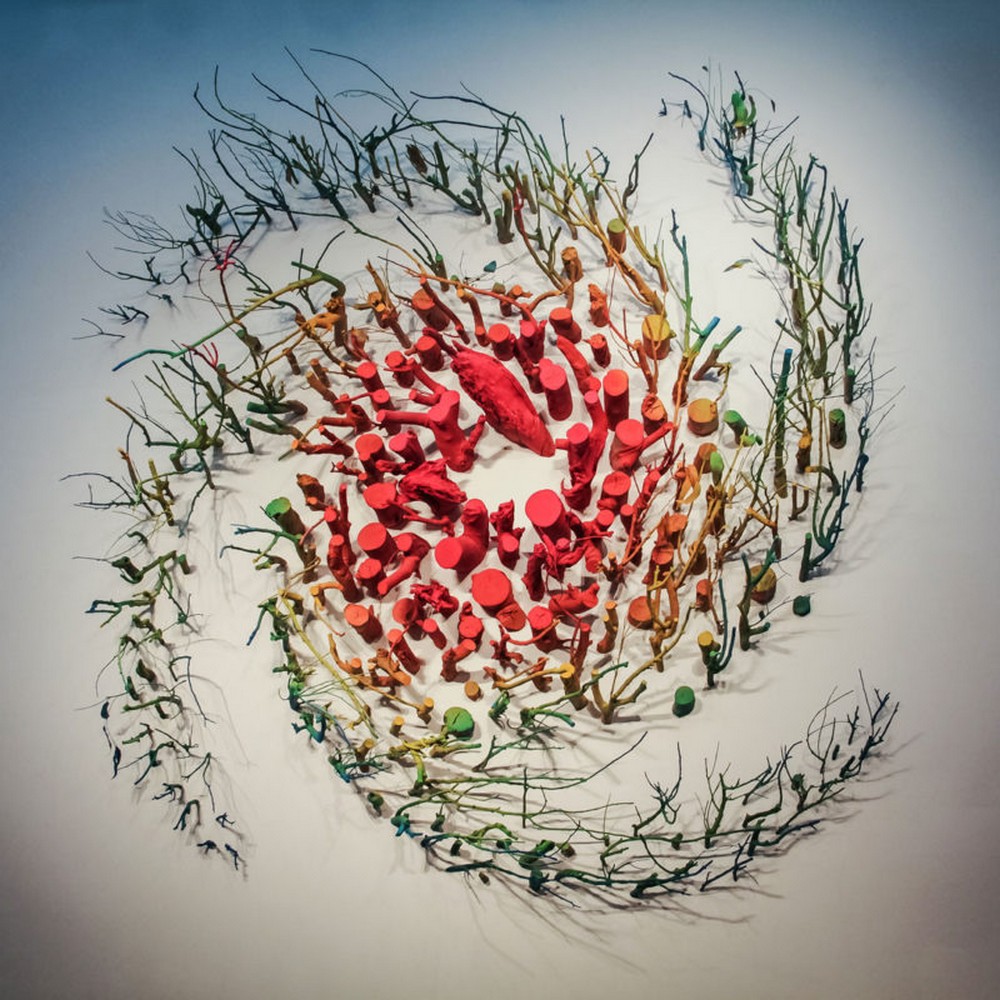 The Divine Dance is composed of limbs felled from a single tree by Irma, painted a doppler-radar gradient of blues to reds, and each driven directly into the gallery wall (not unlike debris through a boarded-up window). The origin of the sticks and branches and the violence of their installation lends a powerfully literal hair-of-the-dog-that-bit-you quality. Soothing in its own way, it’s a totem of the mess we were all cleaning up. It recalled the ubiquitous piles of debris that, at the time, seemed to clog every outside patch of unused ground.

Indeed, the Divine Dance is linked to Jensen’s own post-Irma cleanup. Jensen returned to his St. Petersburg home after evacuating with his wife and young child, Cedar, to survey the damage.

“We have a giant eucalyptus tree that looms over the house,” he relates. “We came back and several branches had snapped and if it wasn’t for the vines growing up the tree they would’ve landed directly on the house.” 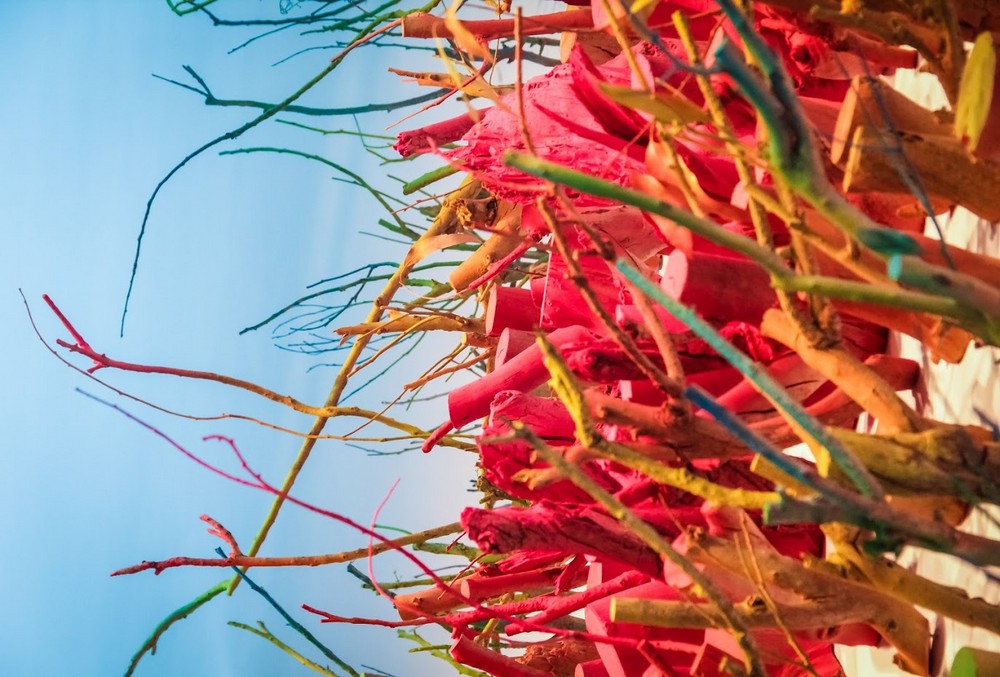 Limbs were held aloft in the embrace of the vines or dropped, diverted from his home. It was beginning to become clear that Jensen wasn’t exactly investigating a hurricane, but relationships holding fast (and perhaps some unraveling) through a storm.

Curiously, though, The Divine Danceis a mirror image of Irma—if the installation spun, it would spin clockwise. This allows the artwork to become more than a portrait of Irma.  It is as much a hurricane as a galaxy, at its heart a peaceful eye or an all-annihilating black hole.

“I’m using the piece to say something about the world and to investigate the world,” Jensen explains. “I think there’s a complexity to lean into.”

The divine dance of the title isn’t the heady and unknowable clockwork movements of the universe, or some such cliché therein. I believe Jensen is leaning into the storm, the catastrophe and natural event much deeper and personally than that.

I left our conversation about The Divine Dance, thinking of the circle dances of my Serbian-Romanian family. Compelled by an older relative and a yank on the arm, I’d be pulled in, holding a hand on my left and another on my right. Three steps to the right, two back, two left, three quickly to the right again and the circle of all of us slowly, steadily spins counter-clockwise, always counter-clockwise. Like Irma. The storm’s bands, its arms, gripped the State and larger region and we danced. 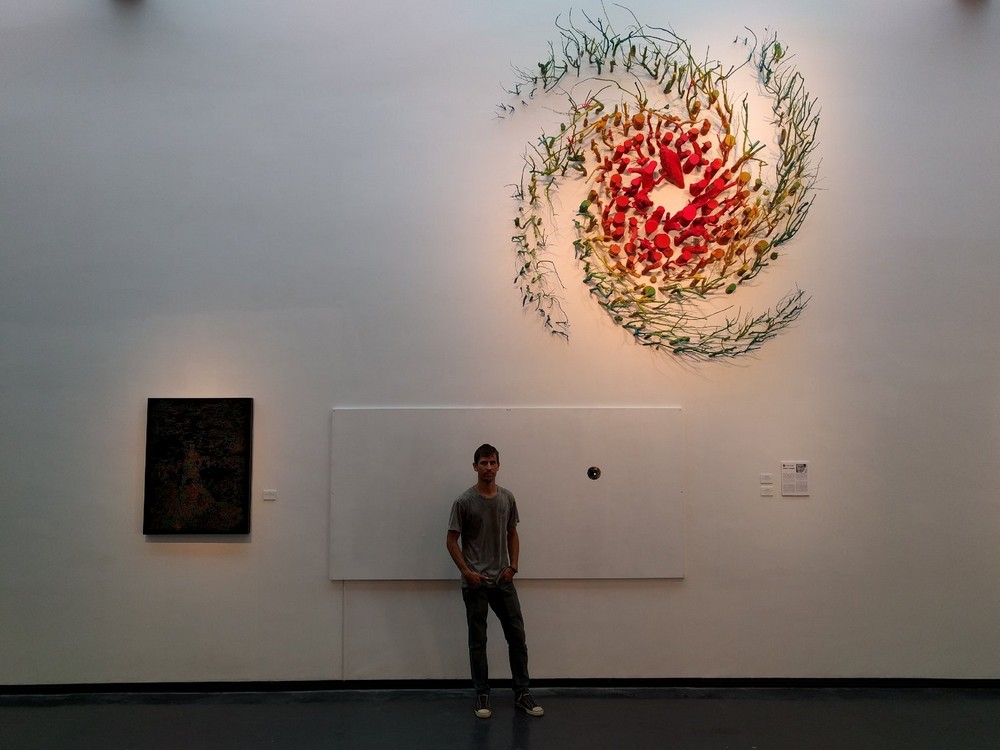