at the Dalí Museum

One thing you can count on from the work of Salvador Dalí – there’s always something for everyone.

Unlike many other artists, Dalí was not a one-trick pony. His talents were many and he often employed several simultaneously. His objective was not only to delight and entertain his audience but also to keep himself artistically engaged and creatively challenged. 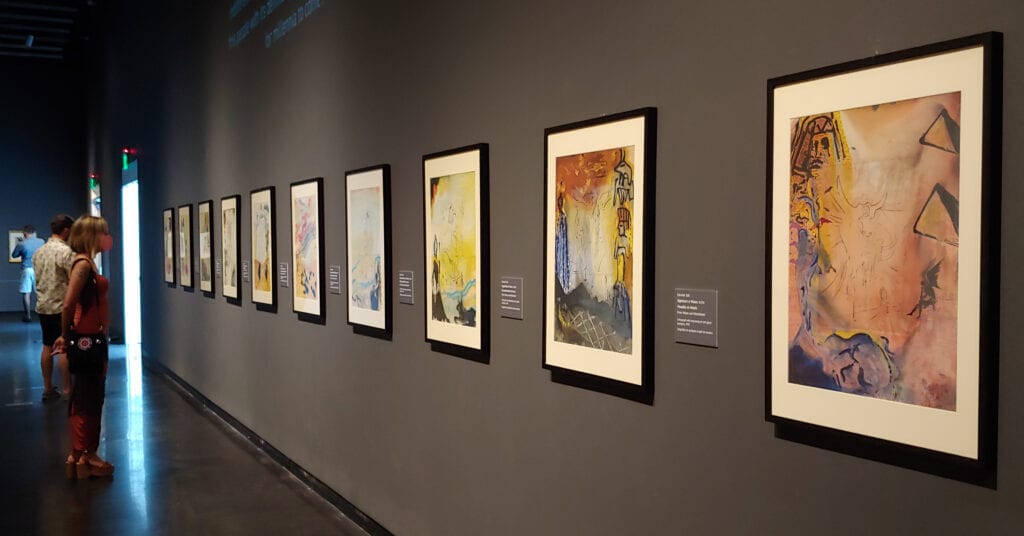 Dalí’s Sacred Science, the current exhibition drawn from the Dalí Museum’s own collection, effortlessly brings together many of his interests. The word “effortlessly” is apt because any one work by Dalí almost inevitably combines a variety of subjects and influences. To expect Dalí to focus on one topic at a time is like asking a child to choose a single piece of candy while waiting in the supermarket checkout line.

The exhibition is comprised of 54 prints selected from five suites that Dalí produced between the years 1957 and 1976, relatively late in his career.

The five suites are titled Don Quixote, Aliyah, Mythology, Alchemy of the Philosophers and Moses and Monotheism. Sound intimidating? Don’t worry. The museum provides many helpful wall texts providing the backstory of each suite.

The important thing is, even if you know little or nothing about any of these subjects you will be enthralled and delighted by the images. My suggestion is to approach this exhibition as if it were a treasure hunt. The more you look, the more riches you’ll discover.

For instance, each of the prints in the Alchemy series is embellished with two or more precious and semi-precious stones glued to the surface. Can you find them all? 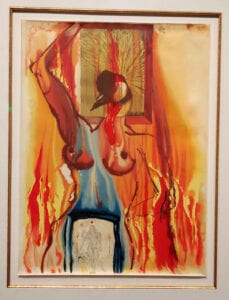 Dalí invented a painting technique he dubbed Bulletism whereby paint-filled bullets would be fired from an antique rifle at his painting creating splashes of color. Can you find evidence of this technique in some of these prints? 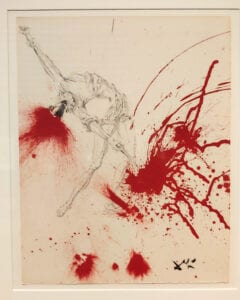 The Wine Casks (from Don Quixote)

Another technique Dalí often relied on is called decalcomania. Paint-covered objects are pressed onto a surface to create abstract (or nearly so) images that suggest recognizable subjects. Can you decipher when and where Dalí employed this? 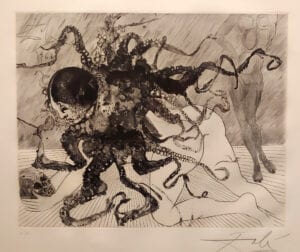 The Phoenix (from Alchemy and the Philosophers)

Similarly, Dalí would often begin a print by applying paint randomly as a starting point and then elaborating on it with drawn or painted embellishments. Evidence of this approach appears regularly throughout the exhibition. Can you spot examples? 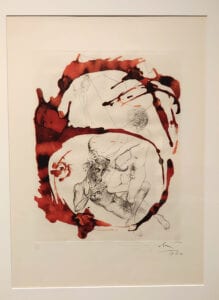 Theseus and the Minotaur (from Mythology)

And what summer exhibition in Florida would be complete without a vacation scene? Dalí turns the parting of the Red Sea into what could be a snapshot taken at any one of St Petersburg’s beaches.

We see a nude figure (hermaphrodite?) dreamily recumbent on golden sand seemingly holding a towel propped up by one of Dalí’s trademark crutches. Rainbow-colored waves lap at the shore indented with Dalí’s own handprints. Tiny figures frolic in the water and on the land next to what could be a semi-dissolved sand castle. 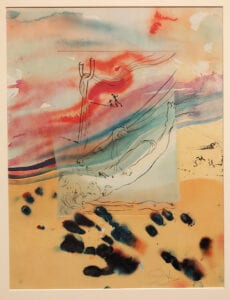 The Sea Parted by Jehovah (from Moses and Monotheism)

In case you’re wondering, Dalí is also capable of rendering images that simply are what they appear to be. In this instance, a menorah. 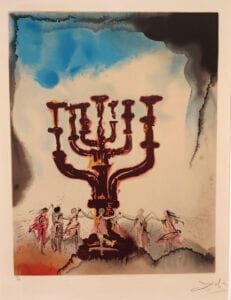 Finally, for all you print aficionados out there, try this. . .  Without looking at the wall labels, figure out which printing techniques were used in each print. Are you looking at an etching, aquatint, lithograph, serigraph, silkscreen or engraving? Used alone or in combination? And while you’re at it, see if you can guess what each series is printed on. You may be surprised!

You can explore the Dalí’s permanent collection online. . .