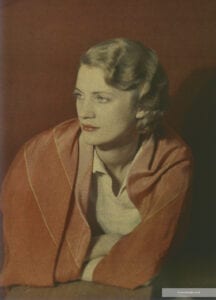 The life of photographer Lee Miller unfolded like the best of Hollywood films, full of adventure, romance, bravery, betrayal and extraordinary beauty.

A fashion model, photographer, war correspondent, writer and arbiter of haute cuisine, she was friends with many of the most important artists of the 20th century, including Man Ray, Max Ernst, Henry Moore, Dorothea Tanning, Joseph Cornell, Dora Maar, and Pablo Picasso.

If you have heard of Lee Miller, it may very well have been because of her association with the surrealist artist Man Ray. Like so many women artists, her name has often been eclipsed by the male company she kept, although many of those female artists are now being rediscovered.

Her son released a documentary, Lee Miller: Through the Mirror in 1995 and in 2017 the Hollywood Reporter wrote that Kate Winslet was slated to play Miller in an unnamed film that was to start shooting in 2018. The film Lee is now scheduled to begin filming next year.

Miller (1907-1977) was born in Poughkeepsie, New York into an upper middle-class family, with a father who was an avid amateur photographer. She grew up in front of his camera and watching him in the dark room. This comfort in front of the lens paid off when she literally fell into modeling. In 1926 she left home to study art in New York City. Stepping off a curb into traffic, a random man pulled her back from certain death. This man was none other than Condé Nast, owner of a magazine empire. She was soon being photographed by Edward Steichen and gracing the cover of Vogue.

When she arrived in Paris in 1929, she presented herself to the already famous Man Ray and declared she was his new assistant. He insisted he didn’t take students and that he was leaving on a trip. Her answer? I am going too! A turbulent, passionate, three-year relationship followed. She was his model, assistant and lover.

After nine months of apprenticeship Miller began taking her own assignments. She and Man Ray purportedly discovered the photographic technique of solarization technique together, and practiced it concurrently, but its discovery has largely been attributed to him.

She opened her own studio. She continued modeling and worked with Paris Vogue photographers George Hoyingen-Huene and Horst P. Horst.

Miller found herself in the epicenter of the Surrealist movement in France and all that entailed. The movement’s focus on the dreamlike mind and chance associations would influence and shape her artistic vision for the rest of her life. And while that Hollywood film of her life has yet to be released, she was in a movie. She played the statue in Jean Cocteau’s film, Blood of the Poet in 1932. Writing about Lee Miller feels like a game of name dropping at its finest.

It got messy. As with many bohemian groups of artists of the time, so-called “free love” was common, and Miller participated with the appetite one might expect, given her taste for adventure. Man Ray was jealous and they argued. She had an affair with the married Egyptian businessman Aziz Eloui Bey. He left his wife, who committed suicide. Man Ray threatened violence.

Miller escaped the turbulence and retreated to the U.S. There, she set up her own Manhattan portrait studio on East 48th Street. She achieved considerable success photographing the likes of Charlie Chaplin and exhibiting her photography at the Julien Levy Gallery along with such artists as Cecil Beaton, Man Ray, Steichen and Edward Weston. 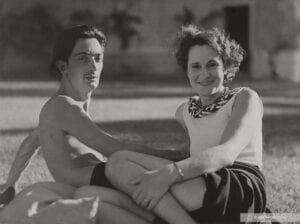 In 1934 Bey arrived in New York, and the idea of an exotic life in Egypt must have proved too tempting. They were married within days of his arrival and off she went to Egypt, leaving her brother to shut down the studio.

Miller and Bey set up a household in a mansion in Cairo with marble floors and many servants, but Miller was not constituted for domestic bliss. Despite arranging elaborate trips into the Egyptian countryside with newly befriended expats — during which she took memorable pictures of mosques and landscapes — she escaped in 1937 back to the welcoming arms of the Paris surrealists.

The first day back she was invited to a surrealist ball. There she was reacquainted with Max Ernst and Paul Éluard, buried the hatchet with Man Ray and met her future husband, the British surrealist painter Roland Penrose.

There is a photograph taken by Miller in the south of France that summer. Pictured outdoors around a picnic are Penrose, Man Ray, Ady Fidelin, and Paul and Nusch Éluard. The women are topless, smiling, soaking in the sun. The men are fully clothed. These women were all artists in their own rights. I like to think it displays womanly camaraderie and rebellion, not the male gaze.

Miller did go back to Cairo, but in 1939 Penrose came to visit and that year she packed a suitcase full of photographs and left for good. They met up in England and then headed to the south of France. But the war intruded.

They were in Antibes with Dora Maar and Picasso when Hitler invaded Poland. Overcoming a series of obstacles that took them from car to boat to train, they arrived back in London to find the city under siege.

Miller and Penrose threw legendary parties before, during and after the bombings, featuring surrealist party games and a guest list of now iconic artists including Braque, Miró, Tanguay, de Chirico, Brancusi, Giacometti and Magritte — not to mention the artists listed earlier.

Penrose was lecturing on camouflage techniques and serving as an air-raid warden. Miller started showing up every day at the British Vogue offices until they finally hired her in 1940 to shoot mostly celebrities and fashion. She must have found this cloying.

Miller began photographing the war on her own, which she gathered into the book Grim Glory: Pictures of Britain Under Fire, with a forward by the noted American journalist Edward R. Murrow.

Her surrealist training meant these photographs were unlike any other war photography — simple, witty, poignant and without gore.

Some of her male friends were American war correspondents who had steady access to GI supplies of booze and cigarettes. They helped her get accreditation. This ended up being her entry into what most would consider her greatest body of work, capturing the pathos of World War II. 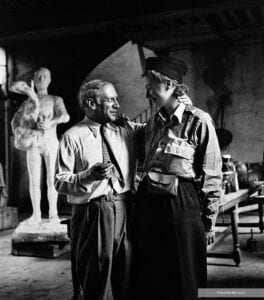 Six weeks after D-Day in 1944, Miller went to Normandy. Not because she was invited, her male equivalents had already gone without her, but because she wanted to be where the action was. She took 35 rolls of film, wrote 10,000 words and the impressed Vogue editors published her full story with a double-page spread including 14 of her photographs.

To his credit, the same Condé Nast who had saved Miller from an early demise, wrote,”We must not allow people to think of Vogue as a really frivolous periodical, unaware of the serious challenges that have been going on in the life, interest and psychology of women.”

Lee flourished under the extreme circumstances of war. She did not hang out in the officers’ tent and wait for permission to go. She just went.

She was often embedded with combat soldiers, eating field rations and sleeping wherever she could. She boarded a U.S. Navy tank ship for a night crossing to St. Malo, France, only to discover she was the only journalist — male or female — in the middle of the action. Her thanks? She was arrested for entering a combat zone and put under house arrest in Rennes. Vogue published her story in the October 1944 issue.

Clearly not a rule follower, in August 1944, she bluffed her way out of lockdown and hitched back to Paris, arriving the same day the city was liberated from the Nazis.

Miller went to check on her friend Picasso. A famous photograph captures them looking with amusement into each other’s eyes, he in baggy pants and a tie, her in uniform. Picasso proclaimed, “This is the first Allied soldier I have seen, and it’s you!”

In 1945 Miller switched to accreditation with the U.S. Air Force, which gave her better support and permission to go wherever she pleased.

She always wanted to be where it was hardest to get. She went with LIFE magazine journalist Dave Scherman to document the Russian-American meetup on the banks of the Elbe River in Germany.

When Scherman was sent to Nuremberg, Miller tagged along. They were among the first to enter the Dachau concentration camp on April 30, 1945. Miller sent photographs and wrote to her editors, “I implore you to believe this is true.” These are among the most graphic of Miller’s images. She reported it was so horrific, that even those seeing it firsthand had difficulty believing. 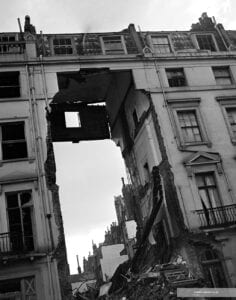 There is another famous photograph of Miller. She is taking a bath in Hitler’s bathtub at his Munich apartment the same day he committed suicide in his bunker.

Her muddy boots are displayed beside the bath. It was her first bath in weeks. The Germans had not yet surrendered. She and Scherman visited Eva Braun’s villa, and witnessed the burning of Hitler’s alpine Eagle’s Nest retreat. The photographs taken during these pivotal days accentuate the everyday normality the Germans maintained, which angered Miller.

She hadn’t been in contact with Penrose for seven months. He had given up. She returned to Paris worn out and haggard. They reconciled. She got pregnant with their son Tony. Bey granted her a divorce and she and Penrose married in 1947. They bought the 120-acre Farley Farm near London, (full of art and open to the public now as Farleys House and Gallery, Home of the Surrealists). Miller claimed those first years of her marriage were among the happiest of her life. Artists friends flocked to the farm where she created spectacular surrealist-inspired dinners.

Miller covered the 1948 Venice Biennale for Vogue. But by 1949, she was being assigned fashion photography and frustrated.

Penrose had become a celebrated writer, curator and intellectual and Miller began to wither. Most tragically of all, after 1953 she stopped publishing photographs. And no matter how amazing a gourmet cook she became, no matter that James Beard came to visit and House & Garden magazine ran a full-length feature on her cooking, she was not creating bodies of work in her amazingly approachable way.

Lee Miller had gone from being named by Vanity Fair as one of the seven most distinguished photographers in the world in 1934, to being largely forgotten as an artist. Penrose was Knighted. She was Lady Penrose, and refused inquiries into her past work.

Longing for a Hollywood ending? The real life happy ending is that she and her estranged son, Antony Penrose, reunited after the birth of his child, her first and only grandchild.

Miller died in 1977 from cancer. Her son, a photographer in his own right and the author of the definitive books on his mother’s life, now runs the Lee Miller Archive. Here’s hoping that soon that Hollywood film might make Lee Miller the household name she deserves to be.

The Dalí Museum’s planned exhibition of Lee Miller’s work was postponed
in the coronavirus crisis and will be rescheduled. You can subscribe
to the Dalí’s email newsletter for updates, or follow them on social media.

Grim Glory: Lee Miller’s Britain at War is a current exhibition at Farleys House and Gallery.
They’re currently running a crowdfunding campaign, in an effort to keep her home and the gallery open.
crowdfunder.co.uk/farleyshouseandgallery-1