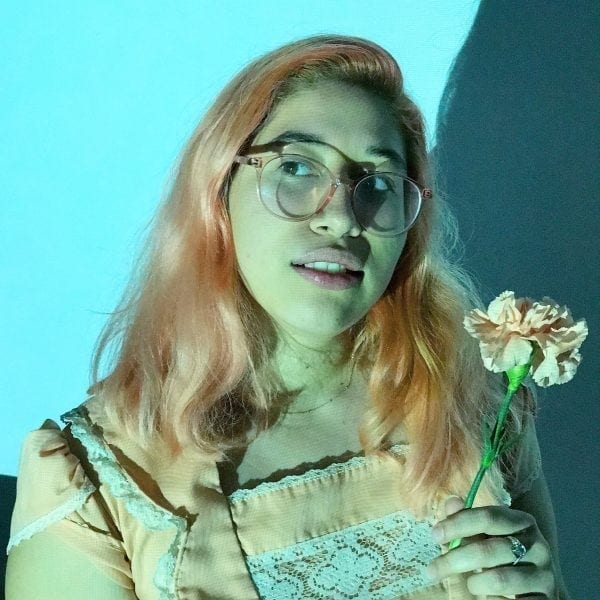 Catching Up with Artist Libbi Ponce

The video and multimedia artist opened up about her influences, memory, and ideas about the next generation of young artists in the Tampa Bay Area.

At 20 years old, Libbi Ponce is already an artistic powerhouse—though due to her intrinsically humble nature she may resent  such a description. She recently finished up a residency at Oxbow School of Art in Michigan, enrolled as an art student at the University of South Florida, serves as a volunteer coordinator at local gallery Tempus Projects, and works as an art instructor for a free teen open studio at the Tampa Museum of Art, just to name a few of the many ways she spends her time.

ST: What do you see for the future of art in Florida, specifically related to today’s youth? Is there any advice you’d offer young people who are interested in the arts?

LP: What I’d like to see most is free accessible art programs for disadvantaged children and teenagers, in particular youth of color. Having the time, space and resources to create for even an hour is so valuable—even as a kid. When I was younger, I remember having art class once, maybe twice weekly? It was my absolute favorite part of the week, getting to try out watercolors and play with clay. This developing of creative outlets and trying out mediums that you didn’t even know were possible is so crucial to discovering interests and creating your sense of self when you’re young. I never went to an art program outside of my school until late high school, where I became aware of other opportunities. Especially with cuts to—or outright elimination of— art classes in school, programs by other educational organizations are so important. I’ve witnessed some initiatives such as programs like the free teen open studio at the Tampa Museum of Art. I do know that there is a push for the private sector to step up and support the local arts programs, like the Tampa Bay Arts Bridge Fund initiated by a couple of private family foundations.

If I’m giving advice to youth, one thing I’d really like to emphasize is school. Everything I’ve learned about art-making and navigating life as an artist has come from school and the people that I’ve met there. School is a community in and of itself, but the connections you can make with others can help build future communities. Doing well in high school can seriously help you in the future in college. Like to this day I think about how a 0.25 percent difference on an exam test score has resulted in my ability to attend university. Just try again and again. I owe my ability to do what I do now to USF scholarships, FAFSA, and the Bright Futures scholarship.

Another thing I really want to emphasize how important I think in-person community and engagement is. If you don’t know where to go, just ask around! Ask your teachers, ask your peers, go to the places and figure out if it’s your type of scene. Ask someone what brings them to an event and get to know them. Everyone has a story and people will share if you ask and listen. It’s really just being nice. And honestly, the future of art in Florida is so mold-able and ready to be shaped by whoever wants to participate. So many of the spaces I know and frequent in Tampa are artist-run spaces. If what you want doesn’t exist— figure out a way to make it! Friends and colleagues of mine have started exhibition spaces out of their homes, cars, or even just a corkboard in a hallway. But even in larger institutions, don’t be intimidated! A warm smile and eye contact can set the stage for professional relationships to start. Just a little can make a lasting impression.

Can you talk about the intersections in your work relating to memory (abstract) and installation (concrete)?

LP: I don’t really feel like—at least the installations that I do—are concrete, at all; it’s definitely always ephemeral and temporary and dependent on coming into this experience. I think it would be cool to do like a site-specific permanent installation, maybe one day in the future. I’ve never done anything like that. I do think that the objects and materials that I use in the installations are tangible, but I don’t feel like the space itself is tangible. I feel like that spaces that I make are part of me desiring for me to make them tangible, but they’re not. Even to me it’s just this sort of dream that I am trying to get to or achieve or create. I feel like you are always aware that you’re in real life. They’re definitely always fragmented because a lot of these objects I use in the installs are related to my own memory, or they have some sort of personal history attached to them and I feel compelled to see them in that way. Installs for me are physical constructions of imaginary spaces of mental contemplation and thoughts. Objects are taken from memory and placed together to be analyzed or highlighted; they’re taken out of context and then highlighted to explore different nuances within them. But I definitely think memory is abstract.

I know that other people don’t always “get it.” I enjoy people making their own conclusions. Art is not always about me trying to specifically say something else to someone; I always love to hear other people’s interpretations.

Speaking of memory, I’m remembering “hot tub,” the interactive install that you did in 2016 from the show “Barely There” at Parallelogram Gallery.

I think that a lot of that install—and I still think I was trying to figure out at that point what I was doing—but I did know that I wanted a space for people to sit around in and sort of be silly. Everyone’s pieces had to relate to intimacy in some way, so I was thinking about intimacy in weird, tiny specific ways, but somehow it manifested into that. I really enjoyed that and I still very much like that piece, but as far as physically bringing people together as far as a location or a spot, I think that’s one of the biggest things I take away from it. The same way that a table and chairs will bring people together and they just sit and talk about whatever it is. That was so long ago!

That piece in and of itself is a memory now.

Typically because a lot of the installs I do are temporary, I know that the only remnants of them are memory — they turn into memories themselves. There’s photos, documentation or whatever but it’s never the same thing, its always trying to communicate what it was to somebody else.

Who and what are your biggest influences?

I’m influenced by family; my tias, primos and extended family, and also by domestic spaces and objects that I have a personal history with, and further, questioning capitalism’s place within them. Taking agency in identity and realizing one’s identity within the rest of the location that you’re at and everyone else who inhabits that, and how upbringings are different, how experiences vary from person to person and what you learn.

What projects are you currently working on?

An installation in a residency apartment here in Tampa (as part of Lector Social Club) that is influenced by the apartment’s proximity to the first domestic spaces my parents inhabited upon their arrival to the United States. I’m also working on a Fulbright application to conduct arts research in Ecuador, dealing with issues of family, immigration and oral histories as opposed to the main narratives constructed by large corporate media. In addition, I’m working in collaboration with Offsite Project. Offsite Project is an online exhibition space and residency. The exhibit opens July 19th on the main website. It’s titled “Bili’s House” and is the creation of the house Bili Cepon comes back to while she’s away from her dimension, her planet, and her home. “Bili’s House” also serves as a data and memory storage location.

What are you able to say through Bili Cepon that you might not be able to say as yourself? (For those unaware, Bili Cepon is Ponce’s alter ego—a space/time/dimension traveler who often gets stuck places, oblivious to any shortcuts that might exist. She is trying to get back to her home, which is in danger of colonization.)

With Bili, it’s so freeing to create an alter ego, I think everybody should do it—everybody probably has! But there’s an extent to which they revel in it or not, right? It’s just like this other, this character that can do and embody dreams, frustrations, energies and silliness that I have, or what I want and aspire to be in an odd, abstract way—because I could never just be what she is. She’s still susceptible to my own vices and gaps of knowledge and oblivion too. Because she’s a different intense version of all those other things, then the vices and gaps of knowledge are also intensified.

It’s sort of a private self that can be public. I feel like she’s a way of channeling a lot of things that kind of compose my being, but also why I try to become more professional IRL, or more “adult,” because I can channel all those things through her. [I can write it off] and be like “That was just her!” I feel like even now, just talking about myself and how I interact with other people, I think I’m very easy to read, I feel very open—if anyone wants to know anything, I don’t feel that I try to hide or keep things away.

She’s definitely still under development and I’m excited to keep working on her.

christianity was a tool of the colonizers: milagro 2 plant city (2018) 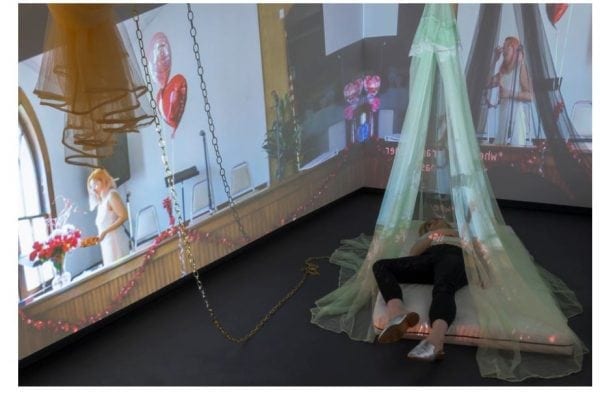 Christianity Was a Tool of the Colonizers: Milagro 2, Plant City (2018)

Where did the name originate?

The name is a mix-up of the letters that are in my actual name. A regular at work calls me that. I told him my name was Libbi, to which he was like “Bili!” – I  don’t know why he said that. He always calls me that. One time I asked him what Bili’s apellido is (Spanish for last name). When I told him, he came up with Cepon — so that’s how Bili Cepon came to me. I don’t think he knows!