While the art market has slowed drastically,
Carrie Jadus finds inspiration and paints on 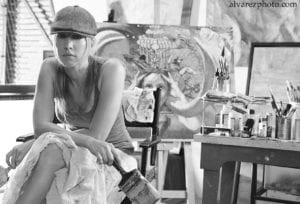 When the shutdown hit, painter Carrie Jadus had a distinct advantage over most other artists. She had already figured out how to work alone for long stretches.

“When I started painting full-time in 2006, it was the first time I had been in the kind of isolation that can make your skin crawl,” she said during a phone interview in early May. “I was determined to make it as an artist and get a body of work together, and learning how to work with just myself was really hard. I had to go through a lot of psychological stuff in order to be alone.”

Jadus still works in isolation — in a studio 10 minutes from her home — but she’s far better equipped to handle it. In many ways, her creative routine has not changed much during the coronavirus pandemic. Painting and other fine arts are by and large solitary pursuits, so for visual artists the shutdown has likely been less impactful than for performing artists, who have lost their live audiences.

Jadus agrees, and adds, “I’m better off than most people because I have husband and two children that I live with.” 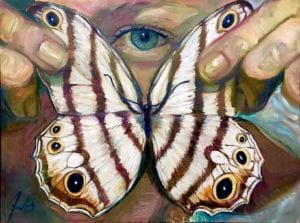 Jadus is married to sculptor Mark Aeling, and she has two sons, ages 19 and 16. The couple own Soft Water Studios in the Warehouse Artist District. Five artists, including Jadus, have studios there. The space has a gallery for showing and selling art, and is a regular stop on St. Petersburg’s Second Saturday ArtWalk.

With those events and gallery hours on hold, Jadus has engaged in an activity she finds, well, excruciating. Prior to our afternoon call, she had participated in a virtual art tour where she had to talk on camera. “It took me like five takes,” she said of the project. “I’m just bad at it, and I feel icky doing it.”

But do it, she does. The pandemic brought the local art market to a sudden halt. “There’s something about talking to someone in person, talking about the art in order to sell it, rather than talking to someone on the phone or having to do a video online,” she explained. “But now it’s more important than ever to remind people that you’re still here.” 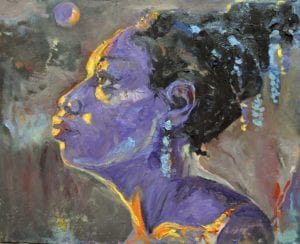 Jadus’s paintings range in price from $300 for smaller works to well into four figures for larger pieces. She also sells fine-art prints at much lower prices.

When we spoke, Jadus said she had not sold an original piece since the Covid-19 shutdown. Fortunately, she had a few commissions in progress. And she continues to paint — for the sake of it, and for potential sales down the line. “During the coronavirus I’ve been in a strange mood,” she said. “There are beautiful flowers in my garden. So one day I just went into the studio and started this gigantic floral still life. It doesn’t fit any theme in my work. I just felt it would make me happy. I started around 2 in the afternoon and worked another four or five hours the next day and finished it.”

Jadus is nothing if not prolific. When in a groove, she can complete three paintings a week, she said, although she has slowed that pace during the pandemic. “I’ve been at it for 25 years and have become efficient with my brush strokes, so things that used to take me a week to do now take me a day,” she added. “I don’t like to drag paintings along too long.” 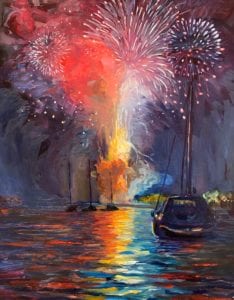 Fourth of July in the Basin

Even a cursory look at Jadus’s vibrant work puts aside any notion that she creates on autopilot. The artist has a sweet spot in the day when the process comes more easily, usually from 2 p.m. to early evening. “If I’m not feeling inspired at any time, I’ll push to a time when I do,” Jadus said. Fortunately for her, unlike some other artists, inspiration is not an elusive ghost she has to chase.

Jadus calls her artistic approach “surreal expressionism,” adding, “I have about three styles that I work in, but they’re all marked by expressive brush strokes and colors.”

The painter, a 1994 graduate of the Pinellas County Center for the Arts at Gibbs High School, allows that growing up in St. Pete and regularly visiting the Dalí Museum made her “very influenced by surrealism.” That influence can be seen in Are You My Mother, a mural on the ArtsXchange building facing the Pinellas Trail at 515 22nd Street South. 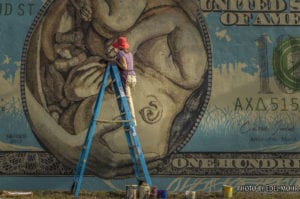 Are You My Mother mural in progress

Thus far, the pandemic has not pushed Jadus into financial distress. She was rejected by the Payroll Protection Plan, and during our interview expressed doubts about applying for the federal program that provides $600 a week to the self-employed. “I’m probably eligible, but there are a lot of people who need it more,” she said. “And I can’t tell you how much I hate filling out forms.”

When Jadus quit her day job and began working as a full-time artist in ’06, she ran headlong into the Great Recession just two years hence. “Ever since going through the experience of surviving that period, I’ve always been aware that there are going to be ups and downs in the market, and you have to make sure to have a buffer,” she explained. “Mark and I both understand that. The previous five years have been really good in arts sales and we’ve been saving for a rainy day.”

The downpour started several weeks ago. “I just hope,” Jadus said, “that this situation doesn’t last so long that my buffer runs out.”

Soft Water Studios has not yet reopened, but Jadus is available to show her work by appointment.
You can reach her cjadus@gmail.com or visit her website at carriejadus.com.