Building an Airplane
and Making Sure it Doesn’t Fly 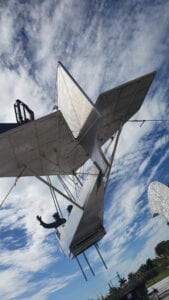 The Benoist sculpture in progress

I have to admit, it always tickles me to see the wide-eyed reaction I get when telling friends from other cities and those living locally who were not aware – that commercial aviation took wing right here in lil’ ‘ole St. Petersburg. Yes, really.

Everyone knows that in December of 1903, the Wright Brothers made history at Kitty Hawk with the first-ever manned airplane flight. What they might not know, is that just over a decade later on January 1, 1914, famed aviator Tony Jannus piloted the very first commercial flight from St. Pete to Tampa – ushering in the age of modern travel that we depend on today to more quickly and easily “move about the planet.”

1914 was a remarkable year for St. Pete – the first year hosting Spring training for the St. Louis Browns (who became the Baltimore Orioles) and the year construction started on the beautiful and still operational Mirror Lake Library.

It is evident that early in St. Pete history, city leaders were visionaries who, with dogged follow through on big ideas and backed by concerted fundraising efforts, realized goals that have had huge historical impact on our city and our world – people like Thomas Benoist, who built the planes that first turned air travel into a culture-changing business.

As president of the St. Petersburg-Tampa Airboat Line, he foresaw that “someday people will be crossing the oceans on airliners like they do on steamships today.”

Lesser known is the fact that the brainchild of commercial flight came from local businessman Percival Fansler, who raised the funds that made that airline a reality. On the historic day, Fansler said, “what was impossible yesterday is an accomplishment of today, while tomorrow holds the unbelievable.” I wonder what he would think if he could see how right he was.

A century later, in “déjà vu” fashion, a new generation of leaders from the preservation, aviation, business, city government and art world take on the mantle of honoring history in a big way – once again through bold planning, effective public fund-raising and creative genius. 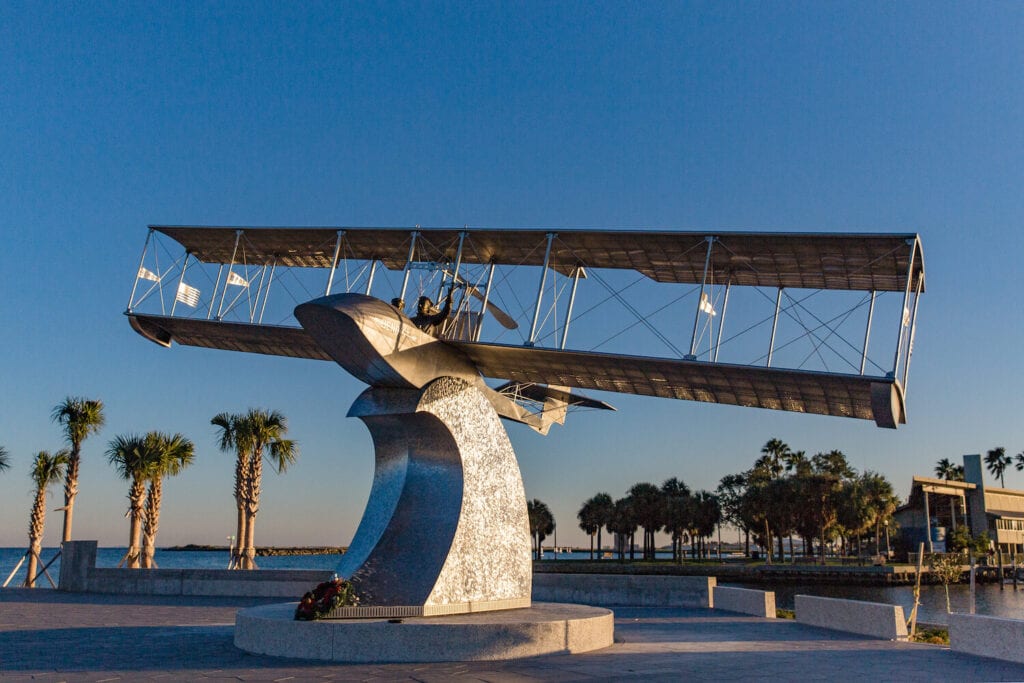 Flight 2014, a not-for-profit organization, was formed for the purpose of celebrating the centennial of the Jannus/Benoist inaugural flight and to build a permanent monument to that mark in aviation history as a part of another historic public works project – the new Pier. It’s a partnership of the St. Peterburg area Chamber of Commerce, Florida Aviation Historical Society, the St. Petersburg Museum of History and the Tony Jannus Distinguished Aviation Society.

President Will Michaels says, “It’s a way to promote the history of Tampa Bay through public art and to complement the Museum of History’s Flight One gallery.”

The search for an artist to build this monument began in earnest in 2014 and the proposals and renderings began coming in.

“This is about the time I became involved with the First Airline Public Art Project,” says master sculptor Mark Aeling, founder of MGA Sculpture Studio in the Warehouse Arts District and a 2016 Creative Pinellas Professional Artist Fellow. “I consulted on design, concept, budgeting and offered multiple renderings during this period.” 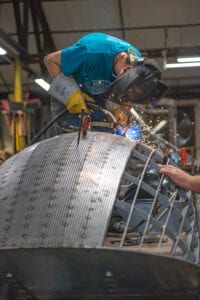 It seems only fitting that both Benoist and Aeling come to St. Petersburg by way of St. Louis – Benoist, in the early 20th Century and Aeling, a century later. The stars aligned accordingly and the contract for the creation of Benoist was officially awarded to MGA in September of 2019.

And now the real work began on one of the most complex “engineering meets art” undertakings in recent memory.

The MGA Design team, headed by Aeling and Alex Kaufman, knew they would be embarking on their greatest challenge from an engineering standpoint. “When you build a plane intended to be a monument,” Aeling jokes, “you have to make sure it doesn’t actually fly.”

As an artist and a sculptor, Aeling has been fabricating shapes that become large scale public art for decades. “It has given me a working understanding of engineering,” Aeling explains, “but I knew we would need another level of expertise. We got that from Bud Karins of Karins Engineering. MGA and Karins worked very closely together on every element of design and fabrication. Each step required approval from a structural engineering standpoint to ensure safety, stability and longevity.”

The first consideration was medium. Sodium corrosion is such a big consideration near the water, not to mention potential hurricane force winds.

The original plane featured fabric and wooden elements – um, no. The best solution was something called 316L stainless alloy – heavy and durable. But just to give you an idea of the complexities of fabrication, I’m nerding out for a minute to tell you it didn’t stop there. The use of electrical current and the application of mild acid in a sort of modern-day alchemy increased resistance to corrosion. Because, science.

The early carving stages – roughing out the figures

Every angle was considered when creating the tilts in the monument that add the feel of movement and the impression of lift. “A 45-foot wing-span that tilts from side to side and from front to back is tricky,” says Aeling. “But I was always taught ‘when in doubt, triangulate.’” 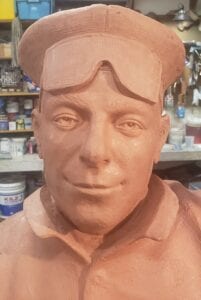 Wings, fuselage and base were created in sections and initially put together in the studio parking lot. Deconstructing, transporting and reconstructing on site was another massive undertaking.

A key part of the monument was, of course, bronze life-like sculptures of Jannus and the airline’s first passenger, former St. Pete Mayor, Abram Pheil, who won the honor with a $400 winning auction bid ($9,000 today).

After five years of planning, the whole process from contract to fabrication to the installation of Benoist took 13 months.

“I was so happy when we completed installation one hour ahead of schedule,” says Aeling. “It was a real feeling of accomplishment. Our entire team lived, ate and slept this project. The focus was intense, but the result was so gratifying for us all.”

What I am most grateful for,” says Aeling, “is seeing social media posts and photos from visitors. It’s incredible how the community has really embraced it.”

Explore the Benoist work in progress at mgasculpture.com/benoist

and the history at airlinecentennial.org