Through June 13
The Gallery at Creative Pinellas
Details here 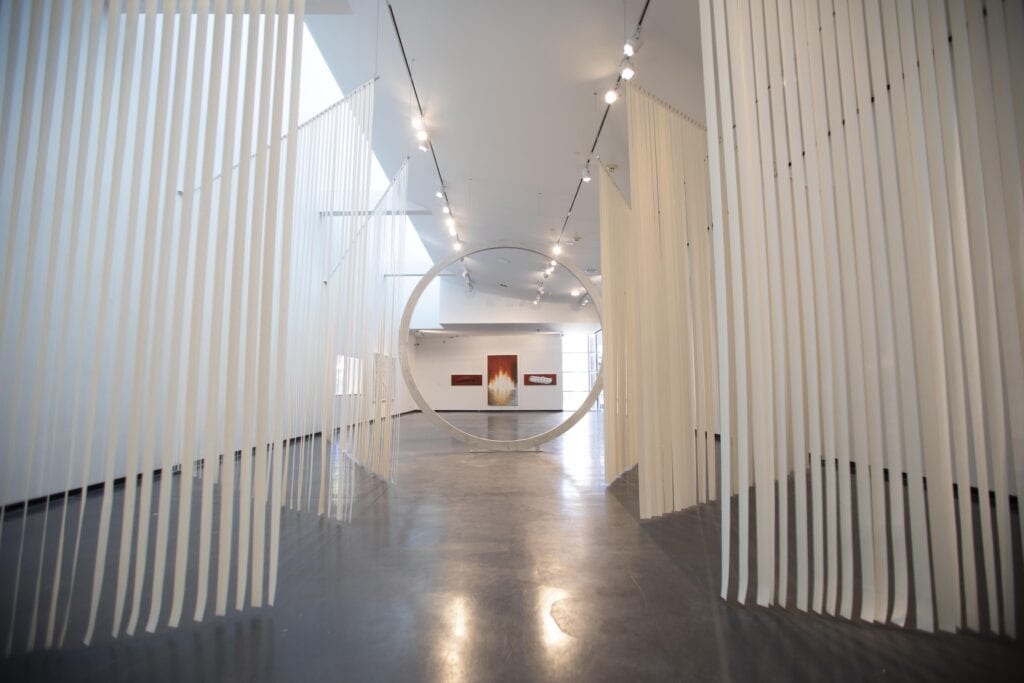 . . .
Collaborative artists Carol Mickett and Robert Stackhouse recently finished installing the centerpiece of their environmentally conscious exhibition, Expanding Waters, in the main room of the Creative Pinellas Gallery. It’s a room-sized, immersive installation titled, Breath of Influence (2021), and it’s the latest iteration of a theme they’ve been developing for more than a decade.

Breath of Influence consists of hundreds of hanging strips of paper arranged as if emanating from a large ring in the middle of the artwork. Viewers are immersed by towering arrays, which create corridors similar to what it’s like experiencing a Richard Serra.

The strips of paper are roughly 12-feet long, and hang vertically with the low end hovering just above the floor. They’re so lightweight that they sway with the changing atmosphere of the gallery in a motion reminiscent of waves in the oceans.
. . . 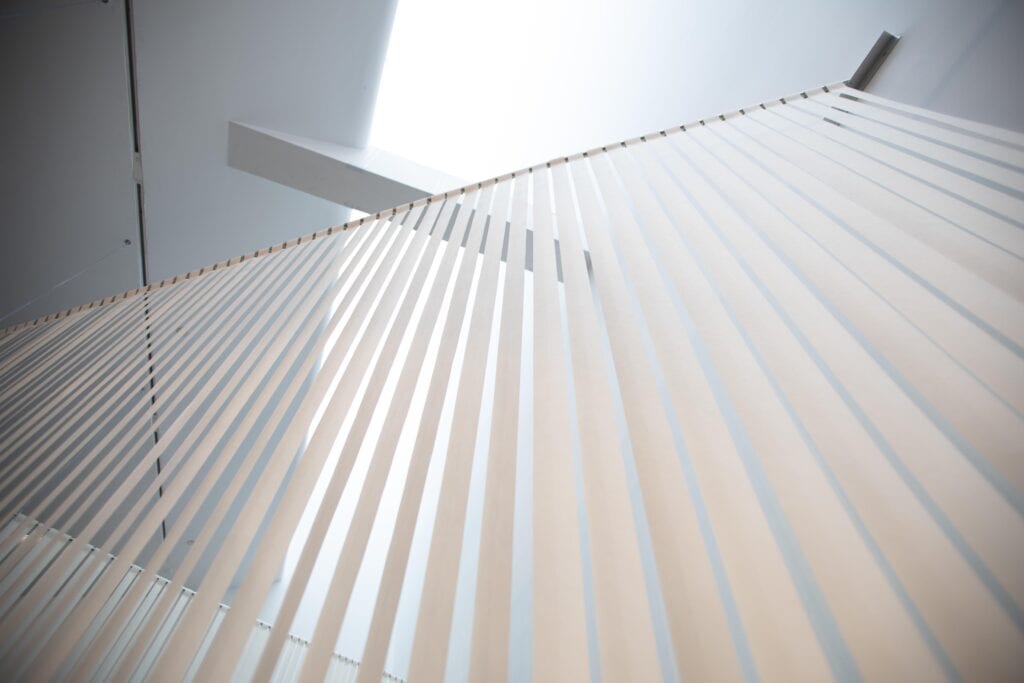 . . .
The artwork has an aspect of fragility to it. Viewers will undoubtedly navigate its corridors carefully as if to preserve it. In doing so, viewers perform the kind of treatment toward the artwork that Expanding Waters motivates its audience to enact toward the environment. The viewer changing their path in order to protect the installation represents the community-wide effort needed for the preservation of our waters. Curator, Danny Olda, writes that the installation, “suggests how even small and seemingly banal actions have effects on the environment around us…”[1]

A free-standing ring serves as a portal inviting the viewer to step through. It also serves as a lens through which the surrounding paintings on view in Expanding Waters can be seen.
. . . 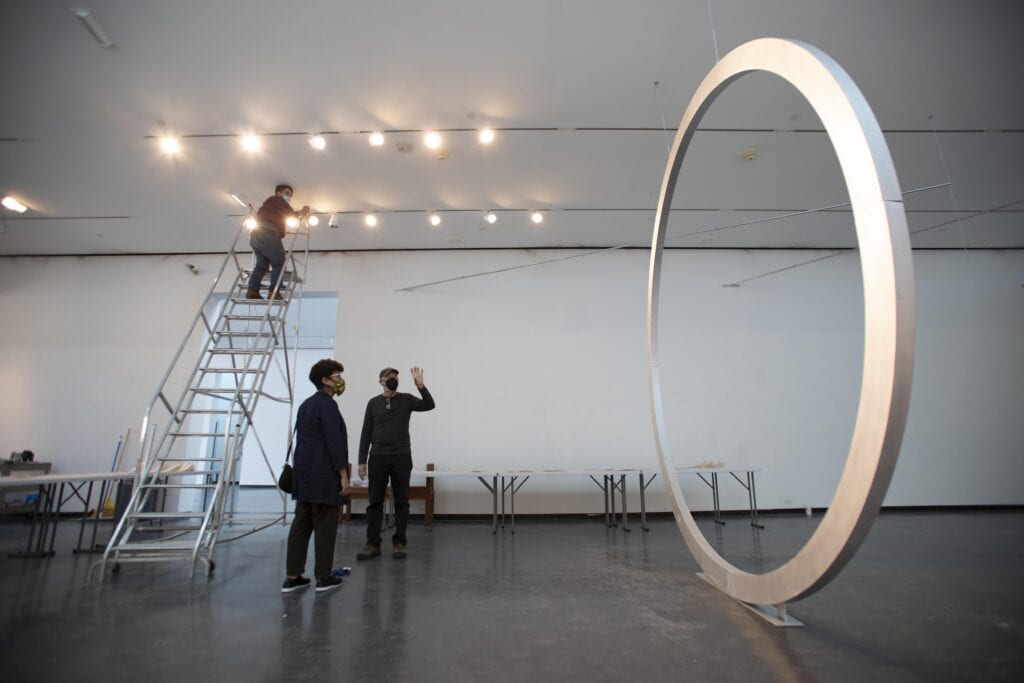 . . .
From one angle, the Moon will appear in the center of the ring as if illuminating the entire gallery. From another angle, images of fire and death can be seen at the ring’s center. The juxtaposition presents the viewer with a choice between tranquility and disaster. Carol Mickett says, “The Painting, First Moon (2013), joins with the installation Breath of Influence to create both an overseeing observer and a source of illumination.”

Mickett and Stackhouse have previously exhibited installations that resemble Breath of Influence. Breath of Water (2012), exhibited at Lab Gallery in New York City, used a similar technique of vertically hanging strips of paper presented in grouped arrays. A review of the installation in Sculpture Magazine describes the artwork as, “thin strips of light-colored wood radiating outward from a central nexus. Attached to beams above and gently moving, the strips echoed what might be described as the wind’s breath over water.”[2]

Breath of Cypress Moon (2013), exhibited at Selby Gallery at Ringling College, was juxtaposed with a painting of the Moon. A review of the artwork in Creative Loafing says, “The 8-foot tall cypress wood sculpture is shaped like a wheel with eight spokes…A walk through and around the sculpture gives a visitor the sense of waxing and waning, of choosing to explore or dwell in the light or dark side of oneself.”[3] . . . 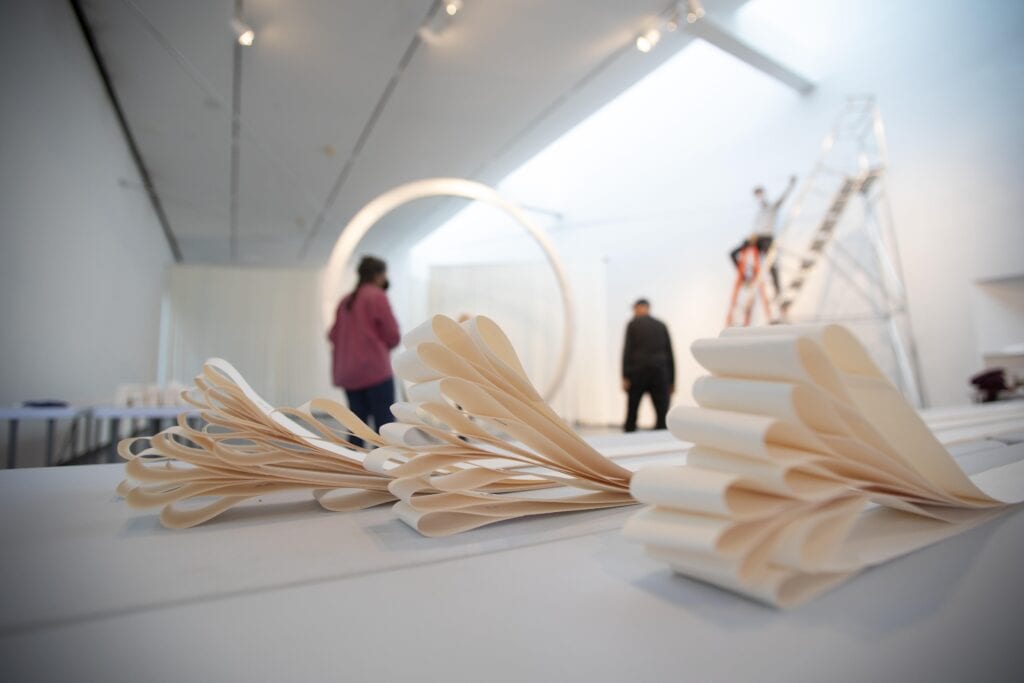 . . .
These two previous artworks provide a context for Breath of Influence. It’s clear that, over the past decade, the oeuvre of the collaborators has increasingly incorporated immersive installations about the declining health of our oceans.

The installation will serve as a structure helping to create a setting for performances over the course of the exhibition. This is the first time Mickett and Stackhouse have designed an installation with the added intention of providing a setting for performances of dance and theater. This expands the collaborators’ interdisciplinary creative process to include artists in the performing arts.

Dee O’Brien is directing Sweet the Moon, which will consist of theatrical performances of 12 scenes from nine works by Shakespeare. The program reads, “In each scene of Sweet the Moon, Shakespeare varies his images of moon, stars, sun, meteors, eclipses, seasons altering, withered trees, pelting rivers, seas, and tides to reflect both their direct and indirect influence on the characters’ lives… Shakespeare’s words are a verbal reinforcement of the all-important crucial message within the story of Expanding Waters: the disastrous effects of climate change on nature, the universe, our lives, and our future.”[4] 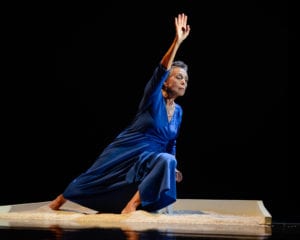 Dance artist Paula Kramer will be performing and organizing dance performances. Kramer says, “I have for a very long time admired the work of Mickett and Stackhouse and always saw myself dancing through their installations or before their paintings. So, when they asked me to create a work for their Breath of Influence installation, I was thrilled. The visual and emotional impact of this work was palpable, and, almost immediately, I envisioned solos and a group work for three or four dancers.

“As always, the dance will be collaborative with each of the performers contributing ideas and choreography.

Kramer explains, “Because my work focuses mainly on past social conditions that remain of contemporary concern, I was drawn to the theme of environmental damage, our connection to our surrounding waters and the immediacy of active intervention.

“Our conversations with Carol and Robert will be an important part of our creative process. Dance improvisation through and around the installation will also be part of our work together, and we expect that there will be the choreographic surprises that always happen.”

Kramer says she and the dancers have all studied with or been exposed to the work of “historic modern dance icons whose most famous works were created with noted musicians, visual artists and writers of their time. The lessons were well taught and well received and continue to influence our individual work.”
. . . 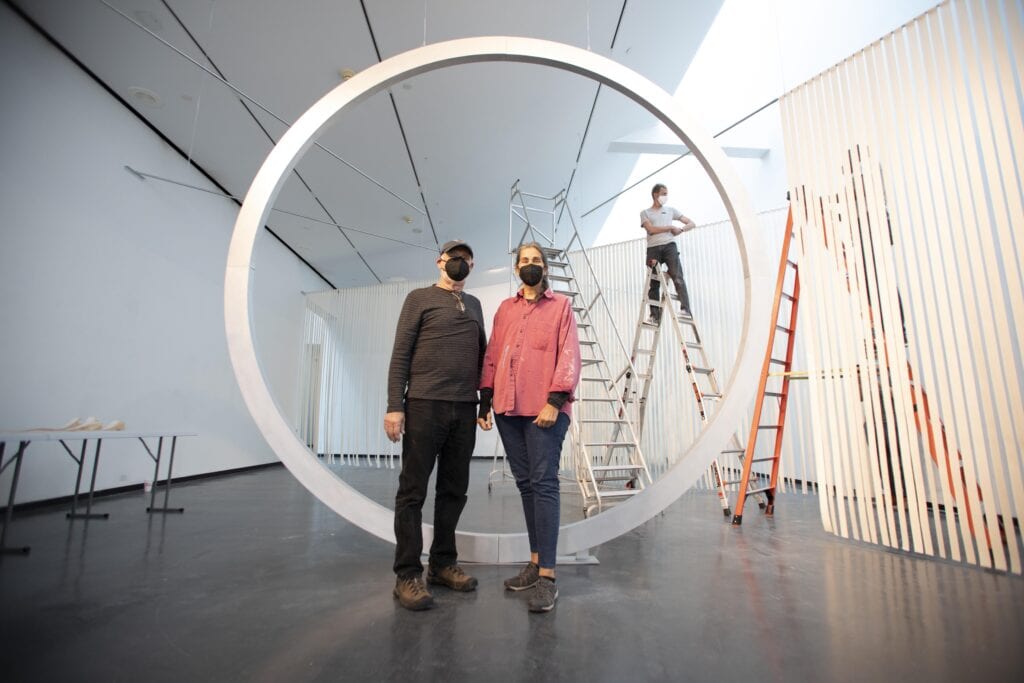