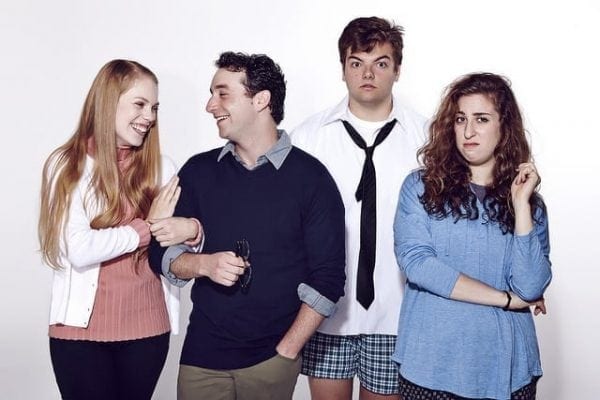 Bad Jews Tackles Tradition and Identity in the 21st Century

That murky area between the truth as we see it and the version that members of our family present us with — and sometimes flat-out surprise us with — has been the battlefield of too many family conflicts.
Add the death of a loved one, and you have the makings of a battle royale like American Stage‘s production of Bad Jews.
Playwright Joshua Harmon’s clash of temperaments and ideologies calls into question duty and heritage, offering wickedly funny one-liners and complex insights into a family’s tightly held beliefs and the ties that bind them — and sometimes strangle them. His script questions loyalty and tradition but doesn’t make declarations, providing much to ponder and discuss after the curtain call.
The award-winning, entertaining dramedy was first performed in 2013. Its story begins the night after beloved grandfather Poppy’s funeral, in a studio apartment overlooking the Hudson River (“you can see it from the bathroom window!”). Three cousins share the flat —  Jonah, Daphna (aka Diana) and Liam. Daphna, the most devoutly Jewish among the more pampered of Poppy’s college-age grandchildren, goes head-to-head with the equally stubborn Liam, whom she shrugs off as thoughtlessly secular and entitled. Liam loathes Daphna’s self-righteousness and bristles at her overbearing demeanor. Jonah, Liam’s low-key younger brother, attempts to remain neutral.

Stirring the pot even more, Liam arrives after the funeral with “shiksa” girlfriend Melody and delivers unsettling news about Holocaust-survivor Poppy’s Chai. Daphna, who was born Diana and renamed herself the Hebrew word for Victory — and spent several months in The Holy Land — naturally, treasures her grandfather’s necklace.

Director Amy Resnick has done an excellent job eliciting natural, not-too-shrill delivery from the four young actors in spite of the play’s high-octane family drama. Her choreography of humorous and hectic exchanges doesn’t overpower the play’s intimate, in-the-moment nuances. Resnick’s direction offers an impressive balancing act as her actors bring out the relatability of Harmon’s script — which is intelligent and sharply amusing throughout (except for a couple of scene-stifling monologues).
Jenny Lester is endearing as Daphna, both because of and despite her pointed interrogations and intolerances. I couldn’t help but feel a little guilty laughing as she reduced Melody to a regrettable stereotype, envisioning the lithe strawberry blonde’s bookshelf of Nicholas Sparks novels and the King James Bible.
Jackson Goldberg is just as eviscerating as Liam, and Matt Acquard, who stays on the sidelines for most of the play, shows us a stellar moment as the sensible cousin Jonah. Kate Berg fleshes out Melody better than the playwright, bringing verve, honesty and conviction to the Delaware-born sweetheart. And as always, the lighting and set are top-notch.
According to Producing Artistic Director Stephanie Gularte, Harmon wrote Bad Jews a few years after attending an awkward Holocaust memorial service that left him considering how his generation will manage the responsibility of passing on this history. The New York Times called it “the best comedy of the season” in 2013.
* * *
Bad Jews runs through Aug. 12, Wednesday at 7 p.m., Thursday–Saturday at 8 p.m. and Sunday at 3 p.m. Special events include a ladies night happy hour 7-8 p.m.on Friday, July 27; a Pride Plus Night 7-8 p.m. on Aug. 3.  For American Stage’s final visual artist collaboration of this season, Tracy Copes mentored Under 20 artist Chancellor Joyer to unveil a signature work inspired by the play and American Stage’s 2017-18 season theme, “We the People.” Joyer and Copes’ work will be donated in a fundraiser for the American Stage 40FORWARD fund campaign.