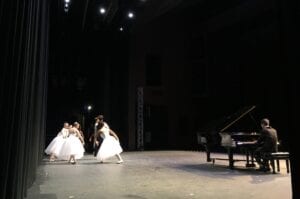 German Language Instructor Bozena Gasior named her son Milosz after the accomplished Polish-American poet, Czeslaw Milosz. In addition to publishing multiple volumes of poetry, Czeslaw Milosz wrote two novels and a memoir, dissected communism in The Captive Mind and won the Nobel Prize for Literature in 1980.

Milosz Gasior struggles to communicate something as simple as what he did over the weekend. He keeps a notebook full of photographs so he can literally show people what he did when his words fail him. Such difficulties with speech are one of the core features of autism.

Bozena Gasior suspected something was wrong at 18 months. “He never uttered a word,” she told me, “no sounds even.” 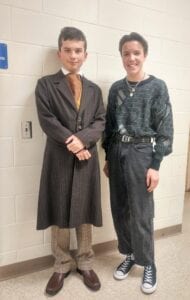 Perpetually at a loss for words, Milosz Gasior speaks through the universal languages of music, pictures, numbers and actions. For someone with severe autism, it’s a necessary adaptation. While he comprehends written text at only a second-grade level, Milosz takes honors math at Pinellas County Center for the Arts at Gibbs High School in St. Petersburg, maintains a photography hobby, sight reads rhythmically-difficult sections of music with ease, enjoys kayaking and playing frisbee with friends, and regularly goes horseback riding at the Bakas Equestrian Center in Tampa via their Horses for the Handicapped program.

Gibbs ESE teacher Colleen Quinn refers to these things as splinter skills. A splinter skill allows a person to succeed at a particular task or set of tasks despite disability in other areas. Splinter skills represent only a fraction of the meaningful skills most people go through life with, hence the name “splinter.” But if a person with autism identifies their splinter skills and dedicates themself to mastering it, they have a chance at success in this ableist world we live in.

“Milosz has a super fierce splinter skill when it comes to music,” says Quinn. “Playing the piano is really his way to reach all of society, because he doesn’t do it as you and I would, sitting on the phone talking.”

When I asked Milosz’ mother when she first realized her son had a talent for piano, she corrected me.

Milosz never sat at a piano by himself and just started playing by ear.

His mother noticed that he enjoyed listening to his older brother play the piano, so she taught him the keys when he was about nine years old.

“We started with 15 minutes because his attention span was just not there,” she says. 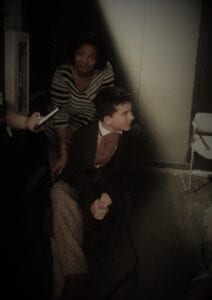 Milosz Gasior waits behind the curtain with Gibbs ESE assistant, Mrs. Smith, for his turn to perform at Gibbs PCCA’s “Dances Through the Ages.”

Recognizing her son’s reliance on images and repetition, Bozena developed a unique system for him to learn music. She drew empty circles in a notebook. Each time her son played a scale or completed a task, he colored in one of the circles. Once they had a system in place, Bozena signed Milosz up for private piano lessons.

Now Milosz practices about four hours a day at home.

At school, Milosz plays for his fellow music students, and he enjoys listening to them play for him in return. He’s also played at Gibbs PCCA concerts, including November 2019’s Dances Through the Ages, where he accompanied PCCA dancers as they performed live at Gibbs’ Grande Theater.

With all school performances canceled due to the pandemic, Bozena started making videos of her son playing piano and posting them to YouTube. This is how I first heard Milosz Gasior play the piano.

You should hear him play Chopin’s Nocturne in E-flat major, Op. 9, No. 2. It’s Chopin’s most famous nocturne, but due to its difficulty, I’ve never seen anyone actually sit down at a piano and play it. To hear it pour out of a severely autistic teenager is just unreal.
. . .

. . .
There aren’t a lot of teenagers, in general, who are interested in playing classical piano these days.

“What 21st-century kid in Pinellas County says, ‘yeah, I want to be a classical pianist’?” says Liu. “I’m not sure, but they come and they learn.” 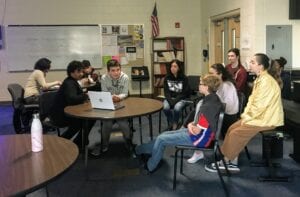 The amount of classical piano students has varied between 2 and 16 during Liu’s 15 years at Gibbs PCCA. Despite auditions, no two students enter the program at the same level.

“The kids come from such different backgrounds when they come into the program,” Liu tells me. “I have to figure out where they are and then fill in the gaps as much as possible so they have the tools they need to get through the program and then to audition for colleges.”

According to Quinn, you don’t see a lot of autistic students in demanding college prep programs like this one, mainly because most don’t get the support they need at home to make it work.

In addition to difficulties communicating their needs, autistic students have shorter attention spans compared to neurotypical individuals. In severe cases, they need someone by their side to speak up for them and prompt them to follow through on things both at home and at school. 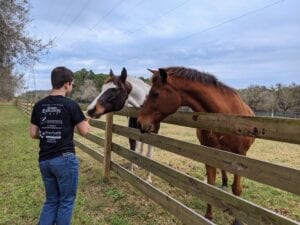 Milosz Gasior at Bakas Equestrian Center in Tampa, where he enjoys riding horseback.

At school, help comes in the form of an Exception Student Education assistant. Milosz had an ESE assistant at his PCCA audition just to make sure he could communicate with the judges. Prior to the audition, Bozena worried that her son wouldn’t be able to respond properly to the judges’ requests — not because he couldn’t play something, but because he didn’t understand what was being asked of him.

When I interviewed mother and son via Zoom, Bozena was helping Milosz prepare for his end-of-semester exam.

“What are you going to say?” she asks him.

“I will play…” she prompts him. 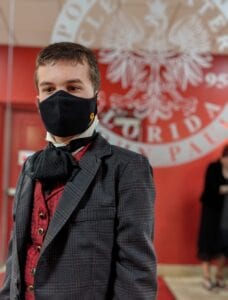 Normally when I interview creative folks, I ask them what inspires them and what challenges they’ve faced along the way. But no matter what question I ask Milosz, he answers, with great effort, in as few words as possible. When I asked him if he enjoys playing the piano, he said “yeah.” When I asked him what else he likes about Gibbs, he said, “listening.”

“Listening to what?” Bozena asks him.

He’s nice and polite, but I can tell he’d rather be playing the piano than answering my questions, so I let him get back to it.

He returns to the piano like a freshly-caught fish who’s just been thrown back into the water. Sometimes actions speak much louder than words.