Flooding in a swamp, from May to early October (the wet season) transforms the cypress dome interior.

An earth red is actually a prominent color in the dry season – from late October through April. 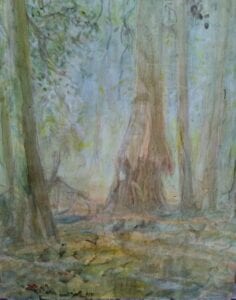 Cypress Interior Dry Season (in progress)_2020_oil over silverpoint on panel_24inx18in

The reddish tinge in the swamp interior is from the bark of cypress trunks and the fallen cypress needles. Soon seasonal rains, almost daily, will start to fill the swamp. The water level rises remarkably, from once dry to knee level and higher in some of the deeper depressions. 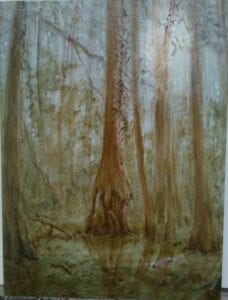 The second view of the swamp interior, in the wet season, has a very different feel. In the wet season, you sense the moisture in the air, and it softens color and light. Although the red remains, its now cooler in tone.

In the dry season you have more distinct lights and shadows, as well as a greater range of colors. The wet season feels more tonal and subdued.

Each are engaging for me as a visual artist and as an observer of nature.