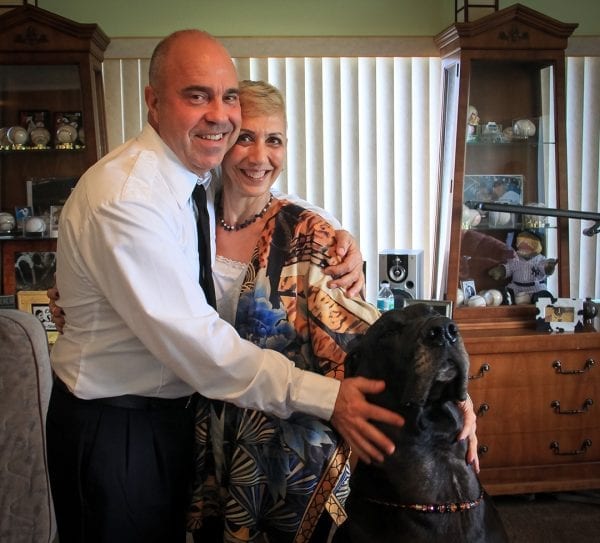 Paul and Rozz Potenza with Bean. Photo by Daniel Veintimilla

At Home with the Potenzas

Mixing work, pleasure and bad timing with the favorites of Pinellas theater.

Paul and Roz Potenza are my paisans, my Italian-American sister and brother from another mother. More importantly, they’re both accomplished, award-winning actors in the Tampa Bay theater scene.

It would be unfair to lump the couple into one RoPa composite. They are indeed distinct individuals: Paul is cheerful, gregarious and outspoken; Roz is warm, generous but more reserved and measured in her approach. They share in common an uncanny ability to connect with audiences.

While working on this piece, they invited me and photographer Daniel Veintimilla into their Oldsmar abode. First impressions include an immaculate home and garden with kitsch and humor. A banner in their front yard reads, “A house is not a home without pawprints.” Next to it, a vintage, orange-painted wrought-iron bench props a turquoise mermaid statue.

We visited twice over the past year. Our most recent involved a traditional homemade Sunday dinner (but with less cholesterol than childhood meals), and the conversation flowed fast in many directions. During our first visit, I apologized to Roz for interrupting to ask her a quick question. She smiled and waved her hand and said, “We’re Italian — we’re interruptors.” 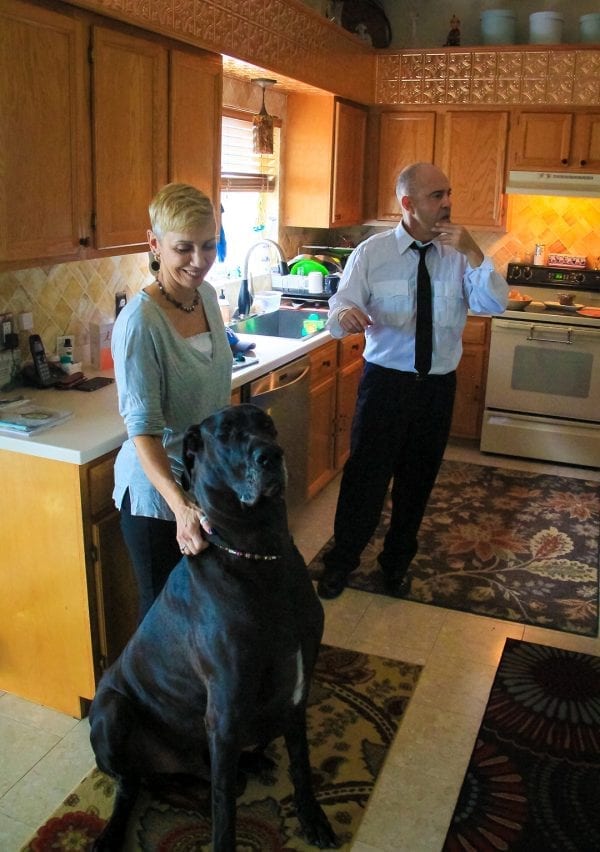 Candid shot of Paul listening to Daniel while Roz and Bean have a moment. Photo by Daniel Veintimilla.

Before spending some quality time with the Potenzas, I knew them as a fan and theatergoer. As a fellow actor, I recognized authenticity in each of them (I knew of Roz as a fellow former ETC performer — we performed with Ruth Eckerd Hall’s resident children theater company at different times).

I stood up and cheered when Roz bravely and graciously accepted the Jobsite Theater Recognition Award in 2012. The crowd gave her a standing ovation in acknowledgment of her having experienced an extended absence from the theater to undergo chemo for breast cancer (thankfully, she’s in remission now).

A few years later, I watched in awe as Paul transformed into an unrecognizably gruff and sickly alcoholic in Annapurna. Probably the best play I reviewed during my five-year stint as Creative Loafing A&E Editor.

Another feeling of familiarity comes from common roots. The Potenzas have that up-north Old World-bred way about them not unlike my own Italian family, who moved here from Milford, Conn., when I was a toddler.

Side note: Paul grew up with his mom calling tomato sauce gravy, like my relatives on my father’s side, but Roz’s family just calls it sauce, the way my mom, who immigrated here as a a teen, always did.

Both Paul and Roz endear their friends in and out of the theater scene with their warmth, savvy and no-nonsense genuineness — they are always at the ready with a big hug and a snarky comeback.

By day, the couple runs Design One Jewelers together in Countryside. Though they work and sometimes perform together, they’re thriving individuals with their own projects and interests — Paul is a jeweler and a musician. He collects memorabilia and is a big-time blues fan.  Yankee memorabilia and framed autographs of Buddy Guy and B.B. King adorn the walls of the Potenzas’ dining room alongside past production mementos. 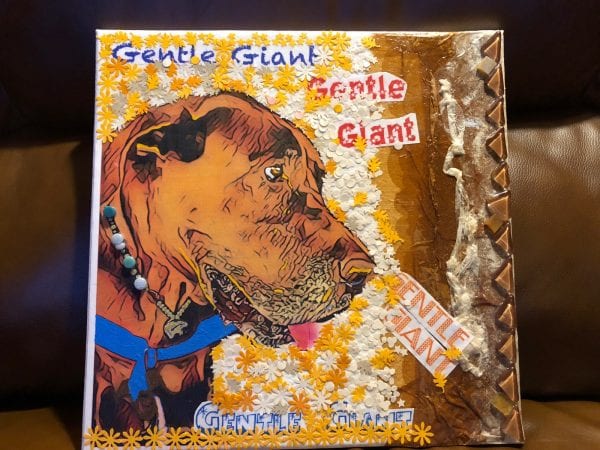 Roz is a visual artist and ardent dog lover. She has a soft spot for bullies and Great Danes, but her heart (and Paul’s) belongs to one especially handsome Dane named Bean.

“I work with a Great Dane rescue group in Florida and South Carolina,” she tells me by text. “I do artwork that is used in auctions and the monies go toward medical care for all Danes, many who are in need of food, nutrition and most of all, love. I’m also involved in Pit rescue group.”

The initial impulse to profile the Potenzas came about in September 2017, when Paul and Roz were about to revive their production of the 9/11 drama, The Guys, at Ruth Eckerd Hall. The one-act centers on editor Joan and Nick, an FDNY captain preparing the eulogies for his department’s deceased firefighters.

The couple had staged the play twice at Jobsite Theater, the Tampa-based professional theater company they’ve been active with both onstage and behind the scenes over the past two decades. Playwright Anne Nelson was even going to attend and stay in their lakeside two-story home in Oldsmar.

During their 2011 run at the Shimberg Playhouse of the Straz Center, they encountered an audio interruption that made for some sweet improv. 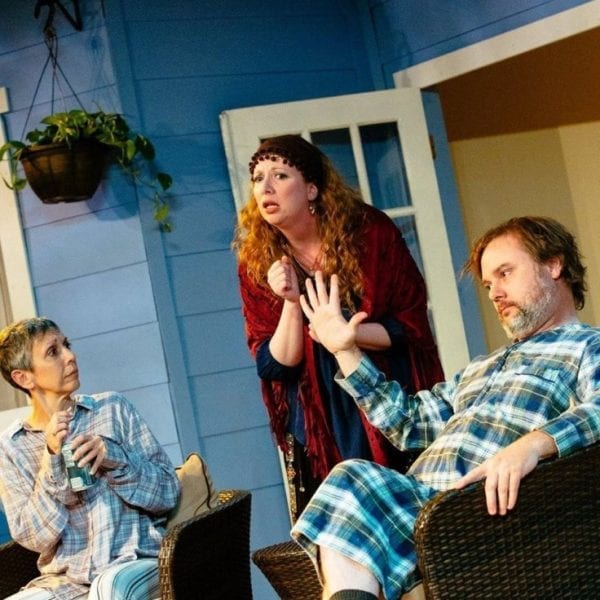 Roz Potenza, Jonelle Meyer and Brian Shea in Vanya and Sonia and Masha and Spike, Christopher Durang’s send-up of Chekov’s plays, produced by Jobsite in 2016.

“Thursday nights — once a month — are Latin night at Maestro’s (the Straz Center’s restaurant),” Paul shares. “We all (at Jobsite) have had to deal with it. It was like, (lowers voice, sighs) “It’s Latin night.” … I come on, and here I am a broken-down fireman who needs help writing eulogies for his brothers and then all of a sudden ba-ba-bum-ba-ba-bum (humming a salsa melody). And then Roz goes, “You’ll have to excuse my neighbors — they’re really loud.” And then weeeee’re off! …  I was like, “Oh, she did that good. She was real good.” She reminded us it was a New York apartment. It was a good, good cover.”

Hurricane Irma wiped out the brief run, not to mention wasted hours of rehearsal. Shortly after, Roz co-starred as feisty 91-year-old Phyllis in 5300 Bluebird Lane, presented by the theater co-op The Lab Theatre Project at Silver Meteor Gallery.

Florida Theater On Stage describes the play as “a fascinating and funny fantasia about the dead Poe visiting Dickinson late one night dragging his coffin behind him.”

The actors and production people at Jobsite, as well as other locals, make up the Potenzas’ social circle. Paul directs, too, so he’s worked with actors in more than one capacity. As business owners, they decompress at home by the lake with Bean as often as possible but manage to spend quality time and holidays with their BFs.

“I have known Paul Potenza for over 20 years now. He is a dear friend, brother and counselor to me. He is one of the most generous persons and one of the best actors I have personally known. His deep love for the craft and for this theater community of ours is only surpassed by his deep love for his beautiful wife, Roz. I am a lucky man to have Paul as one of my dear friends.” 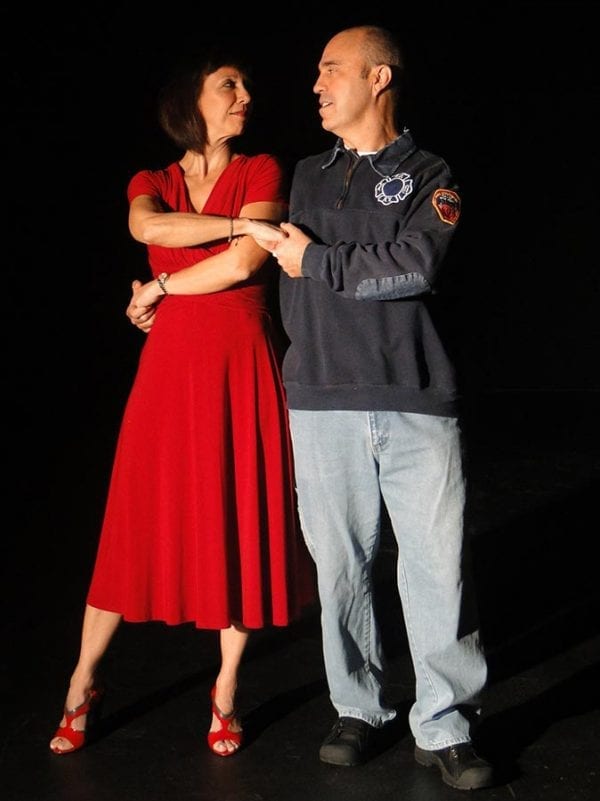 Roz and Paul in The Guys.

Roz: “I thought I was going to meet a blond, blue-eyed beach bum but, nope, Italian guy from New York. You know what you know.”

Roz: “The only reason I married him was so I could have the Italian last name or my grandmother wouldn’t have had it.”

It took a 1988 Kestrel Productions show at the Boatyard Village to bring them together.

“We met doing a play called The Nerd,” Paul shared. “Roz likes to say that it took her moving from New Jersey to Florida to meet an Italian guy from New York.”

Where to Catch the Potenzas onstage

Paul will be co-starring in Edgar & Emily Thursday-Saturday at 8 p.m. and Sunday at 4 p.m. at the Straz Center’s Shimberg Playhouse, Tampa. For tickets, visit strazcenter.org.

Roz will be performing in Lab Theater Project’s upcoming production of Out of the Mouths of Poets, scheduled for February 2019. Synopsis from theater: “Cosmo and Tosca have been married for 35 years. He’s an 85-year-old Greek-American academic; she’s a 65-year-old Italian-American special assistant district attorney. And both create poetry. But when Cosmo dies, it is not the end; rather, it is the beginning of new adventures for them as Cosmo discovers that he can do more than create art, even after death. And Tosca learns it is possible to find love again.” 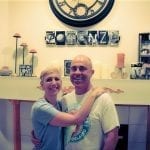 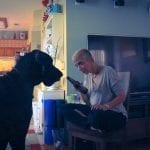 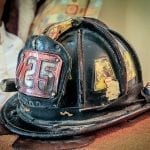 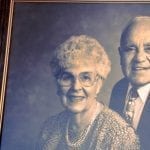 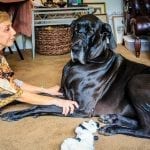 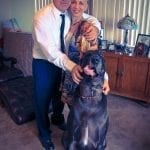 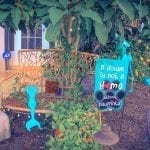 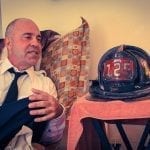 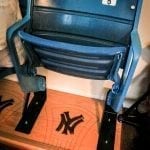