The term “Collaborative” has become so overused and misused that it barely has any unvanilla meaning anymore.

I was given an opportunity to create a performance in an unusually resonant space, and wasn’t entirely sure what to do. So did I hire performers to help share the music I chose, or did I collaborate with others to create something new?

Let’s clear this up. 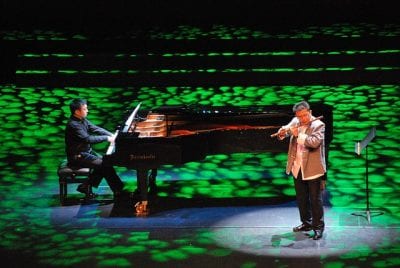 Playing the piano accompaniment got to be too demeaning for some performers.

Collaboration became popular among classical music piano players in the late 1990s. Piano accompaniments were getting so difficult to play and even pieces from the 18th and 19th centuries included passages that clearly only really accomplished and skillful pianists could (and should!) tackle.

But they felt undervalued being called “Accompanists.”

For some reason, accompanying another instrumentalist or vocalist became demeaning to some folk, so they wanted to be called something different, something that would elevate them from a supporting role to a more prominent partnership type of declination.

Now, almost every Higher Education institution in the Western World has a major topic of study called “Collaborative Piano.”

I’ll let you into a little secret:

They are not collaborating!

Collaboration, according to Google, is defined as “the action of working with someone to produce or create something.”

Perhaps the confusion comes from Merriam-Webster’s recently watered-down version: “to work jointly with others or together especially in an intellectual endeavor.”

Nothing about producing something or creativity in that definition, unfortunately.

And even the usually-reliable Oxford English dictionary now states an incomplete version: “Produced by two or more parties working together.”

Worse yet are similarly bland definitions from others who live in their heads, such as the aptly-named Thought Farmers who not only define collaboration as “Two or more people working together towards shared goals,” but dissect their definition into the ubiquitous three-steps to success formula in their article “What collaboration really means.”

Fortunately, there are folk in the real, non-academic world who still remember that collaboration requires some sort of outcome, something produced or created.

According to Carlos Dominguez of Cisco Systems, it is to create value. At least, that what he concludes in his piece “Collaboration: What does it really mean?”

As far back as 2016, the Economist in “The Collaboration Curse” identified how the Western World has forced several unhelpful “collaboration” practices on people who work together to achieve a goal. Nowhere does it mention the production or creation of something, but simply working alongside someone else has taken on the aura of “collaborating.”

So what does that mean for us in the art music world, those of us who enjoy sharing old and new classical music?

Clarity of your role 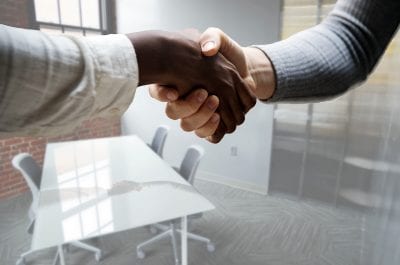 If I come across a piece of music and it requires instruments or voices I cannot play myself simultaneously, I need to hire other musicians to play those parts.

Take, for instance, the Romance for Viola and Piano (video link) by Vaughan Williams. It has a viola part, and a piano part. One person of those performers – let’s say it’s the viola player – decides to make the world a better place by sharing this piece of music. Unfortunately, it is unlikely they can play the piano part as well (unless they have four arms). Therefore, they need to HIRE someone to perform alongside them… someone who can play the piano part they can’t play.

Or, a pianist wants to play some chamber music and comes across La Mort du Nombre (video link) by Messiaen. In that case, they don’t need anyone to COLLABORATE. No, they need to HIRE a violinist, soprano and tenor to join them.

Reproducing a version of what has already been created is not collaborating.

On the other hand, creating something from scratch IS collaborating.

For example, I was given the opportunity to perform in an unusual space – a large, 10,000 sq ft gallery that sounds more like a stone cathedral than any electronically-replicated sound studio.

I decided to write a piece of music just for that space, and put together a concert of repertoire suitable for the space.

But what to include?

I had some ideas, but needed help.

And met a dancer.

So now we have a percussionist/ pianist/ clarinet player and a dancer.

How about something melodic. A flute!

And some oomph. Some bass.

Together we created something new.

Something we all find rather exciting, actually. 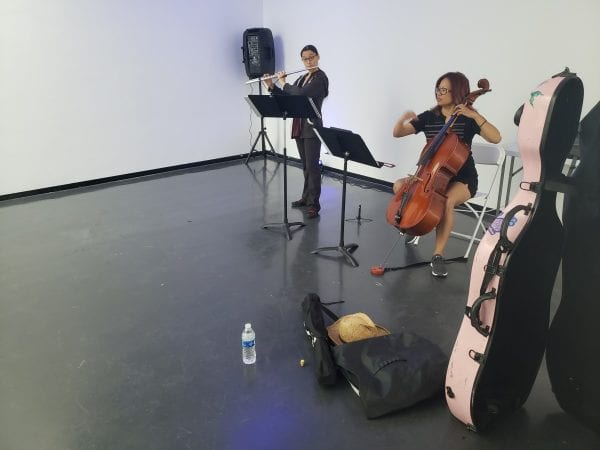 Celicia (flute) and Rose (cello) collaborate with me to create something new.

A new work called Pas de son de Rosé with a surprising twist towards the end, a new work called Heed the Bell, and some new movement to existing music grew from collaborating, not one individual.

It’s all very exciting indeed, and we are looking forward to sharing what we all created together, from scratch.

Yes, we are also sharing pre-written music arranged for various combinations of what we can play, sing or move to, but as far as those two pieces are concerned, no one person can claim ‘creation’ of the work. It was only by collaborating did the piece enter existence.

So, let’s summarize and be very clear:

If you have a task to do and can’t do it yourself, don’t want to do it, or don’t have time to do it yourself, you HIRE someone to perform that task for you. In music, preferably at the same time as you!

If you work with someone to CREATE something that hasn’t been done before – not a reproduction or representation of something that already exists – then you are COLLABORATING with them.

And there is a place for both in our world: hiring and being hired, as well as asking others, or offering, to collaborate.

You can attend the World Premiere of Heed The Bell and Pas de Son de Rosé at 8pm on Friday, May 17th at The Gallery, Pinewood Cultural Park, in Largo, FL. Get more details here.