Playwright Qui Nguyen does not elaborate on what the scenery should look like for Vietgone — but is quite demanding of the scenic and projection designers, as there are over 17 locations throughout the love story of Quang and Tong.

I saw this story as an odyssey of sorts. The play is a hero’s quest to make it back home after war, finding love along the way and eventually making a new land home.

Some of the locations come to fruition via the motorcycle road trip that Quang and his best friend Nhan embark on across the country via Route 66. It was the amazing photographs of mountains against brilliant skies and roadside landmarks along this iconic journey, that really inspired me for this particular set. These images along with propaganda posters and protest posters of the Vietnam war era came together to create a sort of “Hip Hop Pop-up Book” that sets the stage for the wild ride that is Vietgone.

The use of perspective to represent the future and the past pushed its way to the top for me — the long road disappearing into the horizon coupled with bold sunrises and sunsets to enforce new beginnings and endings played a strong role in the color choices I made for the show. We wanted America to feel more dry in comparison to the lush tropical feel of Vietnam so we used a lot of greens and yellows in scenes where we were back in Saigon, while in America we see oranges, reds and warmer colors that emblazon our backdrop to remind us of some of the more arid areas of the US, like New Mexico and Texas.

The projections for Vietgone really assist us in keeping our various timelines straight. In order to enforce those shifts in the narrative Benjamin Ismail (co-projection designer) and myself wanted to be sure that the audience instantly knew what part of the story we were in while staying true to Qui Nguyen’s very comic book style.

The use of a vintage postcard look helps the audience to recognize instantly that we are back on the road trip with Quang and Nhan. A more vintage poster mixed with a comic book feel lets us know we are in a military-influenced timeline. And the use of black and white photography to tell truly human stories stands in stark contrast to the stylized images used everywhere else in the show. 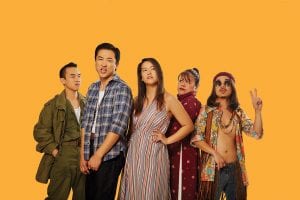 While waiting for the regional premiere of Vietgone to begin, we know from the onset that we’re in for an unorthodox night of theater. The set at American Stage, imaginatively designed by Jerid Fox, looks like a comic book or movie poster — a melange of American and Asian cultural elements and settings. Billboards are used for projections. They entertain and incite thought and emotions throughout the play.

When the house goes dark, a young man comes out to deliver the curtain speech. He introduces himself as playwright Qui Nguyen and warns us to expect only American stereotypes in dialogue.

There will be no “Herro! Prease to meeting you! I so Asian!,” he says.

The Americans in the play, he adds, will say things like “Yee-haw! Get ’er done! Cheeseburger, waffle fries, cholesterol!”

Then he gives the standard “this is a work of fiction/any resemblances are purely coincidental” disclaimer.

He also dispatches a warning: If anyone should meet his parents and tell them about the play, he will hunt us down.

Those who carefully read the program before the show know that an actor in the show (Vi Tran) is actually portraying playwright Qui Nguyen, and the speech is a scripted part of the play (with some ad-libbing at the end).

Tran, as Nguyen, explains that the main characters are Vietnamese and became refugees in America. The play is set in 1975 and these characters, he says, won’t sound the way you might expect them to.

From there we’re jerking back and forth in time, from comedy to drama, like a theatrical funhouse ride.

In an interview with NPR, Qui Nguyen, the Vietnamese-American, Obie-winning playwright calls Vietgone a “sex comedy” about his parents, who convinced him at a young age that their romance was a love-at-first-sight, wholesome love story, but he later learned that it all started as a hookup.

Nguyen takes tales he learned from them and weaves them into a madcap plot: Vietnamese soldier Quang (Jeff Kim) arrives at a refugee camp in Arkansas. Consumed with guilt, he enlists his buddy (Kenny Tran) to find a way back to Saigon. Meanwhile, when Saigon falls, Tong (Sami Ma) can take only her mother (Jodi Kimura) with her when she flees to America.

When Tong and Quang meet, it’s lust at first sight, but Tong is no stereotypically subservient young woman living to dote on a man. She makes it clear that she just wants sex, and she just needs to release some tension. The couple’s mutual unavailability doesn’t keep them from falling in love; nor does her intrusive mother, who’s embarrassingly libidinous herself (lampooning liberated older women is still fair game, apparently).

During the play, the aforementioned billboards project postcards with colorful greetings that read “Welcome to Albuquerque” (and other cities in the play) and contrast with some hard-to-watch war footage.

Nguyen pays homage to the losses of the time without getting us mired in the tragedy but long enough to be honest and respectful of his parent’s painful memories and those who lost their lives and families during the Vietnam War. He shows us the war from his father’s perspective, who expressed frustration when Americans apologized to him.

On the other end of the emotional spectrum, Vietgone fetches big laughs when it’s in slapstick mode. Tropes galore come out to play — ninjas, hippie stoners, rednecks.

It’s also got walkable motorcycle props that are as badass as they are amusing.

As both Intimacy and Fight Director, Dan Granke deftly counseled both the fun-to-watch foreplay scenes and difficult fist fights. Director Brian Balcom helps make the back and forth in time and the humor less dizzying and helps us get past the more long-winded portions of the script. Benjamin T. Ismail (assistant direction/sound) and Christopher Baldwin (lighting) create a compelling atmosphere and Producing Artistic Director Stephanie Gularte even chips in creating the costumes, which are suitably charming.

I have one question to the director: How is it possible that Quang and Nhan able to converse on a motorcycle riding together through the desert using a normal tone of voice but have to shout above the helicopter noise?

Minor issues aside, American Stage presents another exceptional night of theater with Vietgone and all of the actors, who play multiple roles, add nuance and humor to their characters’ lines. Kim effectively conveys the conflicted feelings of Quang and Ma is electric as Tong. They and their costars — who take on multiple roles — are versatile and watchable in every role.