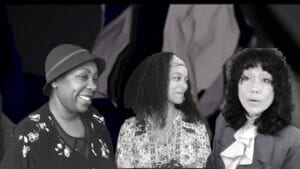 The script and production is very much of the moment – it came together in just three short weeks. Playwright Rachel Lynett discusses the exhilarating experience.

Just days away from the election, American Stage is pushing the envelope way out of the box this season with a virtual play that’s so current, it addresses key issues pertinent to the upcoming Presidential election on Tuesday.

More importantly, Letters to Kamala paints a bigger, vibrant picture of the role of women in U.S. politics and their place in history.

All three amuse and enlighten as they share their wisdom with Kamala Harris. Director Dawn Monique Williams and Tagano are making their American Stage debuts.

According to American Stage’s press, the play delves into “the cultural significance and psychological weight of Harris’s Vice-Presidential nomination.”

Creative Pinellas caught up with playwright Lynett at home in Madison, Wisconsin, to find out how the ultra-now play went from page to stage in such a short time.

“I wrote the play, and then a week later we were in rehearsal,” Lynett says. “So the play changed a lot over time, but we stayed true to the vision that Stephanie (Gularte) and I have both had together.” 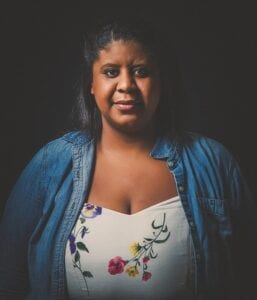 Lynett added that she’s used to a fast turnaround and doesn’t shy away from current societal issues, but she hasn’t written something and seen it onstage it in the time it took for this play to be staged, a mere three weeks. The play was written and rewritten during rehearsals almost daily.

“It’s the first time I’ve done something like this so quickly, which was really fun, and with Letters to Kamala I was challenged to be succinct and really get things done.”

Before the actors would go off script, new stories would come to light and changes would need to be made. “We needed to get to a point where the actors could memorize things,” she explains. “So, that was a big thing.”

Lynett first worked with American Stage when her play Good Bad People was featured as one of the winners of American Stage’s 21st Century: New Plays Festival in 2018.

What’s most newsworthy about Letters To Kamala is the long-neglected spotlight it shines on three pivotal political figures of color in the 20th century who often went above and beyond in their political roles.

As a Congressional Representative, Mink fought for gender and racial equality, affordable childcare, bilingual education and became a supporter of Title IX, signed into law in 1972 and stating that, “No person in the United States shall, based on sex, be excluded from participation in, be denied the benefits of, or be subjected to discrimination under any education program or activity receiving Federal financial assistance.”

Bass was active in the NAACP, the Urban League, the Civil Rights Congress and the Universal Negro Improvement Association. Mitchell served as an official observer of the first democratic elections in post-apartheid South Africa.

Accomplishments notwithstanding, Letters to Kamala doesn’t glorify the women in the play or Harris, either. Controversies and scandals such as Harris’ handling of her job as a state prosecutor and the hubbub around Presidential nominee Charlene Mitchell’s involvement with the Communist party are discussed too.

“It’s just a presentation of the truth, which I think is something that we need more and more these days,” Lynett explains.

When Harris was nominated two months ago, thousands touted her on social media as the first female Vice Presidential nominee of color – only to be corrected in short order by the more diligent posters who schooled their friends on the fact that Charlotta Bass ran for national office as the Vice Presidential candidate for the Progressive Party almost half a century ago.

“Everyone was like, wow, [Harris] is the first Black woman ever to be a VP pick, and a lot of people were like, no, that’s wrong,” Lynett says with a laugh. “And I had always thought congresswoman Shirley Chisholm was the first woman to run for President but it was Mitchell four years before her. So, it was interesting to me how quickly we’ve forgotten our history.

“We were so excited and right to be excited – but you can be excited while also recognizing the people that have come before you.”