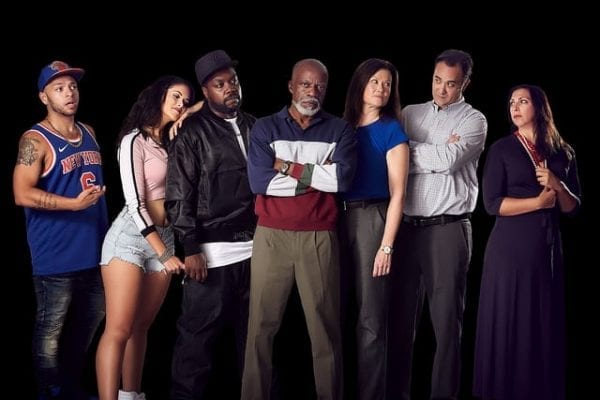 Playwright Stephen Adly Guirgis (The Motherfucker With the Hat, Jesus Hopped the A Train) knows how to deliver a piping hot slice of life. His somewhat broken urban dwellers go rogue or are simply trying to start over. In lesser hands, their problems would be tedious, but Guirgis endears us to his motley crews with raw sentimentality, clever one-liners and relatability.

Norman Lear sitcom comparisons come to mind, but Guirgis writes with a more organic style —  his scripts are more authentic than the fill-in-the-blanks-with-topical-issues-type comedic situations we see played out on TV (New Murphy Brown, I’m talking to you). The playwright not only makes us laugh and relate — he makes us think about the greed and injustices people deal with every day but through a prism that doesn’t cover any situation or person too broadly — he reminds us poignantly with sharp observations that we’re all pretty awful and screwed-up time to time but we have our moments and deserve happiness.

A play that truly showcases Guirgis’s versatility of mood and sharp sense of humor, Between Riverside and Crazy intersects multiple trajectories and life choices.

The 2015 Pulitzer Prize-winning dramedy gets its proper due at American Stage, performed by an impeccable cast under the exacting direction of Benjamin T. Ismail, an accomplished actor/director who’s lent his talents to The Invisible Hand (acting) and Much Ado About Nothing (directing). The show runs Thursdays-Sundays through Nov. 4.

The former NYPD officer/war veteran/widower lives with his recently paroled son, Junior (Enoch King), in one of the last desirable rent-stabilized apartments on Riverside Drive — which he’s suing the city to keep occupying. In the meantime, the crotchety but benevolent ex-cop has become a surrogate father to Junior’s ex-con buddy Oswaldo (Donovan Whitney) and girlfriend Lulu (Vanessa Rendon).

Ex-partner Audrey O’Connor (Vickie Daignault, Good People) also regards him as a dad figure and best friend, but her relationship with him gets complicated when her promotion-desperate fiance, Lt. Caro (Ricky Wayne, improv guru and Tartuffe lead), tries to persuade Walter to settle his lawsuit to score brownie points.

A visit from a zealous Brazilian “church lady” (Sara Oliva) complicates matters even further — we’ll leave it at that.

Making an absolutely stellar acting debut at American Stage, Callender has shown up in the recent past to direct shows at the theater (Jitney, Joe Turner’s Come and Gone and A Raisin in the Sun). He will be returning in January to direct Dominique Morisseau’s Pipeline.

A delight to watch start to end, he plays Walter with just the right grit, restraint and whip-smart charisma. The seasoned actor obviously knows his way around a stage — he serves as artistic director of the African-American Shakespeare Company in San Francisco and has performed in more than 20 plays by the Bard, most recently as Richard in Richard III.

Callender and the rest of the cast provide the right amount of tension and rapport to make us feel like we’re right there sitting in Walter’s dingy living room with them.

If I have to mention one misgiving is that the women in this show are a little underserved, but the performances of their roles are nicely fleshed out.

Daignault is alternately sympathetic and frustrating as the well-meaning and sometimes short-sighted ex-partner Audrey. Wayne effectively fleshes out her guy, Caro, the kind of cop who borders on caricature by virtue of his sheer alpha-male-wanna-be ridiculousness. Wayne makes him human in spite of his desperation.

King, Whitney and Rendon play their parts believably, and Oliva as the wacky church lady is appropriately over the top but watchable. Props to the production team for a set — that along with the natural performances — make us forget once again we’re sitting in a theater at all.