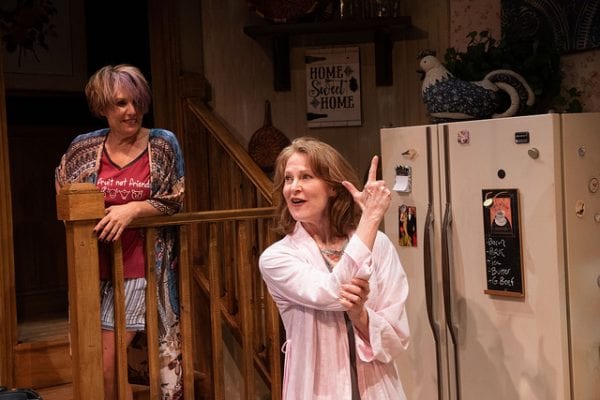 From left, Amy Resnick and Annie Fitzpatrick experience more than domestic bliss in The Roommates.

A New Lease on Mid-Life |
American Stage’s The Roommate

Womanhood, second chances and rebellion shack up together quite nicely in the Tampa Bay theater premiere.

Theatrical comedies centered on “women of a certain age” are hard to come by without the word “Menopause” in the title, but to this reviewer’s delight, The Roommate graces us with a midlife tale that doesn’t focus on hot flashes and sagging boobs. If anything, Jen Silverman’s 2017 play reminds us how sexy, resourceful and vibrant women in their fifties are.

American Stage‘s two-act play begins with spunky Robyn (Amy Resnick), a vegan spitfire from the Bronx, hoisting huge boxes into a suburban Iowa abode. Sharon, her new landlady and roomie (Annie Fitzpatrick), welcomes Robyn with awkward enthusiasm and curiosity — but with a little more glee and curiosity than you’d expect. Early on, we see foreshadowing that Fitzpatrick isn’t quite like her book club friends, and Resnick has more going on than being another New Yorker lesbian with purple bangs.

Thankfully, their”Odd Couple”-style tiffs are kept to a minimum, and the roomies endear us as they discover in one other what they each have been personally lacking. They even get into some mischief trying to impress one another. Their spark has us wondering, “Will they or won’t they?”

Friendship, however, trumps romance. Robyn and Sharon disarm us with their magnetic personalities, intimate conversation and relatable issues such as out-of-touch adult children, online dating anxieties and emergency bottles of scotch stashed above the fridge.

Though billed as a dark comedy, the play will come across to the more desensitized among us as more of a latte than espresso in its humor. Just a little twisted, The Roommate does have some swirls of hedonism and illicit behavior. Its saucy humor would fetch a TV-MA rating on cable (some of American Stage’s promotional copy compare it to Breaking Bad meets Grace and Frankie).

To my disappointment (minor but worth noting), the plot moves from an easy, organic, intimate flow to somewhat of a hijacking stunt midway through, veering into some over-the-top felonious territory — I’ll leave it at that.

“We put a lot of time into our casting process, auditioning actors locally, regionally and nationally,” producing artistic director Stephanie Gularte tells Creative Pinellas in an email. “Technology has made it possible for us to have a live audition with a director who is in one state, an actor in another, and me in my office through video conferencing. We read a lot of actresses for the roles of Sharon and Robyn. We actually read Amy Resnick for both Sharon and Robyn and she gave terrific auditions for both roles. But when we auditioned Annie Fitzpatrick for the role of Sharon, Kristin (the director) and I knew that we’d found our pair. Both actresses auditioned via video so we were not able to read them together. It was thrilling to see how immediately strong the chemistry was between them from the very beginning of the rehearsal process.”

Comedically, the play’s a winner. Silverman’s knack for a well placed beat and a keen overall sense of comedic timing — and the actors’ too — more than compensate for The Roommate’s more contrived situations and discussions. Fitzpatrick and Resnick deliver otherwise innocuous lines hilariously.

Robyn: “Our kids don’t have to like us. They just have to survive long enough to become us.”

Sadly, it might be a little tricky to see The Roommate if you don’t have tickets. The entire run is sold out at American Stage.

(Take that as a message theater owners, playwrights and producers. People do like smart, engaging stories centered on women over 40.)

On the night of our show the house was packed with people of all backgrounds and ages. Fortunately, there’s a stand-by list so you can to capitalize on a last-minute cancellation.

In keeping with the theme of “Life. Out loud,” Gularte chose The Roommate and other plays this season at American Stage because they portray some sort of a bold transformation. In this spirit, The Roommate calls on us to ponder the what if’s of life’s second acts and the exhilaration of breaking our own decades-enforced rules.