A Look At Wearable Art 15
The Dunedin Fine Art Center 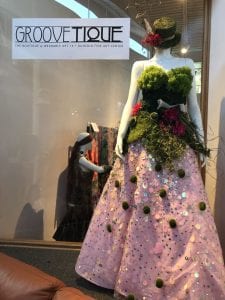 For years I contemplated attending The Wearable Art Show at the Dunedin Fine Art Center. I had no idea the experience would be so mind bending! 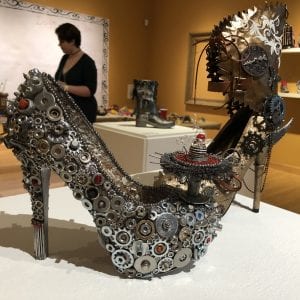 I arrived early enough to enjoy the If the Shoe Fits exhibit and the Grovetique fabric artist show, including work by Lina Teixeira. Attendees were invited to create their own shoe fashions at a table complete with glue guns and fun accoutrement. The exhibit itself was filled with fabulous artist-made re-purposed shoes. My favorites were: Sweet Treats for the Feets by David R. Couture, She Sells Sea Shell Shoes by the Seashore by Aimee Trachtenberg and Hard Wear by Shannon O’Leary-Beck. 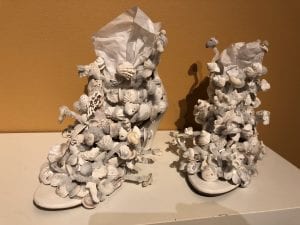 Aimee Trachtenberg – She Sells Sea Shell Shoes by the Seashore

The Pre-Glow party featured live music and a plethora of funky costumes worn by repeat guests of the event. Just before the Runway Show started at

8:30, the audience split – with the major part of the crowd departing for Dunedin Community Center to watch the show live. The rest of us were treated to the high energy of watching on a huge screen while mingling and discussing the designers’ art. 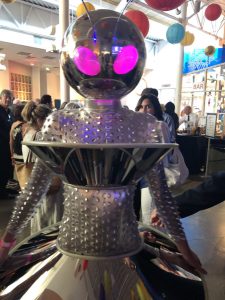 Charles Taylor, the man behind Wearable Art’s sound, lights and video for the last seven years, provided a fantastic view of the models performing under the stage management of Elizabeth A. Crawley. The lights were electrifying, the music exhilarating and the designers’ work intoxicating! The show began with The Garden Fairies + Electric Diva providing Save the Butterflies + the Bees, in which lead designer Mel Wargo, a fibre optic designer from Orlando called attention to the tragic decline of butterflies and bees.

Next up was Post-Apocalyptic World by designer Cindy Linville, a USFSP grad who re-purposes or reuses as much as possible in her designs. Influenced by photography, body painting and fashion design, Linville uses her deep love for the environment when creating costumes.

Melissa Dolce, a model in Wearable Art 8 and 9 for Jonny Hunt, submitted her own designs without even knowing how to sew! Her avant-garde designs have been featured every year since. This year she presented Wizard of Dunedin. Dolce was named Best Local Fashion Designer in Creative Loafing’s 2017 Best of the Bay awards. 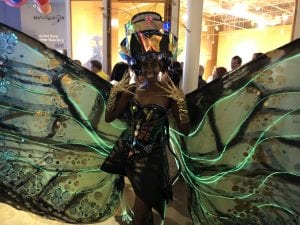 Jenna Barnes delivered SOMA/SAMSA to an enthralled audience. Jenna is a multi-talented visual as well as performance artist. She is well-traveled and a graduate of California College of the Arts.

Mark Byrne used his remarkable balloon art to create wonder and fantasy onstage in his presentation of Paris. 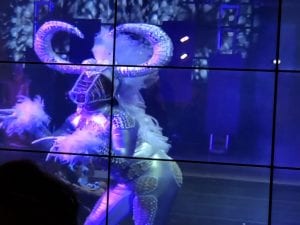 Animal World by Olga Saretsky/Kikimora Studio of Miami was truly mystifying. Her delectable, galactic animal costumes were flawless and her models’ performances were choreographed with passion. Her portion of the show passed too quickly! 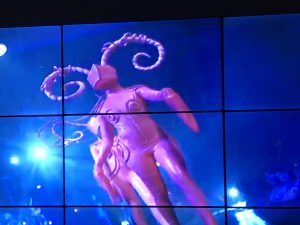 Last, but definitely not least is designer Frank Strunk III. To experience Frank’s designs in conjunction with the emotion of a story visually told through choreography, music and movement is icing on the cake.

This Is the New Sh*t  slayed me. I am a huge fan of Frank’s metal artwork but to see it take on life with flesh and blood is beyond price. Frank is a master at making the viewer rethink the universe.

Every one of his models provided a well-tuned extension of his creations – from live rats in cages atop their heads to reticulated metal bones and swinging tails, to the heaviness of being human. Frank Strunk III is the king of wearable art.