A Conversation with McArthur Freeman 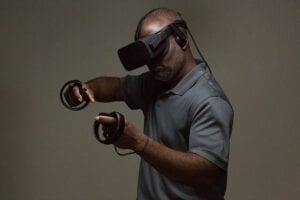 McArthur Freeman is a multimedia artist who uses digital tools to create physical and virtual sculptures. Inspired by his background in surreal and figurative painting and drawing, his current 3-D printed sculptures resemble misshapen biological specimens presented for study.

He’s an Associate Professor of Video, Animation and Digital Arts at the University of South Florida, currently featured in the Dunedin Fine Art Center’s Vespertine exhibit. He’ll be discussing his work in DFAC’s Coffee and Conversation series.

We began our conversation by discussing his artistic inspirations.

McArthur Freeman: There are artists who I’d say my early paintings and drawings look most like, and then there’s who I was getting my painting inspirations from, which is much broader.

I think they were related to a lot of the Pop Surrealists from the time like Mark Ryden and Todd Schorr. I was also looking at Kerry James Marshall and Kara Walker, and Michael Ray Charles. They were using a lot of characters, cartoons and world-building, which is an interest of mine. I used a lot of fairytales and fantasy as a way of telling historical narratives. 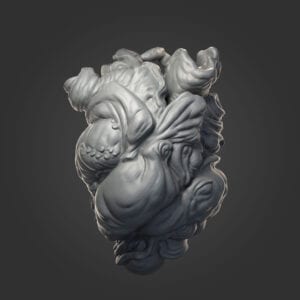 Someone who may not seem so evident, and maybe relates more to my current work, now, is Inka Essenhigh. I’m interested in that kind of malleable cartoonish feel and figuration in combination with abstraction. Her early paintings had figures in them that were barely recognizable as figures. They were very inspirational for me.

Tom Winchester: The forms in your 3-D printed works look like organs, tumors or cancers. How would you describe what they look like?

MF: I think of them as related to the body, and influenced by the body and anatomical structures. In some ways I see them as body parts combined, or biological adaptions—they’re biological ways to describe adapting to social events and relationships. I see them as in the realm of abnormalities, hybrids or distortions. In my artist’s statement, I say, ‘They have orifices, sacs and appendages.’

These works also have a lot to do with play, exploration of form, and plasticity. It’s always been an undercurrent of my work, but now it’s more prominent.

TW: You’ve mentioned that the bio forms root from the idea that the Black experience includes wearing masks, and that the masks become a part of one’s own identity. How has this theme evolved in your work? 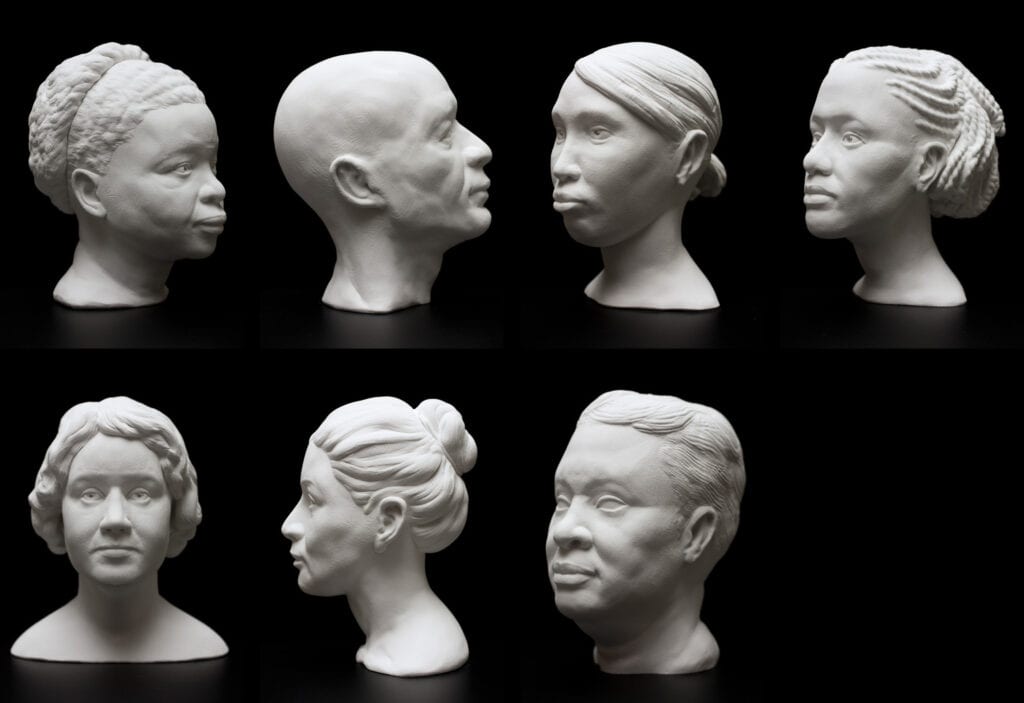 MF: The theme of wearing a mask and it transforming you has been a theme in my work ever since my days in undergrad, even if it hasn’t been on the surface so obviously. In college, I was actually doing paintings of people wearing masks. I was reading Frantz Fanon’s Black Skin, White Masks. I was also looking at W.E.B. Du Bois’s idea of double consciousness.

As Black people move into these white spaces, in order to adapt, there’s a code-switching that happens. When you’re doing that, to some degree, you’re performing. 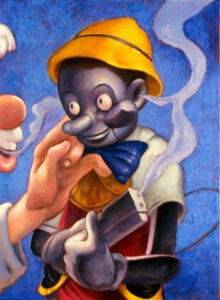 But you when you perform long enough, you adopt parts of that personality. The question is, ‘Where does one begin and one end?’ It’s transformative. At some point, you lose part of yourself, you’re distorted – and you may turn in to something that you don’t want to be.

I don’t think I deal with this theme so directly in the new works in terms of assuming it’ll be easily conveyed by looking at them. It’s more of a jumping-off point for making those works. Whereas, in earlier works, I actually created narratives about it. 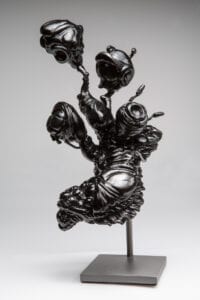 TW: To me, those themes are reflected in your choice of medium.

MF: I’ve always seen an analogy for the process of making the work and the conceptual goals. These abstract ‘specimens’ have been spliced and hybridized, and that reflects the fact that the technology used to create them is a combination of traditional and digital media. I think about that relationship.

I’m also attracted to the idea of making virtual worlds, and creating these spaces that only exist in the virtual space as being analogous to the space within the imagination. Some of these pieces are created using the Oculus Rift, but for the majority of them I’m using Z Brush and similar programs.

TW: How do you feel about in-person, gallery-based exhibitions of VR? Is a virtual, 3-D environment actually more intuitive at home with one’s own Oculus? Is a hybrid model more ideal?

MF: The idea of creating an immersive, virtual space and having people actually in those spaces, is exciting to me. It’d be great to not only have them in that space, but actually trigger some impact on it.

Whether it’s ideal to be experienced in the gallery or at home on their own system, I think it depends on the piece. There’s a social component in terms of being in the gallery, wearing the Oculus, and everyone else being able to see you, or doing it together. It has a different feeling, and there are opportunities there that are different from being at home, sitting in your chair.

There are ways to have the actual, physical environment impact your experience. There are things you feel and hear outside the VR headset. A visual artist is able to play and push those tools in the gallery in ways that you couldn’t at home. 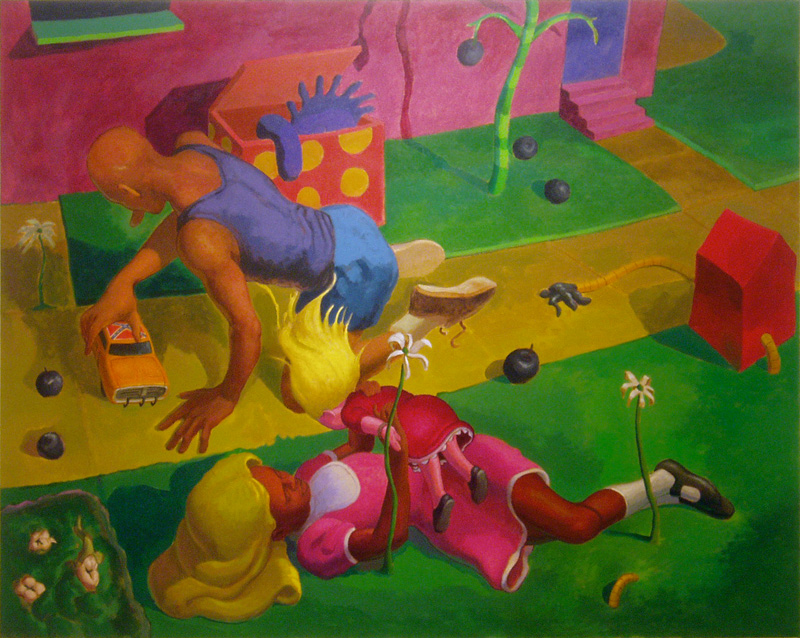 Exclusivity is a factor for the at-home experience. I’m interested in doing something for a broader audience. It’s a different audience who has the Oculus at home. Who is the person who has an Oculus?

For the at-home experience, I would play with more conventions. For example, what got me interested in making 3-D works were toys. So, taking something that everybody knows, and then adapting it. I would do something that’s much closer to traditional games for the at-home audience, and make them more subversive so it’s something we haven’t yet seen in games. TW: What can we expect you to discuss during your conversation with Dunedin Fine Art Center?

MF: I’ll be discussing a recent public art project that has two bronze life-sized figures which were digital files printed and carved using a CNC router. The piece is on view at the C. Blythe Andrews Library, here in Tampa. I’ll also be discussing how I’ve arrived at this process, and transitioned to the current work, and where it’s going. It’ll be a nice overview of the sculptural works from the last ten years, or so.