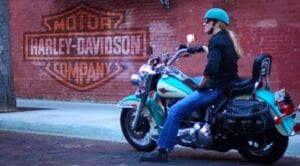 At night I get stressed when I try to decide which streamed movie to watch first.

I used to ride a motorcycle. It was    a calculated risk. One that I knew could backfire but the joy was bigger than the possibility of a downside.

With the sun out and temperatures still in the 80s, nothing was better than feeling the wind in my face riding my motor bike down undiscovered country roads. I always wore a helmet, rode defensively and planned ahead.    My friends thought I was crazy,    but the risk was worth the joy.

After moving to an area congested with traffic, my  risk tolerance dropped like an anvil. The risk was no longer acceptable. I sold my beloved bike.

Going to a film festival in the middle of a pandemic has a similar feeling. No matter how careful you are or what steps are taken to protect you from the invisible virus, there is still a chance it may well find its way into your life, or those you love.

A calculated risk is one that will make you either a hero or a fool. At best neither. We all have to make our own decisions and take personal responsibility for them.

I finally feel as though I can venture out and take that calculated risk in a small dose to experience what I love in life. I want to experience the light of film, reflecting off the large screen with others around me. I want to teach people what I know so they can create more film. 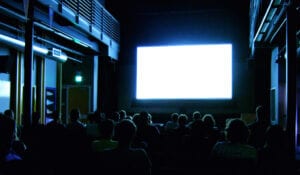 “Watching a blank screen” by ToastyKen is licensed under CC BY 2.0

Sunscreen Film Festival is braving a second live run during the pandemic. Many guests are contemplating attending, even though so many festivals offer streamed versions of their films. Casts and crews are stepping into the unknown, many with vaccinations under their belt. Is it worth the risk? That can only be answered by each individual.

What is the difference between streaming a festival and attending one live? Speaking as a filmmaker, I can tell you there is nothing like sitting in a dark theater with your contemporaries, listening to the audience react to the sound and vision of a film you gave up a significant part of your life to create. There is no better opportunity to network with those who can move your career in the direction of success. The amount of information you can assimilate from in-person workshops can not be matched with a Zoom seminar.

Festivals are a time of interaction between directors, producers, writers, actors and every level of those involved in creating a story for the screen. Interacting with fellow filmmakers in a safe fashion contributes to collaboration.

I believe the Sunscreen Film Festival and AMC Theaters have done everything they can to make the 2021 festival a safe place. 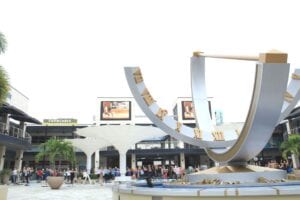 How Safe Is It?

Sundial AMC 12 Theatres’ safety protocol includes a scaled–down environment which requires safe distancing and highly sanitized venues. Ticket sales are capped at a 50% capacity (spread out), so even with a pass, it’s first come first served.

The festival added more screens and second film screenings to alleviate crowding. Masks are required at all times unless you are eating or drinking.

This will not be a 100% normal festival in that Q&A sessions will not be held inside theatres but outside the theatre entrances or in a mezzanine area upstairs. This allows a full 30 minutes between each film for sanitizing.

There will be a 20-foot step and repeat background inside and outside for socially distanced selfies. There will be a slightly different version of “the red carpet” on opening night.

Of the 160 films in this year’s festival, 112 filmmakers have RSVP’d that they’ll be attending. Thai filmmaker, Tom Waller, will travel to the US for an Iowa screening of his film The Cave and then on to Sunscreen for the entire festival. Based on true events, The Cave tells the untold story of the rescue that captivated the world from the point of view of the unsung heroes in the Tham Luang mission to free the trapped 13 members of the ‘Wild Boars’ soccer team, culminating in a triumphant outcome against all the odds. The Cave screens Friday night at 8:30 pm.

Other Films of Note

More than Miyagi: The Pat Morita Story screens Saturday May 1 at 2:20 pm. The Oscar-nominated actor best known for his role of Mr. Miyagi (Karate Kid), left behind a painfully revealing autobiographical record of his much-too-brief time here on earth. Inside the multi-talented performer, we see a path to stardom while working through Hollywood’s discrimination.

From Fat Lolli To 6 Pack Lolli – obese his entire life, real estate mogul and multimillionaire Anthony Lolli accepted his greatest challenge to date as he shed 125 lbs in only 9 months, leading to a fitness competition where he showed the world that nothing is unachievable. Through blood, sweat and tears, From Fat Lolli to 6 Pack Lolli is truly the ultimate transformation story.

The workshops this year are packed with information and feature high–level speakers. Highlights include. . .

Over 50% of Sunscreens films are helmed by women. Festival co-programming directors Ben Daniele, Bryan Williams and Doug Tschirhart concentrated on a great selection of diverse films including LGBTQ, Black, Asian and Latinx.

“Not only is the Sunscreen Film Festival the longest-running mainstream film festival in the Tampa Bay area, it has also become a widely recognized festival around the world.

“To be able to present a safe and clean event and still support the independent film community is great to see. This festival has really put the St. Pete, Clearwater, Tampa area on the film world map – and it’s amazing to see the positive effect it’s had on our community over the years,” says Tony Armer, St. Petersburg Clearwater Film Commissioner and Sunscreen Film Festival founder.
. . .

Find the schedule at
sunscreenfilmfestival2021.sched.com