2017 Best in Shows — A Year of Collaboration

by JULIE GARISTO
A look back at memorable moments in visual arts, theater, dance and music, observed by the Creative Pinellas Journal contributors.
2017 was history-making on multiple fronts, but in the arts community it was all about  banding together, reaching out across the bay and working with peers and mentors to pioneer big new events and alliances, and present high-profile happenings that drew bigger crowds than usual to local arts events. 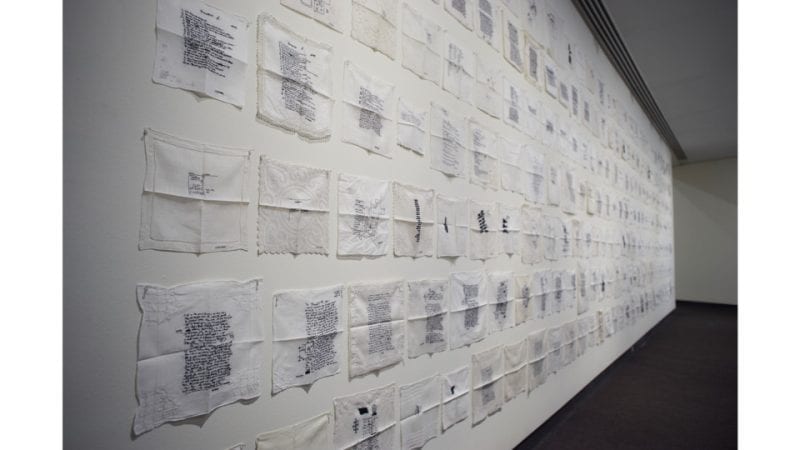 The Skyway Exhibition trifecta: The historic Skyway collaboration demonstrated “that there is an abundance of talented contemporary artists creating work very relevant to the national discourse on art, on par with the rigor found in more established art communities and able to hold its own in any city but thankfully hangs its hat in Tampa Bay,” said Creative Pinellas Editor Danny Olda in his review.

A milestone in the Tampa Bay regional arts community and monumental effort in collaboration, the history-making Skyway: A Contemporary Collaboration held court at the Tampa Museum of Art, the Museum of Fine Art in St. Petersburg and the Ringling Museum in Sarasota.

Standouts included a compelling interplay between by artists Noelle Mason and Gregory Green at the Museum of Fine Art, whose works explored violence and depicted meticulous preparations for mass violence specifically. In Love Letters/White Flag (Book of God) (2016), Mason reproduced journal entries of the Columbine High School Massacre shooters as more than 200 hand-embroidered handkerchiefs. Green’s installation, Worktable #9, He of Righteousness, (Minneapolis, Saint Petersburg) (2017), offered a bomb-building workshop frozen in a moment mid-task, as if the bomb-maker were merely taking a bathroom break.

The sculptural, meditative installations of Babs Reingold and Charles Parkhill used time-worn wood to convey their messages.  In paintings such as Palpable Blur (2016) and Futurist Feelings (2016), artist Walter Matthews displayed works with an equally confident color palette and brush stroke.  One of the biggest attention-grabbers: Akiko Kotani’s imposing yet snuggly  Soft Walls (2016) greeted visitors in the center of the space. Neil Bender of Tampa created an installation for the MFA, and Eckerd College professor Kirk Ke Wang set up at the Ringling. 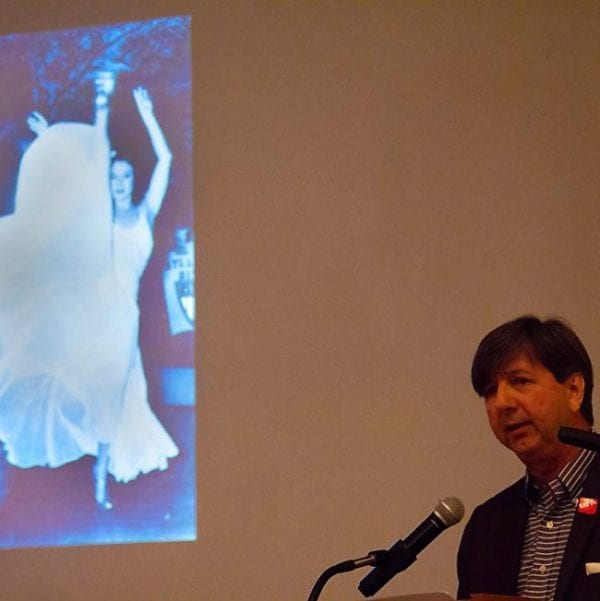 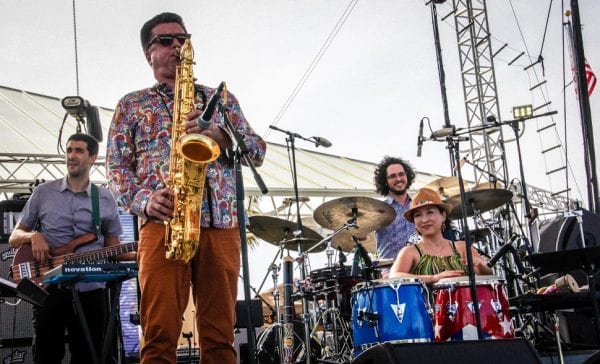 A few days before, La Lucha performed their first set on their own with major guest players  at the Clearwater Jazz Holiday.  Jeff Rupert on sax, Marty Morell on vibraphone and Michiko  on congas joined La Lucha fora tight, wonderfully varied set with their uniquely retooled standards and originals by each of the musicians onstage. 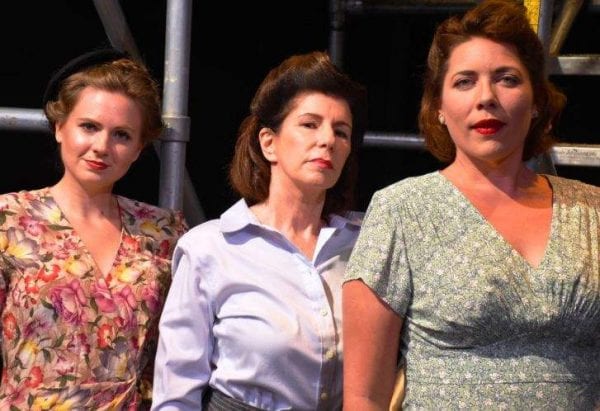 Flying at Studio@620: It’s always great to see a local success story unfold especially when it happens to a gracious and deserving artist like Sheila Cowley. Her full-length drama premiered in an Equity playhouse on May 26 in Upstate New York, earned inclusion in the Piccolo Spoleto Festival in Charleston and was part of new play festivals in Chicago and in Austin in May. Flying’s Tampa Bay full-production premiere featured the dazzling Becca McCoy as the lead, directed by Robin Gordon. The co-production spanned both sides of the bay at Tampa Repertory Theatre in September and The Studio@620 in October. Cowley’s research included poring over a number of oral histories and memoirs of women who flew military planes in WWII so men could go and fight. “Their stories are not widely known but they’re amazing,” she said. “These were all brave women working hard, flying back and forth with target flags so men could practice shooting airplanes from the ground, dive-bombing pilots in training so they could learn how to dogfight, working as test pilots before and after planes were repaired because no one wanted to risk a male pilot’s life doing that, and getting broken-down planes off the ground on their last flight to the scrapyard.” 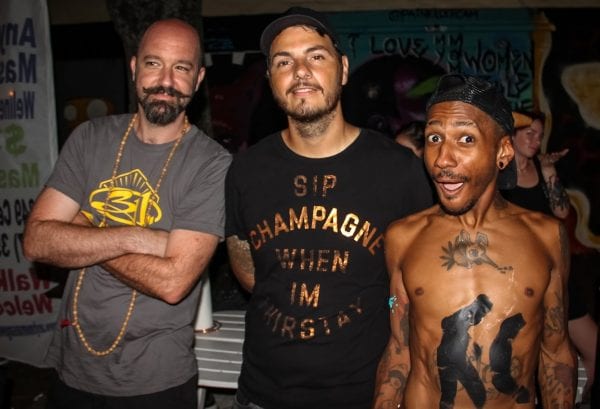 Charles Richardson, Freddie Fred and Cam Parker at the debut of Hive Courtyard.

The fabulously collaborative Hive Courtyard of muralists, musicians and more:  The festive Oct. 15 premiere collaboration took place in tandem with the SHINE mural festival and featured local/regional muralists pulling out all the stops. The event offered the best of both worlds of artistic professionalism and DIY spunk, along with local music, food and retail vendors. If you were feeling the gentrification blues, the Hive event reminded about the magic that sparked St. Pete back to life.  Cam Parker — who recently received publicity creating the Lady Gaga mural in Tampa and getting kudos onstage from the pop diva — went all out and transformed his mural completely in the span of a week. Van Der Luc surprised the crowd with a giant cryogenic bee. Jennifer Kosharek offered “Interesting dichotomies,” and Andrew Spear‘s dragon seemed to come to life.  Other memorable works included Bekky Beukes‘ entrance-wall-encompassing phoenix woman and  Jennipher Chandley‘s intricate portrait.

Our Trail: Performances on the Pinellas Trail

The Shins at Jannus Live

Irma be damned — freeFall Raises the Roof amid hurricane aftermath