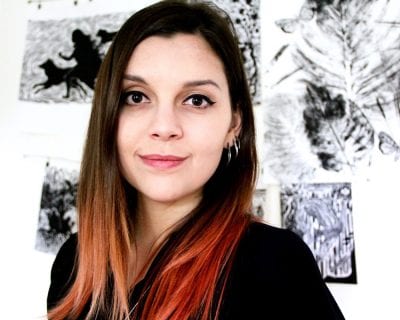 Brandie Dziegiel is a printmaker and art educator based out of Clearwater, FL. Before she received her bachelor’s degree from the University of Maine in art education with minors in studio art and art history she was active duty with the United States Coast Guard for four years. Recently, her relief prints were published in Military Experience and the Arts (MEA) bi-annual publication.

Raised as a military brat, art making was one of the few constants in her life. Since an early age, she has utilized art as an essential tool in expressing and understanding her experiences of the various and diverse environments she integrated into. Her primary focus as a visual artist is to develop narratives that address and generate open discussions about difficult topics pertaining to the human experience and memory.

Exploring trauma through printmaking has become her most significant form of advocacy. She uses the relief printing process as a mnemonic device to approach challenging concepts, such as, gender roles, PTSD, trans-generational trauma, and most recently environmental trauma. She aims to create visual forms of social commentary through woodcuts using energetic, instinctive areas of negative space, juxtaposed with symbolic figurative imagery to express a personal narrative with a universal interpretation. 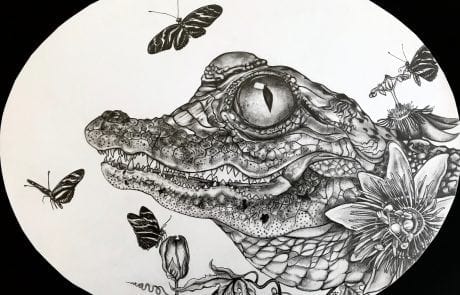 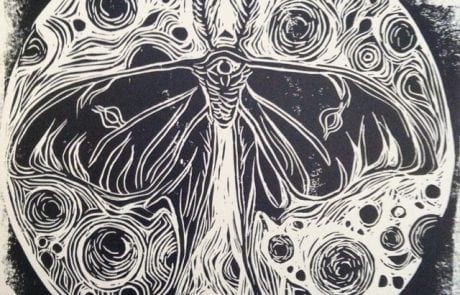 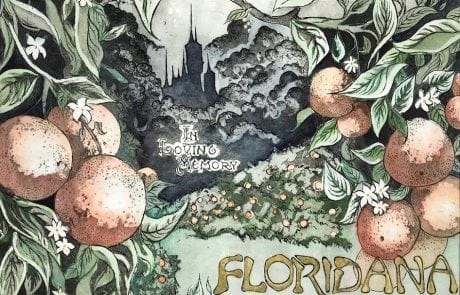 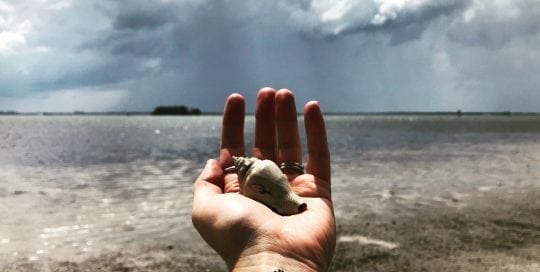 As i’m wrapping up this grant, i’d like to thank Danny and Chris of Creative Pinellas for their support and dedication to the arts–you guys rock! I’d also like to thank my mentor Holly Bird for her phenomenal guidance and endless shared knowledge–you’re a printmaking queen! I truly learned and grew more during this process than I could have imagined. I’m truly excited about continuing on this path and expanding the scope of work I created during this time. It was my goal to take a different approach to my printmaking repertoire and push myself out of my comfort zone. I’m feeling vulnerable so i’m certain I achieved this. This grant offered the perfect opportunity to not only highlight my passion for Florida’s natural heritage, while, more importantly, provided a space to advocate for the preservation of it. I’m looking forward to the opening and everything after. All and nothing. 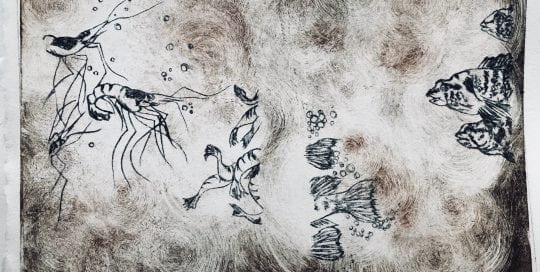 As well as highlighting iconic trees of Florida–trees that are central to several of Florida’s diverse ecosystems, I was compelled to bring attention to the 11 endangered and threatened endemic species of Florida. The reason I chose endemic species is because I realize how little attention is placed on these specific species. It was through my research I learned that not only are most of these species found inland and in south Florida, but all of these species are incredibly small– only a few grow to be as big as 18″. With much of conservation efforts placed on larger mammals such as the manatee and Florida Panther, I couldn’t help but think about size being a factor here… like, “Out of sight of mind”…

To get to the number 11, I reached out to a biologist from ‘Landscape Florida’.

“LandScope America is an online resource for the land-protection community and the public. Developed in collaboration by NatureServe, the National Geographic Society, and many partner organizations, LandScope America is designed to increase the pace and effectiveness of conservation action and investment throughout the United States.”

The biologist provided two lists (vertebrate and invertebrate), each of which had global, federal, legal, and state listings for each animal. From the codes I was able to narrow down which animals are listed threatened and endangered. This process in and of itself was completely eye opening. Once I compiled my list, I began my research of each animal and understand why they are imperiled. The reason being – habitat loss and destruction due to human development and agriculture. After my research, I began my sketches and studies of each animal with intent of framing their prints inside antique frames. One of the goals I had for this grouping of prints was to push myself into the design realm. I didn’t want to place these animals in the center of the frames for multiple reasons–design wise and conceptually. These animals aren’t found anywhere else on this planet. They are on the brink of extinction…Fleeting, but still here. Below are scans of the sketches I did of each animal to scale. The sketches are what I developed my plexi-etching prints from and have since been framed and will be in the grant show. 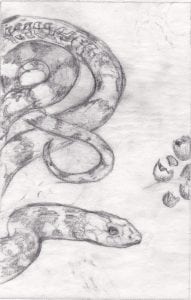 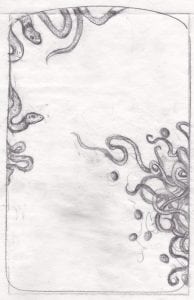 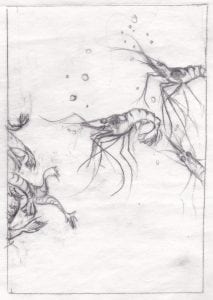 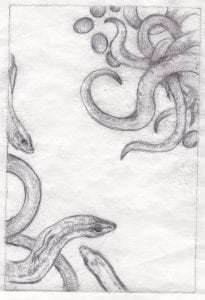 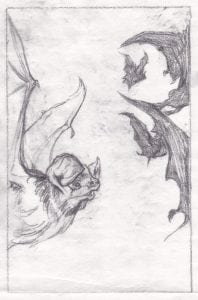 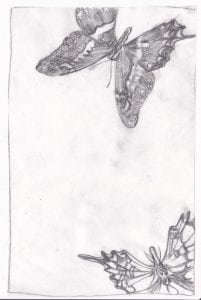 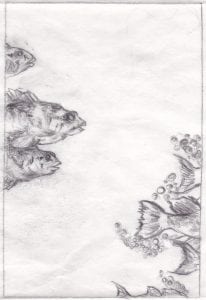 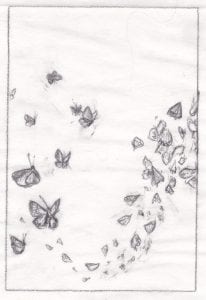 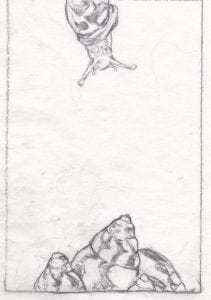 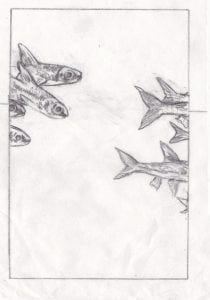 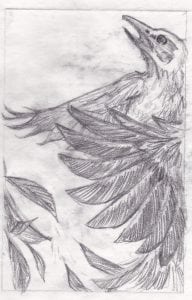 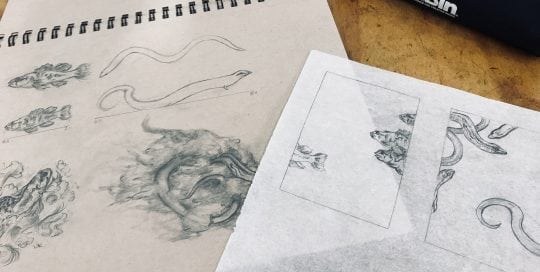 Like many artists, i’m heavily reliant on my sketchbook. I was in 3rd grade when I started my 1st sketchbook. Back then, I strictly used them as a book of drawings. I was very keen on only using it for illustrating, and these illustrations had to be complete and perfect. As I got older, I became less rigid about this device and now I use my sketchbook for just about everything. Within the pages you’ll find poorly handwritten notes, ideas, sketches, plans, etc. All of these elements are conductive to my process and serve as a transparent form of record keeping that I can accurately reflect back on. 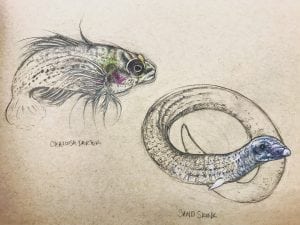 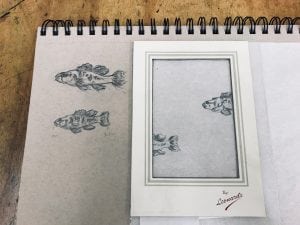 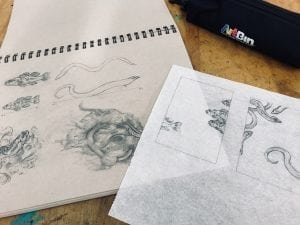 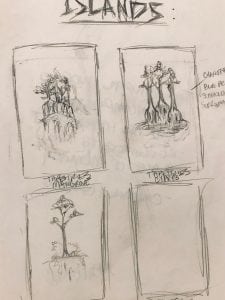 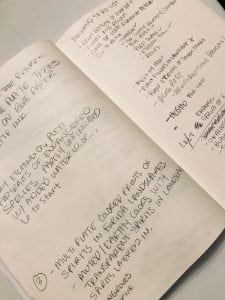 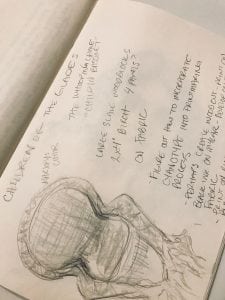 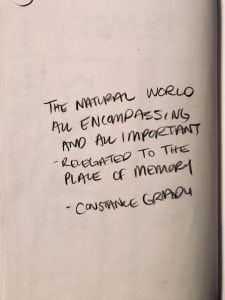