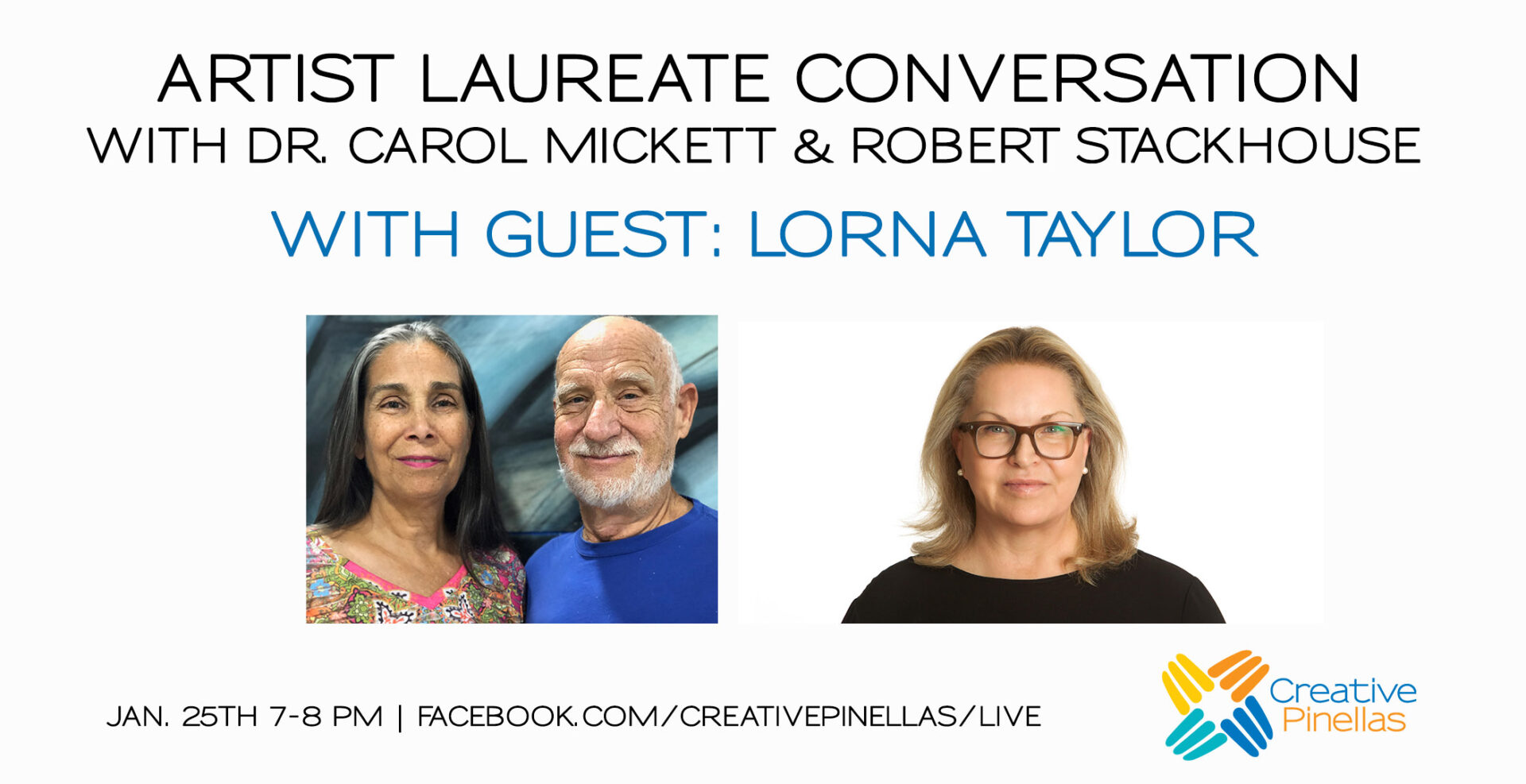 Tune in Monday, January 25th for the next Artist Laureate Conversation with Dr. Carol Mickett and Robert Stackhouse, current Creative Pinellas Artist Laureates and the artists behind Mickett-Stackhouse Studio and. Joining them for this episode they call “Looking Forward” will be business and community leader Lorna Taylor.

Taylor is the President and CEO of Premier Eye Care, a company that has been ranked “Florida’s Best Companies to Work For” for eight consecutive years and has also been ranked repeatedly as one of the state’s fastest-growing companies by the Florida Business Journals. Taylor and her leadership team embrace a culture where the triple bottom line, “people, planet, profit,” that is rooted in diversity, equity and inclusivity.

Personally, she is involved in a wide variety of community and nonprofit causes. She has board positions with The Dalí Museum, Tampa Bay Businesses for Culture and the Arts, Arts Conservatory for Teens, Preserve Vision Florida, University of Tampa Board of Trustees, The Athena Society, and The Foundation for a Healthy St. Petersburg.

Taylor has also been involved at the board level in the International Green Belt Movement for many years. Led by founder and Noble Laureate, Wangari Maathai, the group built a coalition of women in Kenya, paying for every tree seedling they planted. From this initiative, the women started businesses and improved conditions in their communities. Since 1977, the movement has planted over 50 million trees, and the effort has had a profound impact on making steps toward environmental sustainability, eradicating poverty and empowering women.

Reflecting her approach to work and community, Florida Trend named Lorna Taylor as one of Pinellas and Hillsborough counties movers and shakers, and she was named by Tampa Bay Times columnist Ernest Hooper as one of the 10 most intriguing people of Tampa Bay. Taylor has received numerous awards for her business, community and philanthropic efforts including being named entrepreneur of the year by the Business Observer, receiving the Tampa Bay Ethics Award from the University of Tampa’s Center for Ethics; the International Women’s Day Leadership Award from Working Women of Tampa Bay; the Mildred M. Baynard Founder’s Award presented by Preserve Vision Florida; the 2019 Patron of the Arts IMPACT Award by Tampa Bay Businesses for Culture & the Arts; the Pinellas County Urban League’s 2020 Whitney M. Young, Jr. Leadership Award; the 2020 Dali Museum Morse Award; and, the 2021 Tampa Organization of Black Affairs, Dr. Martin Luther King Jr., Corporation Leadership Award.