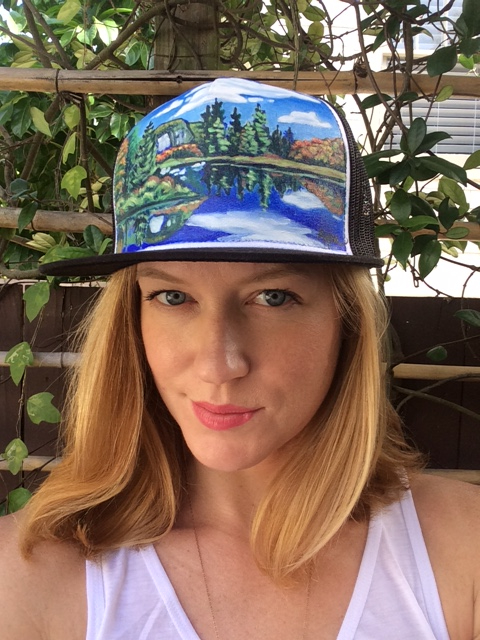 Anna Ayres began her painting career well before she began painting. A childhood immersed in the four seasons of rural Vermont showcased the natural
world to Ayres, initiating an early sense of wonder and gratitude for it. In winters, the Ayres family skated by lantern on icy cornfield valleys. In summers, a waterfall in the woods transformed into a cold swimming oasis. In fall, she and her siblings sold garden pumpkins and gladiolas by the side of the road and spring burst with fresh life and color of overwhelming magnificence. To Ayres, the land was a giant, magical playground in which to play. Every day brought her to the outdoors, showing her something newly beautiful and different to be appreciated. These experiences afforded Ayres a reverence for the natural landscape, one that inspired her creativity then and continues to influence her work today.

At the tender age of 14, Ayres left the frozen February tundra of Vermont for the dusty dirt roads and lush mountainscapes of Puerto Rico for one week. She travelled with her church youth group to several locations on the island, participating in community projects with schools and churches. During her time there, she discovered a love for travel. She loved the newness of the warm nights, the smells of cooking rice and beans, the mangos littering parking lots. This new found love became a theme unwilling to subdue.

Ayres struck gold while studying English at the University of Vermont when she enrolled in an acrylic painting course. This led her to accomplish a minor in Studio Art.

After a semester studying abroad in London, where she visited many artists of history in London’s great galleries and museums, she began exploring the medium in more earnest. Ayres’s curiosity for different places and cultures led her to travel in her spare time after graduating college. She explored the western United States, Europe, Costa Rica and Mexico. Upon each return home to Vermont, she delved further into her passion for painting, translating both her travels and home on canvas.

Predominantly self-taught, Ayres began exploring oil paints several years later. She found oils more expressive, with a richness unparalleled by any other medium. After 32 Vermont winters, she made the choice to fulfill a lifetime dream to live amongst the birds and palm trees and moved to St Petersburg, FL. In St Petersburg, she trained to teach yoga and uses the practices of yoga and meditation to continue opening her awareness to the greater world in which we live and how she can do her part to make it better.

In addition to her own work, Ayres is committed to working with two St Petersburg-based non-profits in the arts: Nomad Art Bus whose purpose is to offer art
programming to communities with little access, and Creative Clay Cultural Arts Center, a community arts program engaging adults with disabilities. Ayres continues to explore her fascination with the benefits of creativity in the St Petersburg community.

Post Seven: Beginner's Mind Last week I had the opportunity [...]

Post Número Seis: The Balance of a Snowbird Lifestyle

Post Número Seis: The Balance of a Snowbird Lifestyle

Post Número Seis: The Balance of a Snowbird Lifestyle "Love [...]