Chapel on the Hill

Chapel on the Hill, United Church of Christ, is a congregation that teaches and proclaims the gospel, provides meaningful worship, and reaches out to the community and the world to provide love, respect, and acceptance of all. Chapel on the Hill has a long history in Seminole. The very first service was held on February 8, 1963 at Oakhurst Elementary School. Within a few weeks, the congregation grew and the church moved to the Ridgewood Community Senior Activity Center on Park Boulevard. As the congregation expanded they decided to affiliate with the United Church of Christ. A charter was granted and the name became Ridgewood Community Church. A short time later, the Rev Boadway and his wife discovered a beautiful piece of land with a house on the property. The church conference approved the land purchase and today, that piece of land still holds our church and the original house is now the administrative office. The name Chapel on the Hill came about during a conversation when a church member used the phrase “the chapel on the hill.” The words caught on and the name was changed. In 1966, the old fellowship hall was built to accommodate the Sunday School. In 1971 the congregation voted to build a new sanctuary and on March 9, 1973, the first service was held in the new sanctuary, which is still part of the expanded campus. In 1997 a vision was established for Chapel on the Hill and the church began to grow. With the addition of two organs, a piano, a new fellowship hall, remodeled sanctuary, new pews, carpeting, new sound system and a totally remolded campus, the church prospered. Although Chapel on the Hill has changed dramatically over the years, one thing is certain, the best is yet to come. 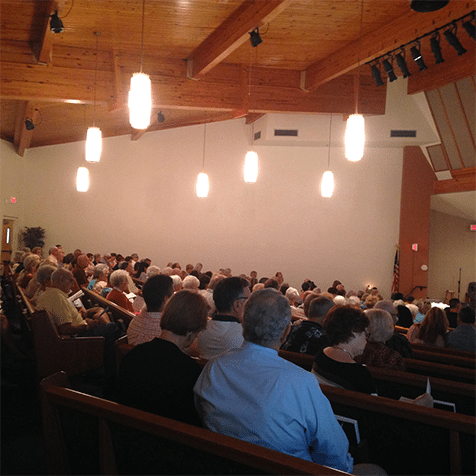