This year the Festival is pleased to announce two special awards, in conjunction with the mission of encouraging an appreciation of Latin American arts and the pursuit of social justice throughout our Hemisphere. 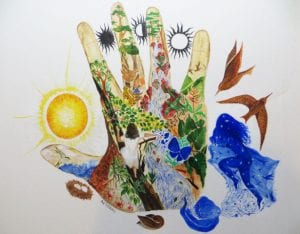 The awards will be presented on October 19 at the Gilbert Chapel Gallery during the Festival’s award ceremony. The festival’s first award for Lifetime Achievement in Social Justice, will be awarded to Ana Maria Vasquez, a painter and muralist known for her commitment to the people of the Americas.

Ana Maria Vasquez creates intricate paintings and murals that tell complex stories about the environment, nature and the people who inhabit the planet. Her work is based in Central American traditions and mythology, and deeply rooted in social and environmental justice.

You can watch a short film of Ana Maria giving a guided tour of her paintings, produced by Victoria Jorgensen.

Love Has No Borders from Victoria Jorgensen on Vimeo.

The Tampa Bay Latin Film Festival is also pleased to announce that sculptor Carlos Arturo Camargo Vilardy has been selected to receive this year’s award for Lifetime Achievement in the Visual Arts. 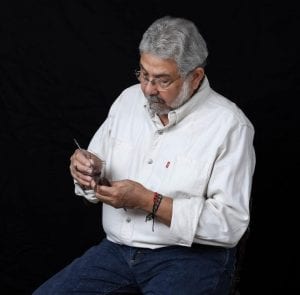 Vilardy obtained a BFA with a specialty in sculpture from the Universidad del Atlantico in Barranquilla, Colombia in 1978.

He later studied at the Universidad Nacional de Colombia and at the Boston College of Art. He has taught at many schools and universities on the Atlantic coast of Colombia and created monumental sculpture for private and public spaces in Barranquilla and La Guajira, Colombia. 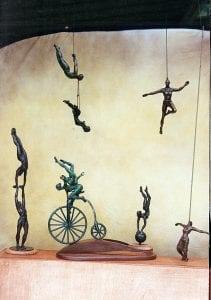 Mr Camargo Vilardy is equally interested in abstract sculpture and the more figurative kind. The media he favors are bronze, steel, forged iron and wood. He created a series about life in the ocean. 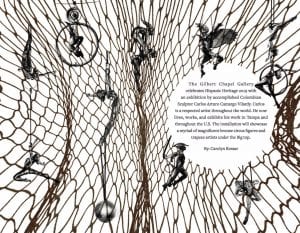 During the month of October, Camargo Vilardy’s circus sculptures will be exhibited as Arturo’s Circus at the Gilbert Chapel Gallery, 212 3rd St. N. In downtown St. Petersburg, sponsored by the St. Pete First Art Collective. The exhibition opens on October 12 from 5-9 p.m. during Second Saturday Art Walk.

You can watch a video introduction to the exhibition and see Carlos Arturo Camargo Vilardy at work, from creating sketches to pouring molten bronze, wielding a blowtorch and fine carving, from the artist’s Facebook page. 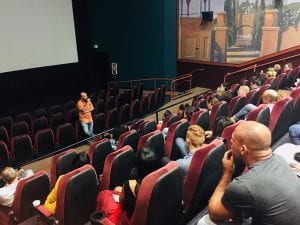 The Festival’s screening committee selects films in categories including romance, history, the complexity of family relations and social activism from Argentina, Brazil, Cuba, Ecuador, Mexico, Switzerland and the United States. 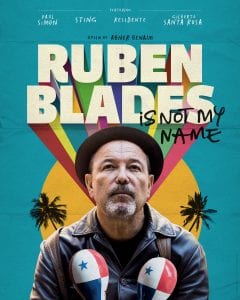 The Festival presents Retablo (Director Alvaro Delgado Aparicio, 2018), Peru’s submission to the 2020 Oscars, as well as the documentary Ruben Blades is Not My Name (Director Abner Benaim, 2018) about the Panamanian singer, songwriter, actor, musician, activist, politician and social justice icon. 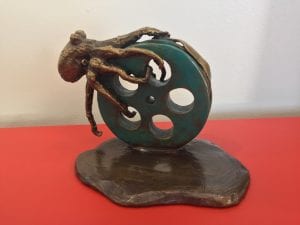 Filmmakers who submitted their films for consideration are eligible for the El Pulpo award. El Pulpo criteria: create a work that best draws the audience into a compelling story while mastering the multiple tasks of filmmaking. 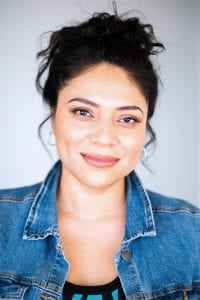 The 2019 El Pulpo award is a bronze sculpture created by artist Carlos Arturo Camargo Vilardy for the Festival. The El Pulpo will be awarded on October 19 by Mexican filmmaker Claudia G. Covarrubias. Covarrubias produced the comedy film, El Idolo, which was awarded the El Pulpo at the inaugural Tampa Bay Latin Film Festival in 2018. In 2014 Claudia founded Cine Bajo el Cielo, a nonprofit organization dedicated to teaching filmmaking in rural and urban communities in Mexico.

How did the festival begin?

From 2012-2015 I owned a Latin American art gallery, that brought me much more into contact with the arts community.

For a few years, I volunteered with Sunscreen Film Festival to help program Latin American film, and in about late 2015-early 2016 had the idea of an independent film festival focused on Latin American film. My friend Ann Marie Cash encouraged me to go with the idea and at some point, she started telling people that I was putting on the festival and that was very inspiring.

What is the mission? Quality films vs. enlightenment and consciousness-raising?

I would like to say that it is both and that the process of selecting films results in both.

What has local response been to the festival?

The local response has been very good, and some of attendees from the first year have become involved in this year’s festival.

What is the international response by artists-filmmakers?

In only our second year, we can’t claim to be a big blip on the radar, but I believe the filmmakers who know us have respect for what we are attempting to accomplish.

I can say that the festival has clearly helped put Tampa Bay into the consciousness of the foreign film community. Of course, Sunscreen Film Festival has accomplished that on a much greater scale, and so I believe we are just adding and enhancing what Tampa Bay now has, along with the Tampa International Gay and Lesbian Film Festival.

Any significant highlights of this year’s selection?

We don’t solicit films on specific topics generally, but we can notice that there are trends. This year we have a nice diversity, but there is an undercurrent in some [films] of concern for social justice, diversity, women, immigrants and artistic expression. 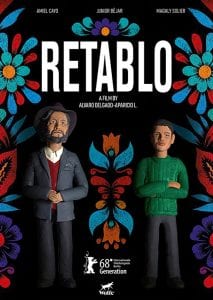 Segundo Paucar, a 14–year–old boy, wants to become a master story-box maker like his father, to carry on with the family legacy. On his way to a community celebration in the Andes, Segundo accidentally observes his father in a situation that shatters his whole world. Trapped in a chauvinistic environment, Segundo will try to deal in silence with all that is happening to him.

A compelling and revealing story of an invisible island — Puerto Rico.

It’s told through the eyes of Juan Segarra, a Harvard-educated man who having become acquainted with the history of his island home and its relationship to the United States, chooses to embrace the independence movement and becomes a member of Los Macheteros, a group dedicated to achieving its goals through armed struggle. 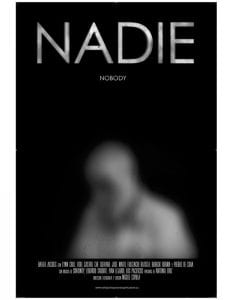 Rafael Alcides was once a widely-known and celebrated writer of the Cuban revolution. Now a stranger in his own country, he tries desperately to save his unpublished novels before the ink literally fades from their pages.

This is a story of love and deception in the Cuban revolution, as seen through the eyes of someone who was initially mesmerized by its possibilities. Director Miguel Coyula has created a pop-culture collage combining clips from old movies, photographs and imaginary conversations, held together by the magnetic personality of raconteur Alcides. (The screening includes a Q&A with Director Miguel Coyula.)

What should attendees know?

All events require tickets. Tickets [and festival passes] can be purchased here. There is no assurance there will be day–of–film tickets.

What is NOT TO MISS?

That’s hard to say, each film is unique and meaningful.